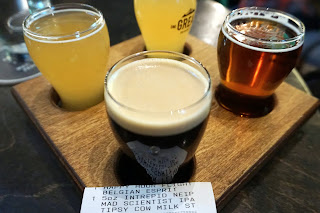 We decided to check out One Great City Brewing Co. in the snowstorm because it was so close to the hotel and the Polo Park Mall.

Let me start this by saying that I have been less than impressed by Canadian beer, including Canadian microbreweries. I don't know why, but I usually feel like the beer I've had in Canada just tastes like watery beer (think Bud Light), even if I go for a hoppy IPA. So, suffice it to say that my expectations for the beer here were on the lower side of medium. 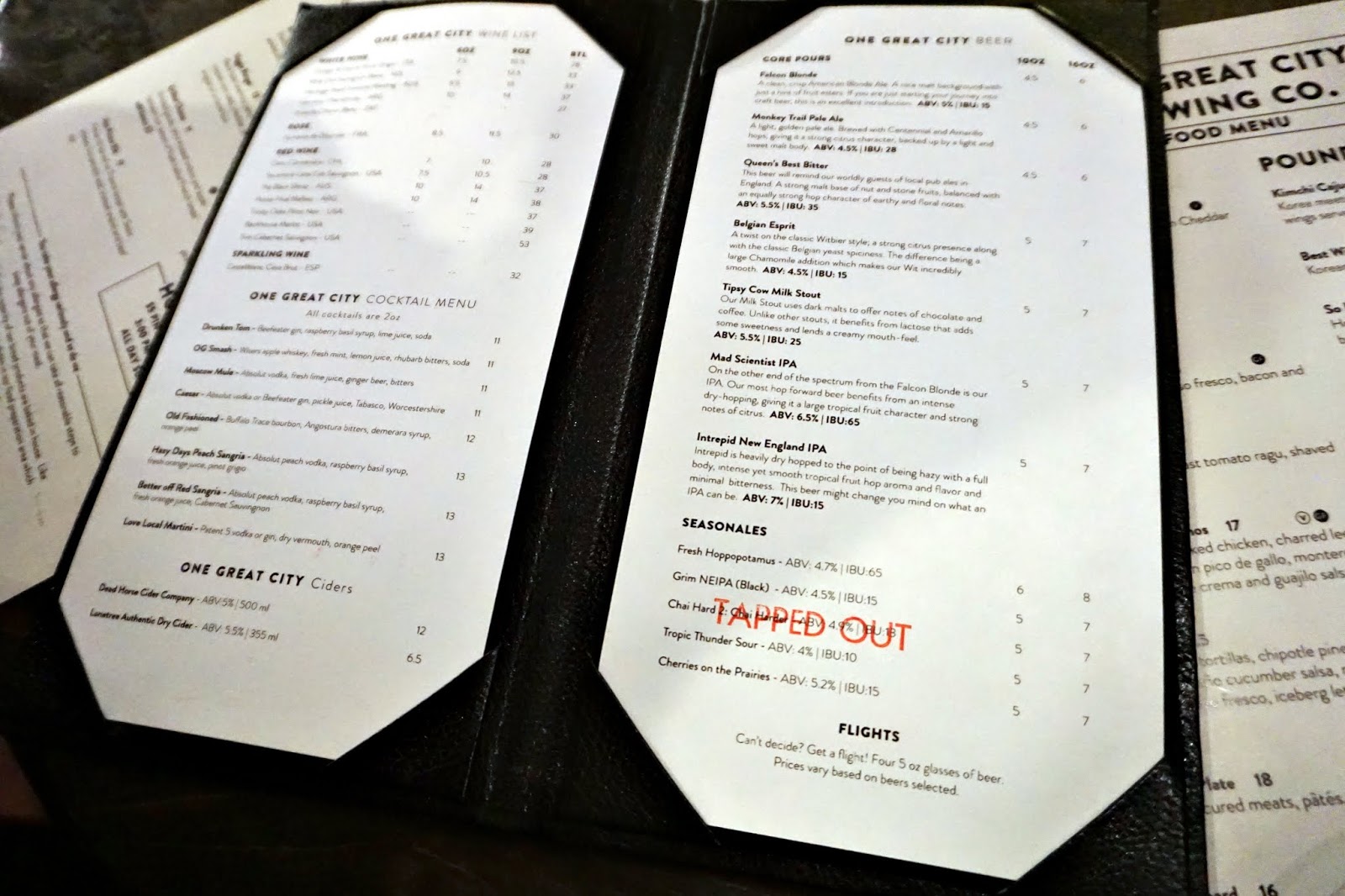 Since we visited on a Sunday, they were running an all-day happy hour promotion. This meant that the flights were each $5, which was pretty darn reasonably priced. 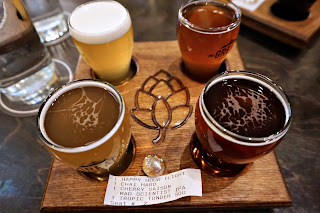 Meredith's Flight:
My flight is (clockwise from upper left) - Chair Hard 2, Cherry on the Prairies, Mad Scientist IPA, Tropic Thunder. I decided to go mainly for the seasonal flavors, but had to add the Mad Scientist IPA because it was described as a hops-forward IPA, which basically just screams my name.

I am very pleased to report that none of the beers I had tasted like watery beer! You don't know how worried I was that the IPA was going to basically taste like a Bud Light after having an IPA at Bell MTS Arena earlier that was basically just that. Even though the menu said "tapped out" on the Chai Hard 2: Chai Harder, our waitress said that it was actually available and they had just put it on nitro, so I was so happy that I could get a chance to try it.

I've never had a chai flavored beer before, so I definitely wanted to check it out. The chai flavor was very evident and it tasted very light. It was a pretty darn drinkable beer. It was very smooth and creamy, which may have been because it was on nitro. I am so happy the Mad Scientist IPA was so good. It's on the main rotation of beers, so I can definitely tell you that if you're a fan of hoppy IPAs, definitely go for the Mad Scientist. The Cherries on the Prairies saison was quite nice, too. Very drinkable, somewhat sweet, but not too sweet. The flavor was nice and light. Even though the Tropic Thunder Sour was my lowest ranked beer on my flight list this time, it was just unlucky I ordered so many others that I liked more. The sour was fine, but I usually prefer a more sour sour beer with a more fruity flavor.

I would have been happy to have a pint of any of these, which is pretty rare for me. Usually, there is one beer or two in a flight where I'm like..."I'm happy I just had only 4 ounces of this to drink" or else I end up giving it to my dad to finish. 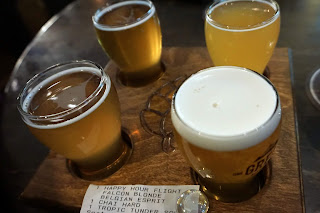 Overall, I liked this flight. My favorite was the Tropic Thunder Sour because it combined a smooth texture with a tartness that I don't generally find in sours, but it isn't as tart as IPAs are. My second favorite was the Chai Hard 2, which they had on Nitro at the time. The nitro made it incredibly smooth. I especially liked that the chai flavor was distinct.

The Falcon Blonde was easy to drink and did not taste overwhelmingly of hops. I can imagine it would be excellent in the summer. My least favorite was the Belgian Espirit. While it was still good, I found it the least drinkable and hardest to finish of the four.

Mom's Flight:
Rankings:
1. Mad Scientist New England IPA
2. Tipsy Cow Milk Stout
3. Intrepid New England IPA
4. Belgian Espirit (Did not like at all)
The Mad Scientist had a very satisfying bite to it that made sipping it the best approach, a feature of IPAs that I enjoy. The Tipsy Cow Milk Stout was also rich and smooth with both the coffee and chocolate notes coming through to the last sip. 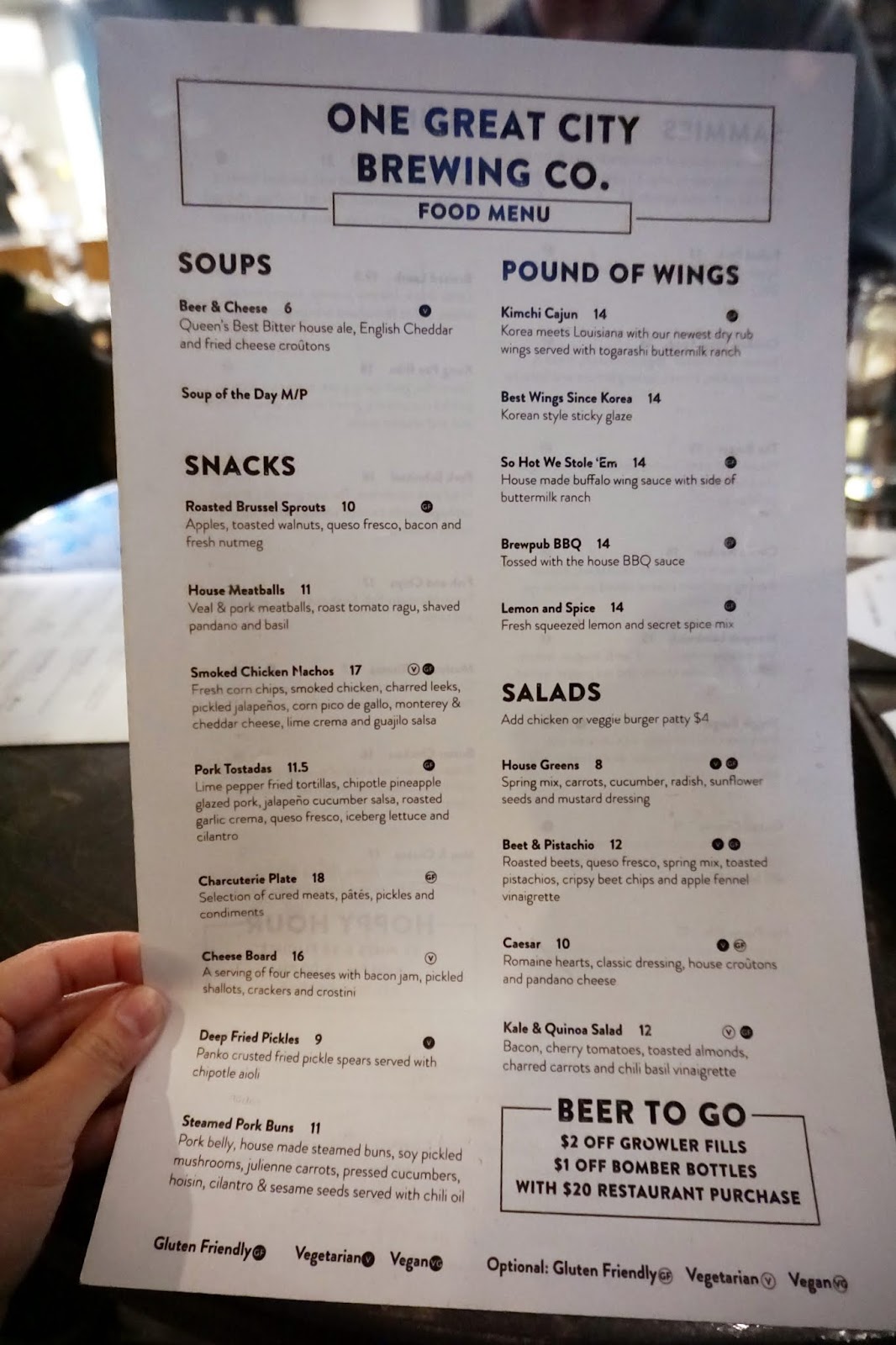 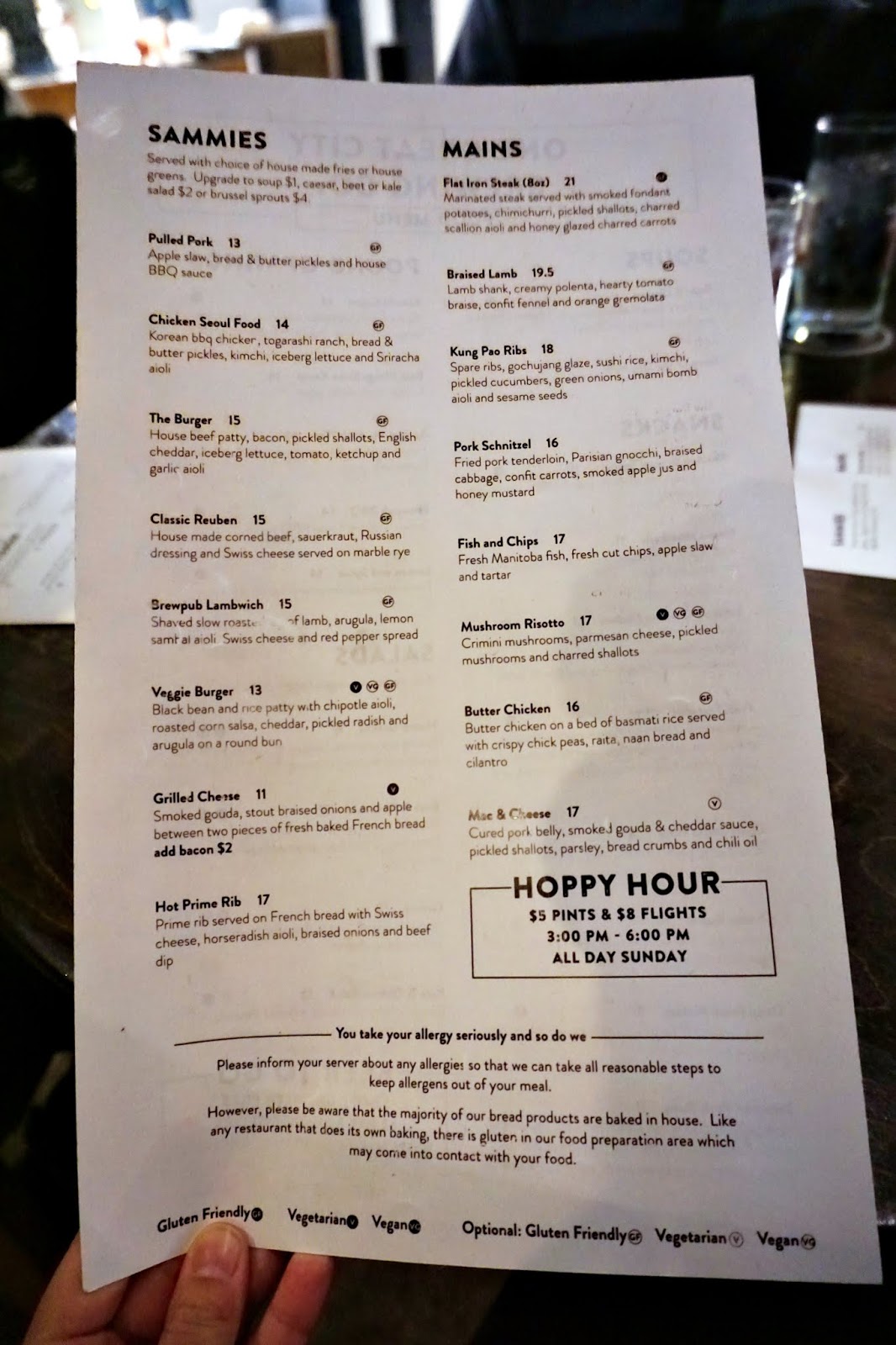 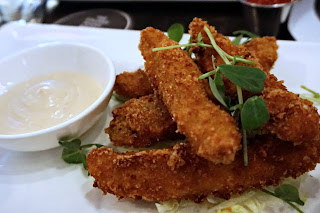 The fried pickle appetizer was one of the best fried pickle dishes I've had. The batter was really crunchy, which is rare since the pickles inside are wet. The pickle spears themselves were not soggy or mushy. They were still crispy and crunchy. 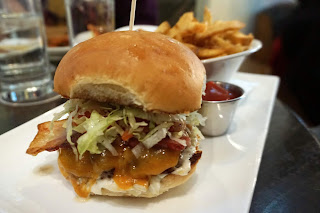 The Burger, while a basic beef patty, but the bacon, pickled shallots, cheddar cheese, lettuce, tomato and garlic aioli makes it a full, rich meal. Ask for extra napkins. All of the ingredients piled so high make it a little messy to eat. 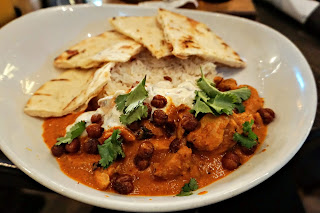 I was craving some flavorful food, so there were a few menu items that caught my eye. I finally decided to go with the Butter Chicken. Basically, everything else I wanted to try was fried and I wanted to go for something not fried for a change of pace.

Honestly, the butter chicken was fine, but it wasn't inspiring in any way. It kind of reminded me of some butter chicken frozen meal I bought at Whole Foods (I can do a review of that if you're interested at some point, just either leave a comment or else email me). I'm not saying it's frozen, but it just wasn't exactly what I expected given the price point.

The flavor was nice and it was relatively spicy, which I really enjoyed, but I just wish it was a little more awesome because I was out to eat and wanted something that I couldn't make at home.  The rice was a little too chunky for my liking. Maybe it was an off night since, as I mentioned earlier, it was a snowstorm and a Sunday night.

Overall, I would go back to One Great City Brewing Co. for the beer and probably just go with bar snacks rather than a meal. 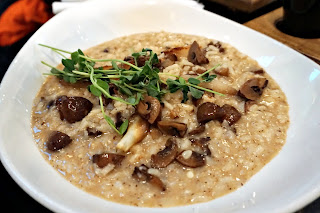 Mushroom risotto had a very nice zip from the few pickled mushrooms in the sauce. The risotto itself was mild but flavorful, and hit the right spot on a cold winter night. 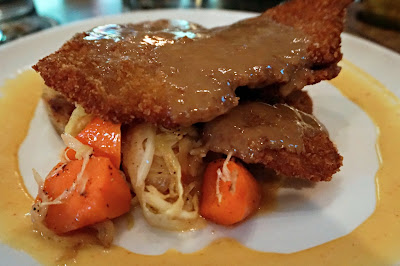 The best part of the pork schnitzel was the pork. On top of that, the portion sizing was crazy for a bar. There were 3 pork cutlets in my one dish. They were pounded thinly. Even though they were thinly sliced and fried, the pork was still tender and wasn't dry.

Overall, this is the opposite case to yesterday's post (Brazen Hall Kitchen and Brewery). Come here for the beer, but maybe pass on the food.