The Donut Pub is one of the best doughnut shops I've been to in NYC.

There are a ton of unique/specialty doughnuts and it is open 24/7, so, let me add another qualifier. The Donut Pub is the best doughnut shop open 24/7.

There are a ton of classic doughnuts, but I wanted to go for some of the more specialty items just to check them out. 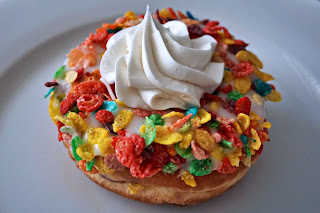 I got the Birthday Cake doughnut because sometimes you just need to let your inner 5-year-old live its best life. I had the choice between sprinkles or Fruity Pebbles, so I decided to just YOLO and went with Fruity Pebbles.

It's also pretty and I thought it may make a cute picture...not sure if that succeeded or not. 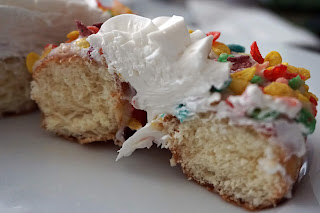 I still haven't gotten my cross-section skills honed yet, but I thought I'd try just to show you that this is a cake doughnut and the frosting is pretty generous and fills the hole.

I am more of a yeast doughnut fan, typically, but the doughnut itself was super nice and fresh.

This particular variety of dougnut was a SUPER sweet doughnut. I mean, look at it, you would never think it would be anything but sweet. The frosting in the center is frosting. I know earth-shattering news. I kind of thought it was going to be whipped cream, so...yeah, it's not. It was a super sugary frosting. I, personally, wish it was that super soft, fluffy frosting that comes on ice cream cake (if you know, you know).

This would be a great treat for someone who has a sweet tooth or if you are okay with sweets and are willing to have a super sugar-rushed child for a while after you give them part of the doughnut.

The price is pretty okay for NYC and for the fact that I am sure this is an Insta-famous dessert that they could easily get Instagrammers to a lot of money for. It costs $3 (as do all the other special doughnuts).

As I was deciding what my second treat would be, I was told by no fewer than 3 people "You gotta get the Maple Bacon Croissant Donut." I still haven't had a Cronut! I know! I tried to get it a few times back in graduate school in 2013, but didn't have luck then. 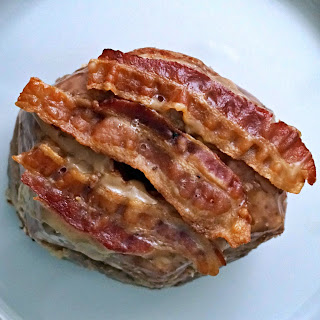 So, I decided I will just take the chance to try this Maple Bacon Croissant Donut that everyone must love so much.

Some other bacon doughnuts have bacon crumbles on top, but The Donut Pub places entire strips of bacon on the top of this masterpiece.

Since, as you see above, I am not a cross-section master, I obviously forgot to do the cross-section of the croissant donut, so you have to use your imagination. It's a super fluffy and flaky croissant in the shape of a doughnut. It's about 2-3 inches tall (idk, I'm not good at measurements).

The flavor of this was SO GOOD. I really tasted like a breakfast in every bite. The maple syrup was sweet and semi-sticky, but it balanced the mellow, buttery croissant flavor and the salty, crispy bacon flavor so well. Everything worked together to be the perfect breakfast treat in every bite (even though I ate it mid-afternoon).

I could also see this being a great choice for drunken bite/hangover bite, especially since it's open 24/7 and it's located in East Village (and another location in West Village).

The Croissant Donuts are slightly expensive, coming in at $4.75 each. 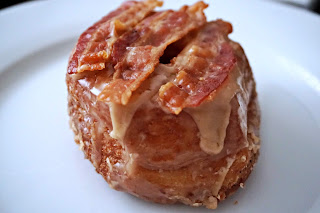 If you don't eat bacon and want to try the croissant donut, don't fear there are a ton of other flavors! I was eyeing the S'mores flavor and the Salted Caramel flavor, too. 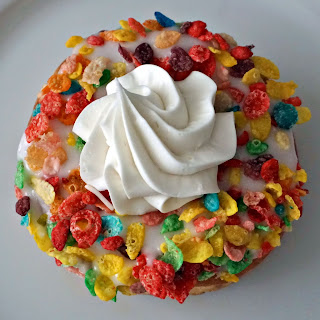 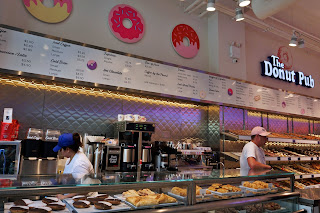 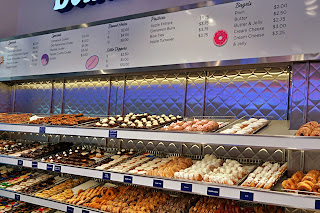