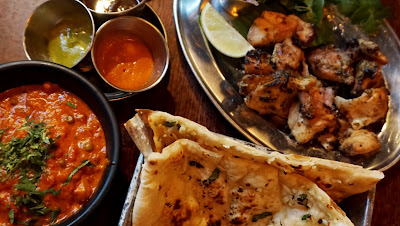 When I started asking around about were to eat in London, one restaurant kept coming up time and time again - Dishoom! So, had to make this our first stop for food on the trip.


Luckily it was within walking distance of our hotel, which was just what we needed after a long flight.

We wandered in without any reservations and were lucky because we got in right away! It was also about 3PM on a weekday, so that may have played a factor. From the reviews online, though, I think it was very odd for us to not have to wait and when we finished our meal there was definitely a queue! 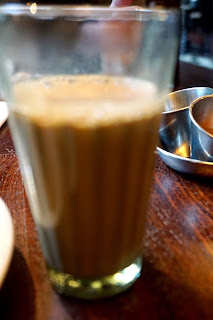 Sorry that this photo is so out of focus. I didn't check my pictures in the restaurant and it was just too late to do anything after I realized it was so bad.

BUT! This was wonderful and I 100% recommend you get it. It's the house chai. It is delicious, not too sweet or too milky. The best part is that the house chai comes with free refills. I believe it was 2.90 GBP.

Also, as a potentially TMI, but just so you know if you're also lactose sensitive. I was able to drink this with zero negative consequences even though I didn't get much sleep and didn't have much food that day (even though I may have gone crazy and stocked up at the Korean Air lounge at JFK thanks to my Priority Pass - leave a comment if I should start blogging about the Priority Pass lounges I visit). 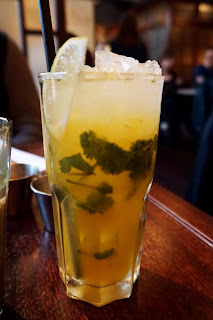 We also got a Passionfruit Sharbat. This was so refreshing! There was a little too much ice for my liking, though. Everything in this drink was so fresh. It does have coriander (cilantro), so if you're one of the unlucky people who thinks cilantro tastes like soap, definitely skip it. Passionfruit, lime, and coriander is a winning combination.

We took the waiter's recommendation on the number of dishes and combination of dishes to order. So, if you're a first timer like I was, definitely ask the expert for advice!

For two people, he recommended choosing one small plate, one protein, one curry, and one naan or biryani. 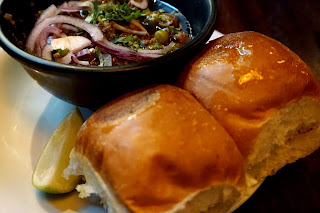 We started our meal with the Pau Bhaji (4.50GBP) from the Small Plates menu. It came with toasted and buttered bread rolls and bhaji made of vegetables like onions, potatoes, peas, etc. and some spices including chili and, I believe, tumeric. The bhaji is semi-flavorful, but not quite as flavorful as I had thought it would be. I kind of thought it would be spicier to balance out the sweetness of white bread. Definitely add the lime, though. 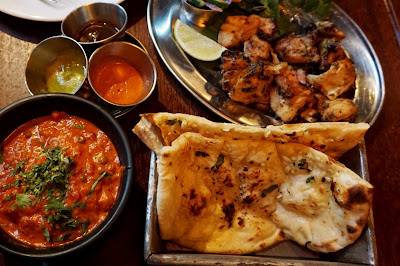 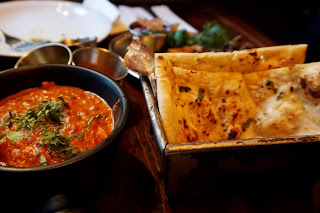 We decided to go for the Chicken Ruby with Garlic Naan. The Chicken Ruby was very good. Again, not very spicy. I could taste a bit of spice, but it wasn't like fire-in-my-mouth spicy. The chicken was VERY tender. 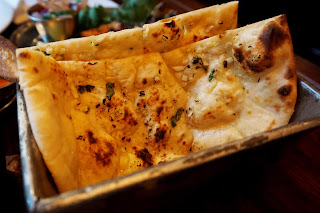 The Garlic Naan was pretty average, to be honest. It was a good choice with the Chicken Ruby, though. It complimented the flavor well. I am kind of curious if the biryani would have been a better choice, though. 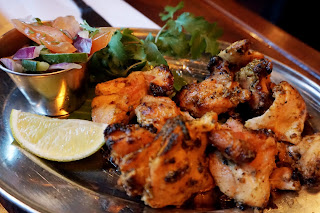 This was a debated choice. We were stuck between the Chicken Murgh and the Chicken Tikka.

I won the debate (if you're in a similar circumstance, play the "you can get chicken tikka anywhere" argument).

We got the Chicken Murgh. This was so delicious! It was so tender and juicy. The flavor was sooo great. With every bite, you get a nice garlic, cilantro and ginger flavor. Definitely squeeze a little lime juice on it for the full effect.

This was seriously the star of the meal (other than the chai, in my opinion). I wish I could find it somewhere else, but maybe it's an excuse to go back to London.

We decided to also go for a dessert. 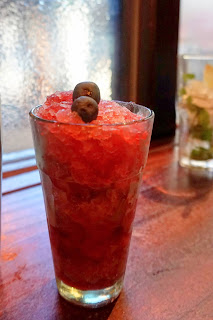 This is the Kala Khatta Gola Ice. Basically, we wanted a nice refreshing way to end the meal.

Honestly, this will NOT be for everyone. But, you'll become a fan the more and more you eat it.

I actually loved it from the beginning. If you're familiar with omija berries in Korea, this dessert has a very similar flavor profile. It has a subtle sweet flavor in the background, but you definitely get hit with the bitter and salty flavors first. You also get a bit of a tart flavor from the citrus fruit.

With each bite, you can really taste each of the flavors separately, but yet you can still taste how well the flavors all mix together.

I may have, by that I mean for sure I did, drink the whole thing including the melted part. I am pretty sure I consumed the most salt I have ever had in a dessert, but it was totally worth it.

The Coal Drops Yard location has a really interesting interior! It is decorated kind of like with an old industrial feel. There are two floors and lots of seating. Even though we were on the second floor right by the overlook to the bar and the restaurant was completely full, it wasn't super duper loud.

If you are a vegan or vegetarian traveler, definitely put Dishoom on your itinerary. You'll feast like a king!

I wish we would have had time to go back for breakfast because the options seemed great and the prices were so reasonable, but alas, not possible on that short trip. Maybe next time! 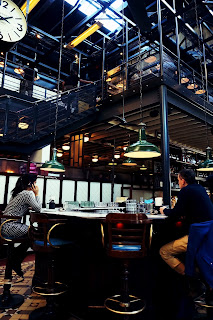 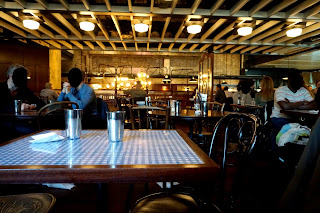 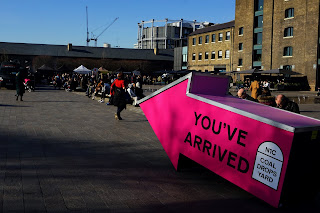 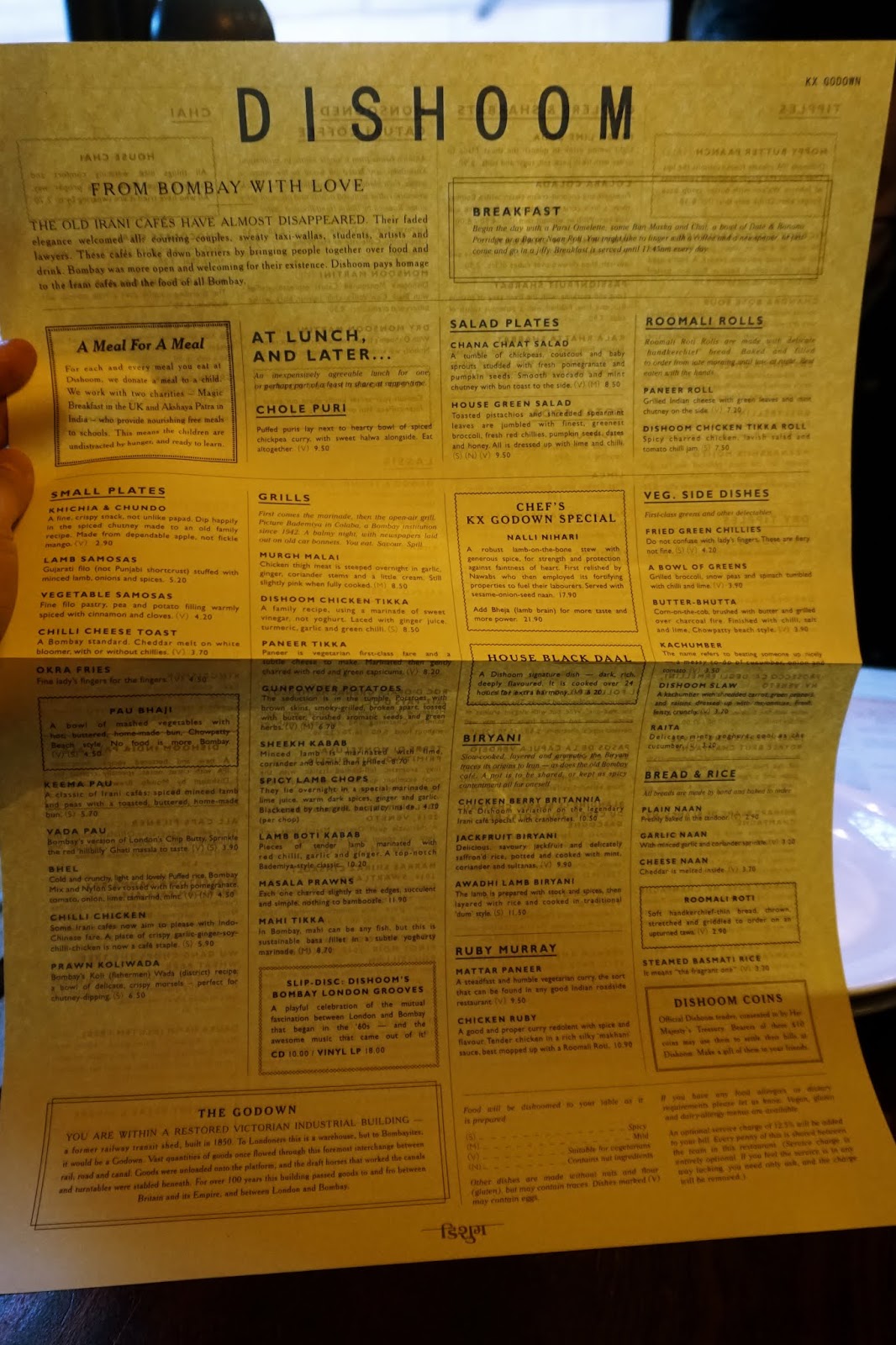 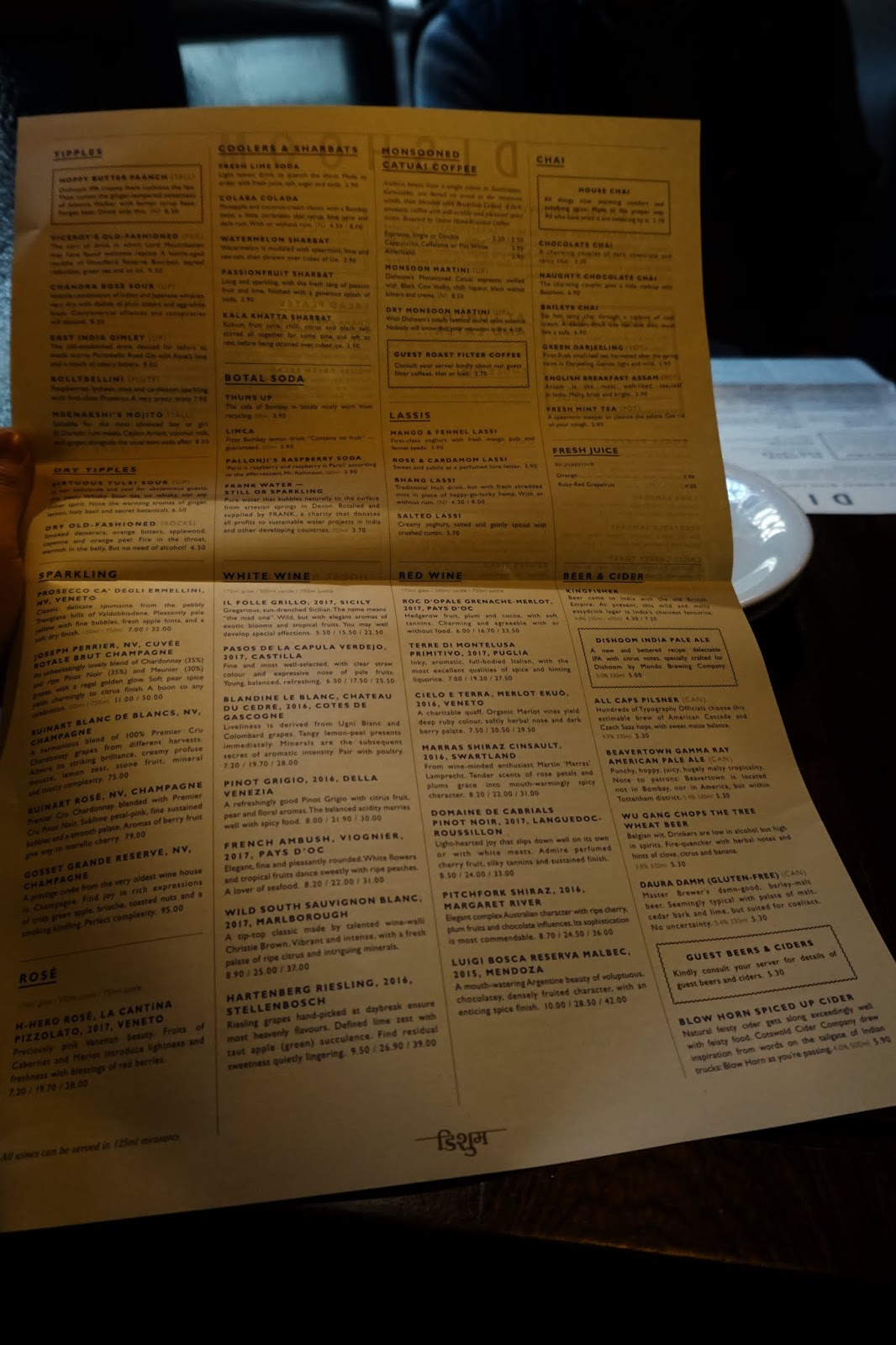 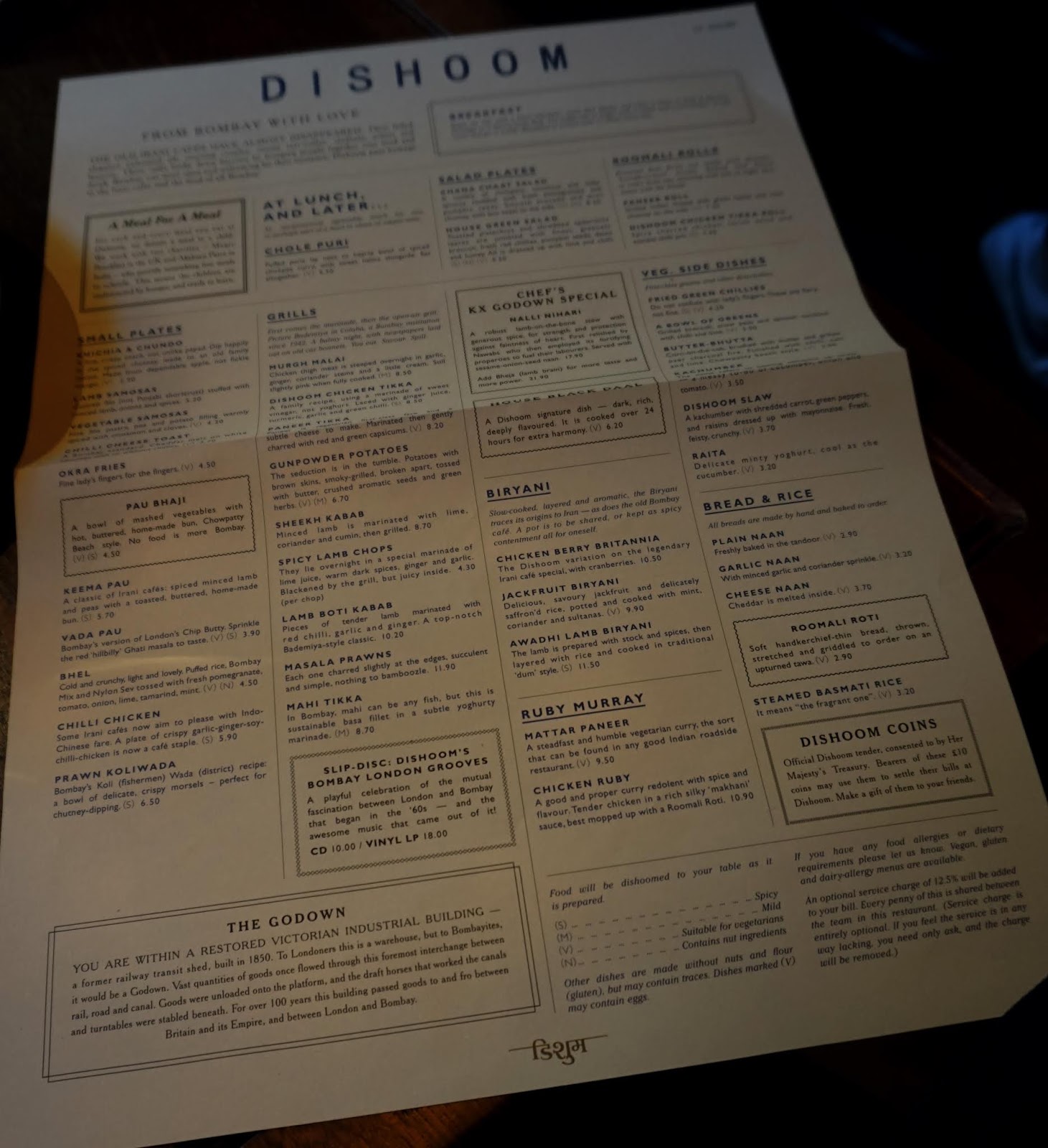 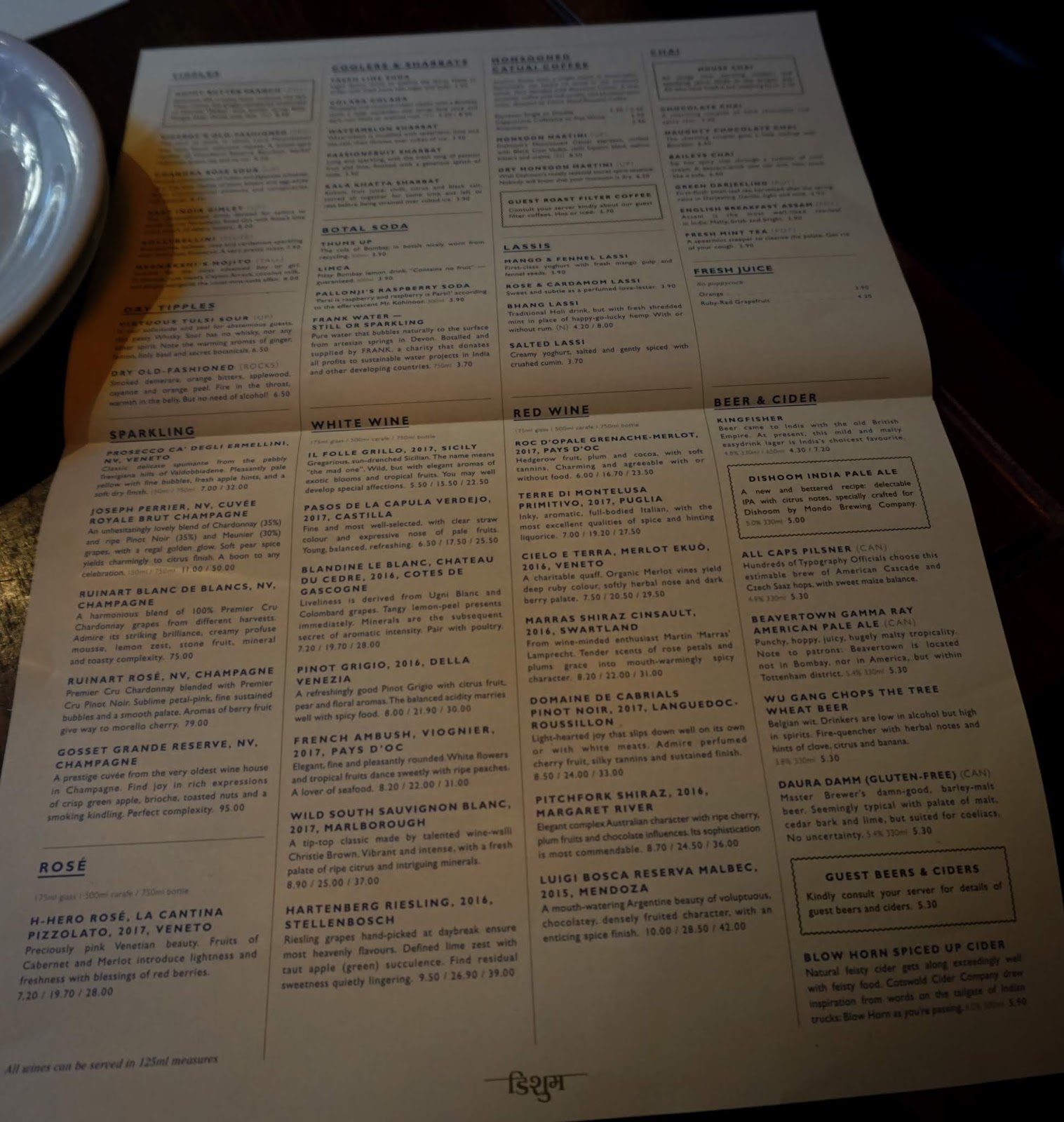 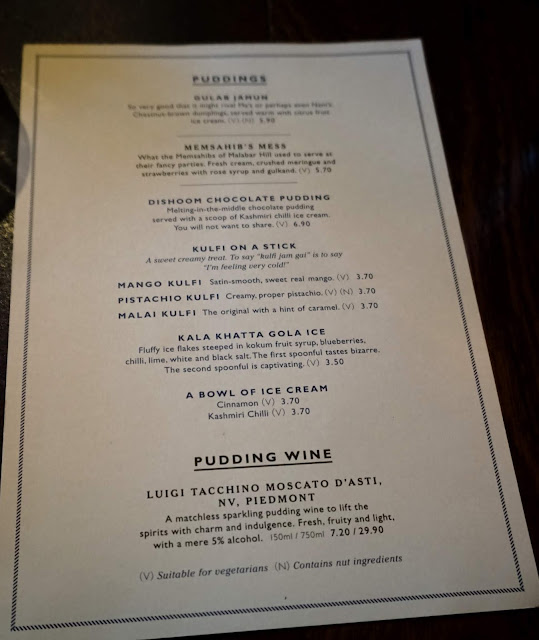