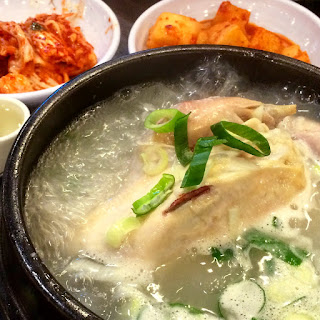 Koryo Samgyetang (고려삼계탕) is a solid choice for samgyetang near Gwanghwamun and Gyeongbokgung, which makes it a great place to eat after touring the palace(s).

In Korea, it's common or tradition to eat samgyetang (or chicken) on three days of the year. These days are called 삼복 (sambok) - the three days are chobok (초복 - first of the days), jungbok (중복 - middle of the days), malbok (말복 - last of the days). I guess the equivalent of these days may be "dog days of summer", but I always think the English that means multiple consecutive days or weeks - like maybe all of August.

I decided to post today about Goryo Samgyetang because chobok is this Friday! So, read all my samgyetang posts to plan which samgyetang you will try in 2019.

If that's not your thing, most fried chicken shops run specials for that day. 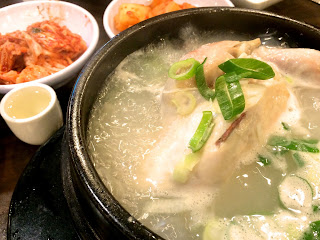 I have been to Koryo many many times over the years. The food taste and quality is always pretty consistent. Samgyetang is one of those classic "traditional" Korean foods.

Its actually pretty easy to make, so you could always consider making it at home. Samgyetang basically consists of a full small chicken (I usually use a Cornish game hen when I make it at home) stuffed with sticky rice, Korean dates/jujubes, garlic, and ginseng roots.

The broth is a cloudy/clear chicken broth. I usually add some of the rock salt on the table to enhance the broth flavor. I kind of like this because you can control the amount of salt in the broth, so there's no one to blame but yourself if you find the soup to be too salty.

As you can see in the picture, as with the other samgyetang restaurants, you are given a small shot of  ginseng liquor. It's part of the experience, so you should try it the first time (you may choose to take it or leave it after the first time). You are also given two types of kimchi - the typical radish kimchi and the typical cabbage kimchi.

Koryo Samgyetang has other varieties of samgyetang, too. Some include samgyetang topped with abalone.

The price is not exactly cheap, but it's a very hearty meal, so I usually have it as my only meal for the day, so if you calculate it that way, it ends up not being too bad.