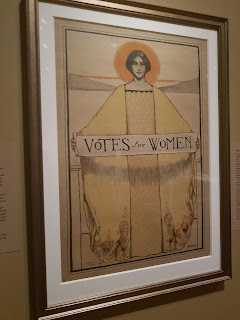 At the end of March 2019, the National Portrait Gallery in Washington, DC opened its "Votes for Women: A Portrait of Persistence."


This exhibition will run until January 5, 2020. The National Portrait Gallery is part of the Smithsonian and is located, with the Smithsonian American Art Museum between F & G Streets NW and 7th & 9th St. NW in Penn Quarter. It is open 11:30-7 every day of the year except December 25th. 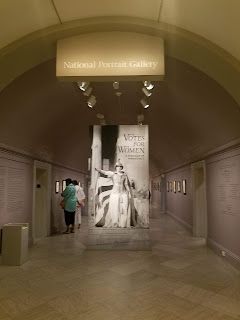 "Votes for Women" looks at the movement for women's suffrage from the 1830s to the present. The exhibition features portraits of various suffragists, as well as images of their activism, written materials, and even a set of dishes with "Votes for Women" written on them. The exhibition is split into seven sections, six of which are chronological. Throughout the exhibition, the curators have pointed out the racism of many of the white women involved in the suffrage movement and how women of color could not simply advocate for the right to vote, but often for citizenship rights more generally. 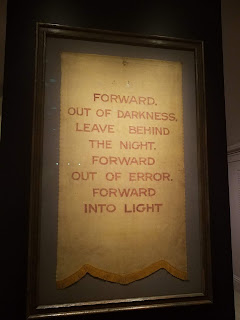 This is one of the banner's used by women's as they marched for suffrage in the 1910s. It reads, "Forward, out of darkness, leave behind the night. Forward out of error, forward into light", which references a popular hymn of the time.

This is a 1911 lithograph by Bertha Margaret Boyé. Boyé created this image for the 1911 San Francisco College Equal Suffrage League contest to support women's suffrage. According to the information for the image, it "reflects the er's burgeoning California Arts and Crafts style," I quite liked it. 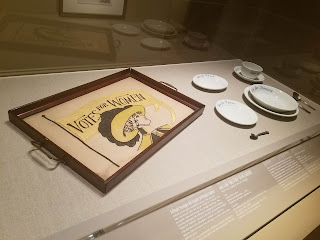 This is the dish set I mentioned above. The embroidered tea tray is from around 1915 and features two symbols of suffragists: the color gold and the "Merry Widow" hat.