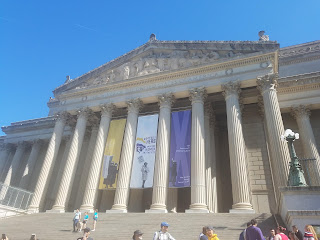 One of the biggest tourist destinations in Washington, DC is the National Archives Museum.

Located between Pennsylvania Avenue and the National Mall, the museum is easily accessible by bus or Metro. The general visitor entrance is on Constitution Avenue on the 9th St. side of the building. The museum is a hot spot for school groups, so plan to wait in line to pass through security, or arrive early enough to be near the front of the line. The exhibitions are open every day of the year, except Thanksgiving Day and December 25, from 10-5:30--the last admission is 5pm. One of the big downsides to this museum is that you can't take any pictures or video inside.

The ground level features an exhibition with an original 1297 Magna Carta and how debates around rights and freedoms have changed over time.

The upper level has more galleries, including a learning center and three interactive or rotating exhibits. The centerpiece of the museum is the "Rotunda for the Charters of Freedom." The Rotunda has original copies of the Declaration of Independence, the Constitution, and the Bill of Rights. There are other artifacts and explanations along with the central three documents. There is a second line to enter the rotunda, but there is no time limit once you are in the room. It is cool to see these documents, but the experience depends on how many other people are around, as the space by them can get crowded.

Currently, the Lawrence F. O'Brien Gallery on the upper level is housing "Rightfully Hers: American Women and the Vote." This exhibition will be up until January 3, 2021. This exhibition focuses on the ratification of the 19th Amendment to the U.S. Constitution which granted women the right to vote in 1920. The day I, Marissa, visited was the 100th anniversary of the amendment being passed by Congress, which was serendipitous. The exhibition itself was interesting and spent time discussing the complexities of the American women's suffrage movement. Throughout the exhibit, specific women activists are highlighted, including many women of color. The end of the exhibition focuses on how the right to vote has continued to be contested into the 21st Century.

Overall, the National Archives Museum is an interesting stop, but one that you don't need a lot of time for. Including waiting in line, I spent about 90 minutes on this visit. Granted, I skipped some of the exhibits and didn't read a lot of the plaques. Whether you add this museum to your DC itinerary depends on your interest in American history.