[Philadelphia] High Street on Market - Delicious Sandwiches and a Ton of Pastries! 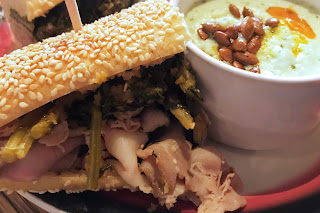 High Street on Market is a great brunch restaurant with plenty of vegan, vegetarian, gluten-free, and meat eater options. Definitely recommend since there's something for everyone!

High Street on Market has wonderfully fresh food made with fresh and local ingredients.

The baked goods are the stars of the show, to be completely honest. 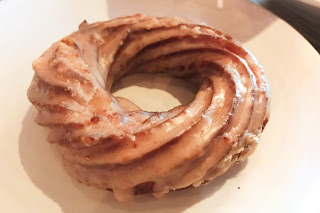 So, they gave us a cherry doughnut to start. I was a little "eh" when I heard it was a cherry doughnut, but I should have realized before eating that it was going to be made with fresh cherries, not like gross jellied cherries.

I personally prefer yeast doughnuts, but this was quite fresh and fluffy even though it wasn't a yeast doughnut. The glaze wasn't too, too sugary, which I also was happy to find out. 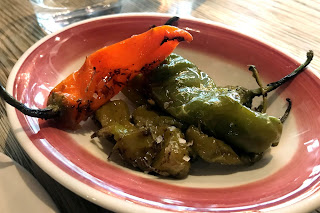 This is another pre-meal food given to us at High Street on Market. These peppers were so yummy! They were fresh and pretty flavorful! If you get them and you're a little iffy about trying them because you're worried they'll be spicy, don't be! These peppers basically tasted like bell peppers. 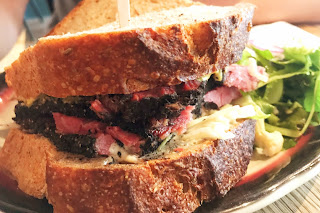 This is the Pastrami on Rye sandwich. I know, I know, we came from New York City and decided to get a pastrami sandwich, but this was so worth it.

The pastrami was really tender and flavorful, not too salty. TBH, the boyfriend had just had a particularly famous NYC pastrami sandwich a few days before (K***) and said that this one was so much better because the ingredients tasted fresher. He said the pastrami almost melted in his mouth with every bite.

The bread was so good! It was so fresh, so it was nice and fluffy, but wasn't too soft because it was able to hold up to all the fillings inside the sandwich without breaking apart like crazy. 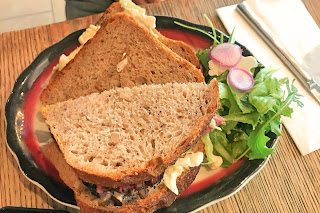 Here, you can kind of see the side salad. It was pretty puny, but the salad components were quite fresh. It was a nice fresh bite to complement the kind of heavy, very full, sandwich full of meat, 2 types of sauces, and some cabbage slaw. 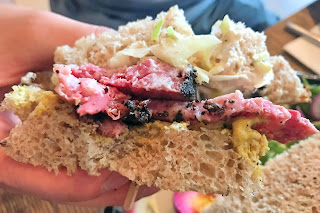 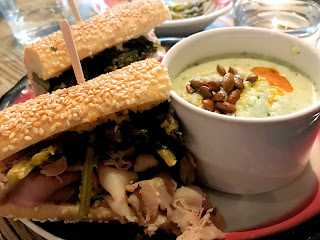 This is the Roast Pork sandwich. I added the Cucumber Mint Gazpacho because I thought it sounded refreshing.

Again, this bread was amazing! Definitely recommend getting any sandwich on this bread, but I really love anything with sesame seeds, so I was super duper excited when I saw how many sesame seeds were on this bread.

I was a little iffy because of the pickles and the pork, to be honest. But, since it was Philadelphia, I figured this was my chance to try a Roast Pork sandwich in Philly. 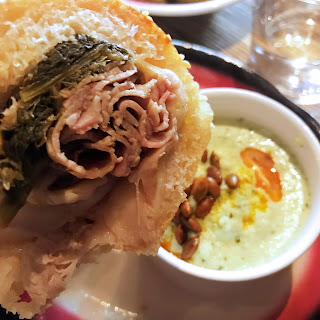 It was a pretty salty sandwich, if I'm being completely honest, so I was so happy that I added the Cucumber Mint Gazpacho. It was the perfect pairing! However, compared to roast pork sandwiches at other places, it wasn't salty. The pork was super thinly sliced and was quite juicy. 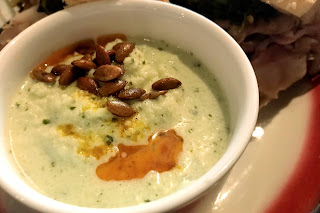 This soup was super cool and flavorful. The flavors were on point! I don't know why ,but sometimes when I've had gazpacho, it's been oddly super salty. This one was NOT too salty! It had the perfect balance of sweetness, saltiness, acid, and fat. The addition of the seeds on the top was the best idea because it added a nice crunchy texture to the creamy gazpacho texture. 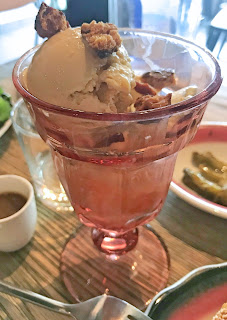 I would say, this is the only thing we ordered that I really wouldn't recommend fully. It was good, but it was EIGHT DOLLARS!

The best part was definitely the pretzels. So, I think if you see pretzels on the menu, you should totally go for it. They were crunchy, but buttery on the inside. 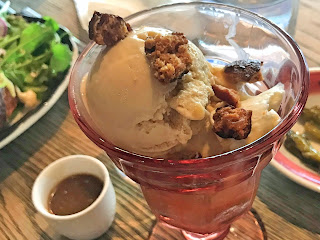 As we were leaving, suddenly one of the workers ran out to the street after us with a nondescript bag. I assumed she thought we were the table that left at the same time as us and that maybe they forgot their leftovers or something, but my assumptions were wrong.

Inside the bag were some pastries - we got another doughnut, a chocolate babka, and a croissant. Not sure why we were so lucky to get these pastries, but I was so happy that we were gifted these pastries. 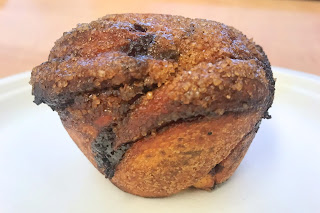 The chocolate babka was super good. I am personally not a huge fan of chocolate pastries, so I wasn't the best judge, but I'm sure that if you like them, you'd be in heaven.

I really liked the sugar crystals on the outside. It was nice and crunchy. If you haven't realized it by now, but I'm a crunchy food lover.

This was a really dense pastry. 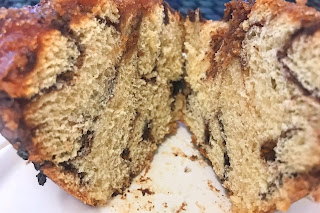 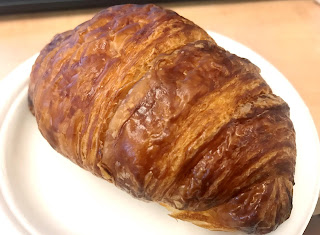 Even though I said I really like crunchy foods, my guilty pastry pleasure is actually croissants. The fluffier and flakier, the croissant is, the better.

This croissant was so buttery and fluffy. Look at the inside! This was even the next day and it was still quite fluffy and moist. 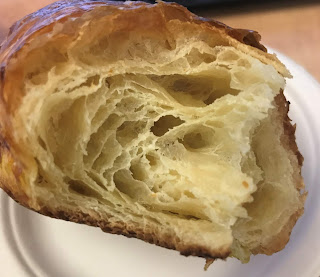 I hope I have proven my point that the baked goods are definitely 10000% worth the visit to High Street on Market the next time you're in Philadelphia.

The coffee smelled pretty darn good, but since we had a train to catch and I have a personal rule about not using the restroom on a train, I couldn't try it.

There was also a wide variety of beverages to choose from - I really wish I could have tried some of the cocktails, even the "zero proof cocktails", and the shrubs. I love shrubs., which reminds me, I am still making my own drinking vinegar (recipe here). Definitely recommend making your own it'll save you a lot of time and you can control the amount of sugar. 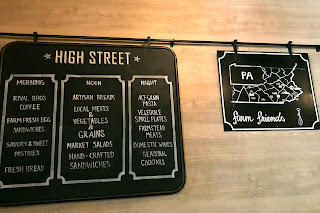 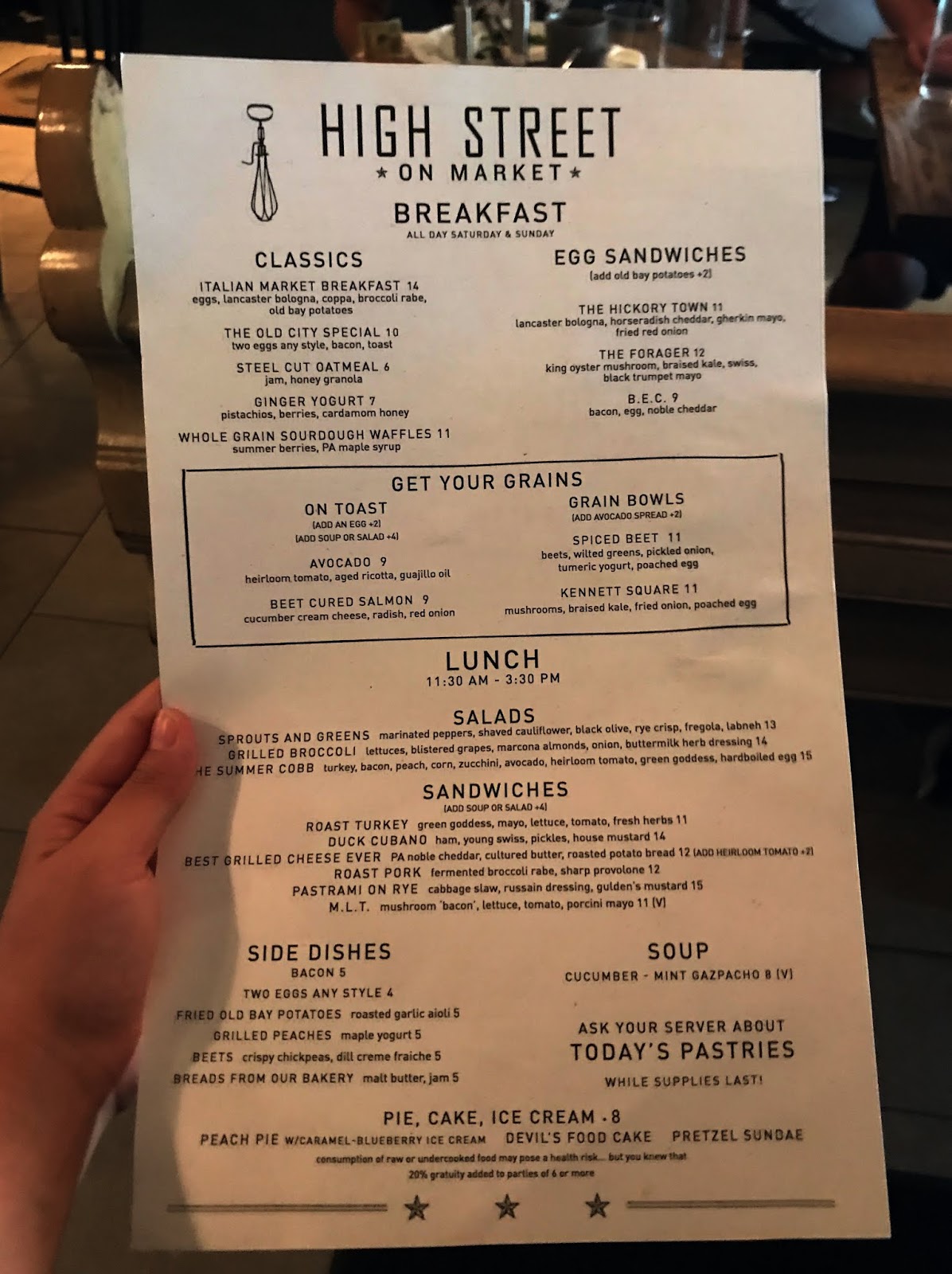 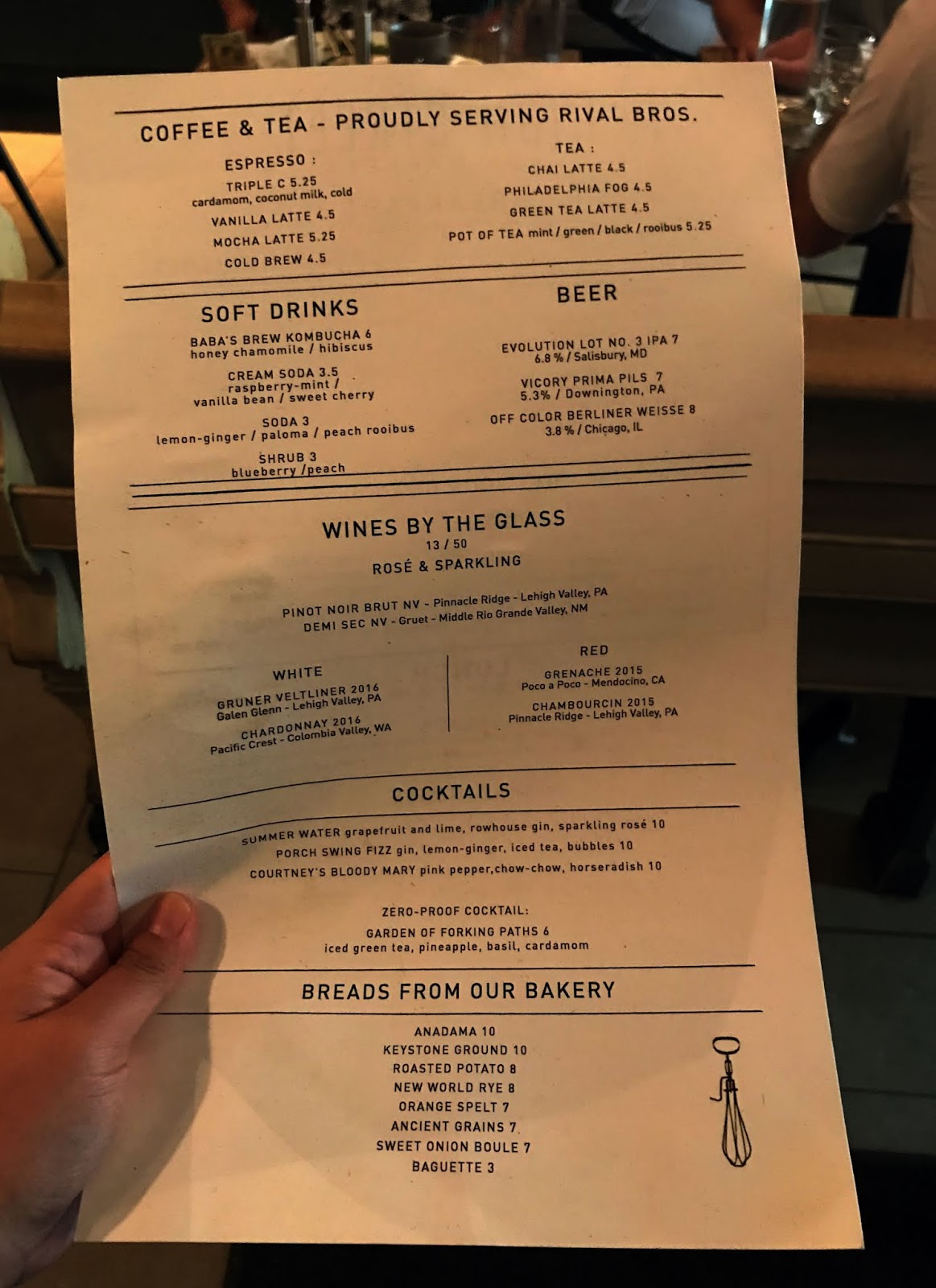