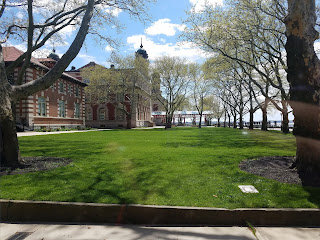 Many people who go to New York City visit the Statue of Liberty and Ellis Island.

However, on a recent visit, I went on a hard hat tour of Ellis Island in addition to seeing the parts of the islands that are National Parks.

The hard hat tours are run by the Save Ellis Island organization which is dedicated to restoration and conservation of 29 buildings on the south part of the island. These buildings are part of the hospital system and are, technically, part of New Jersey and not part of the National Park. The hard hat tour is roughly 90 minutes and departs from the main hall on Ellis Island. The tour makes its way from the main hall to the corridor to the hospital, past the old ferry departure building. Most of the tour takes place in the infectious diseases wards rather than the general hospital. The general hospital is in worse condition than the other buildings--including lead paint, asbestos, and decaying staircases.

The tickets are available online in advance, which I recommend so you can plan your day accordingly, and include the ferry to Ellis Island (and Liberty Island). Tickets are $58.50 in advance and $45 if you purchase them on Ellis Island. The ticket prices are totally worth it and provide the main source of revenue for Save Ellis Island.

The timing on the tickets is a little confusing: you are given a tour start time and a security check-in time. The security check-in time is 90 minutes before your tour. You can arrive earlier, which I suggest just in case. You have to go through a metal detector and your bags are X-rayed before you board the ferry, so don't bring large items. The ferry stops at Liberty Island first. If you have time you can walk around the Statue of Liberty and see some of the exhibitions. I just walked around and then returned to the ferry. It is a short ride between the islands, but you don't want to be late to Ellis Island and miss the start of your tour. If the ferries get behind schedule they might start the tour a little late, but it's better to be early. As I mentioned, the tour starts from the lobby of the main building on Ellis Island. Save Ellis Island's desk is a little hard to find if you don't know what to look for. As you enter the building, their desk is on the far left, close to the gift shop.

They do four tours a day January-February; five tours a day March, April, most of October, November, and December; and six tours a day May through September. I would suggest going to one of the tours in the late morning or early afternoon so you can stop at Liberty Island if you haven't been. However, my tour guide mentioned that the last tour of the day in December, the 2:30-4pm tour, is the spookiest because it gets dark so early.

After your hard hat tour, you can look around the rest of Ellis Island, including a few exhibitions, which are very well done, and the registration room, which is amazing and has Park Rangers who offer interpretation of the building. There is also a dining hall where you can buy food, some of which is based on actual meals served, and eat in the same room as the new immigrants ate.

During the tour, they encourage you to take pictures the entire time, which is really awesome.

One last note of warning, the tour takes place rain or shine and is inside and outside, so be prepared. You have to wear closed-toed shoes and you have to be able to walk and stand the entire time. It was very windy when I went, so I was glad I brought a jacket and wore boots. In the case of truly inclement weather, they will cancel tours.

Having gone once, I would definitely go again! 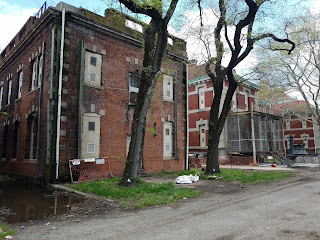 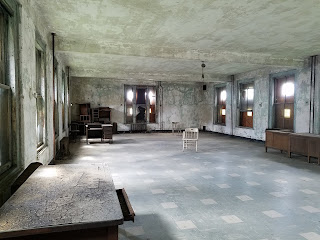