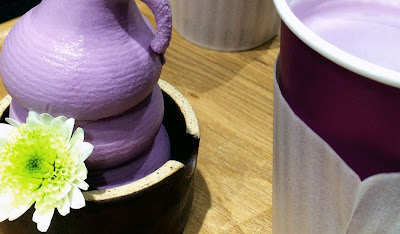 Decided to revisit Cafe Bora on a trip back to Seoul.


Cafe Bora originated in Seoul, but there are now global locations, including one that you may have seen on Buzzfeed a while ago.

To my knowledge, this was one of the first places you can get trendy purple sweet potato treats in Seoul. My first visit was back in 2015 or 2016 in the location south of the river (not sure if it's still there), but the location that you'll likely be able to visit easily during a trip to Seoul is in Samcheongdong because of its proximity to Gwanghwamun, Gyeongbok Palace, City Hall, Samcheongdong/Insadong. 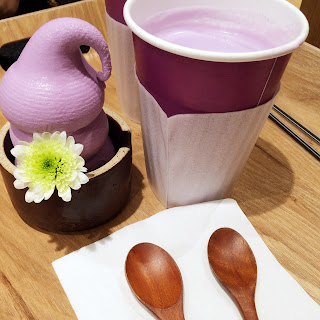 This is a really thick, but dreamy latte. Just, don't go there on a relatively full stomach because they do make the latte from scratch (most other cafes make it from powder).

I'm not exactly sure how to describe the texture. It's thicker than a coffee latte would be, but definitely more liquid than a porridge would be.

It is pretty sweet, but they don't add sweeteners (according to the cashier). I would definitely recommend splitting one with a friend if you go/are okay sharing a beverage.

We also got the Sweet Potato Ice Cream. This is so good! I think I actually prefer it to the ube flavor at Soft Swerve here in NYC (post here). It's not as creamy/milky flavored and not as sweet. I think it's a more mellow sweet potato variety.

I do like that they use organic ingredients and everything is made in-house. 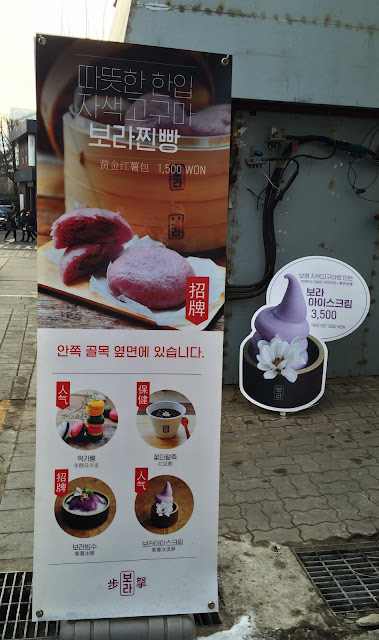 I have yet to try some of the other deliciousness, including the Bora Jjinbbang (Purple Steamed Bread) and the Kkot Dan Pat Jook (Flower red bean porridge). I think those two would be better in the dead of winter, but maybe that's just me.

Have you tried Cafe Bora yet? What did you think of it?