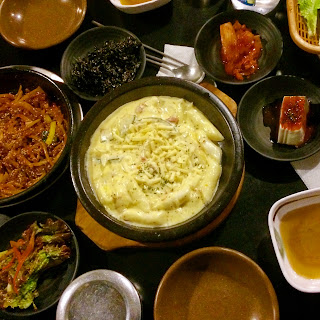 Samcheonghwa is one of my favorite places to eat in the touristy Insadong/Jongro area.


We did go with a "trendy fusion dish", the Carbonara Ddukbokki (rice cakes), but we didn't regret it. In fact, each time I go back and get that same dish, it's that good.

EDIT:
It used to be located in Samcheongdong (where I did this review), but they've since expanded to two stores. One in Jongro and one in Daehakro (no longer a Samcheongdong location).

I've never been given an English menu, so I'll translate here:

EDIT: Disclaimer, it appears the restaurant expanded the menu since I last visited, so there are plenty of new menu items, too. I can translate a menu here if you want...just leave a comment. There are some items that are available only at the Jongro location and some that are only at the Daehakro location.

Right page:
Top section:
Bulgogi jeongol (bulgogi casserole) - 22,000 KRW (2 person set)
Ddukbaegi bulgogi (bulgogi served in a hot pot, usually with sweet potato noodles and some broth) - 8,000KRW (I sometimes get this when I see it on the menu)
Bulgogi baekban (same as the options on the left page, not sure why it's on there twice) 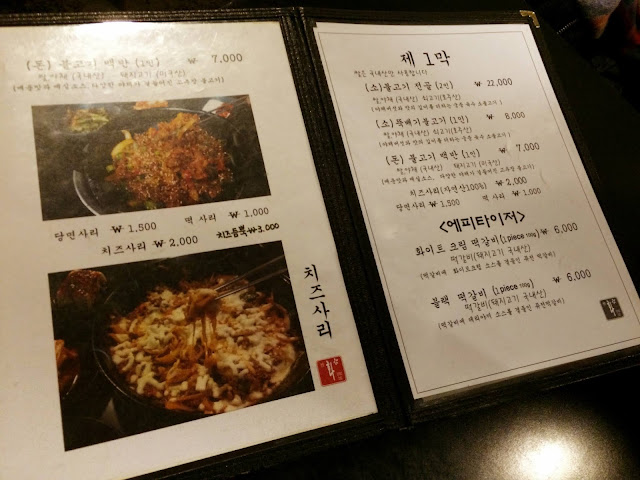 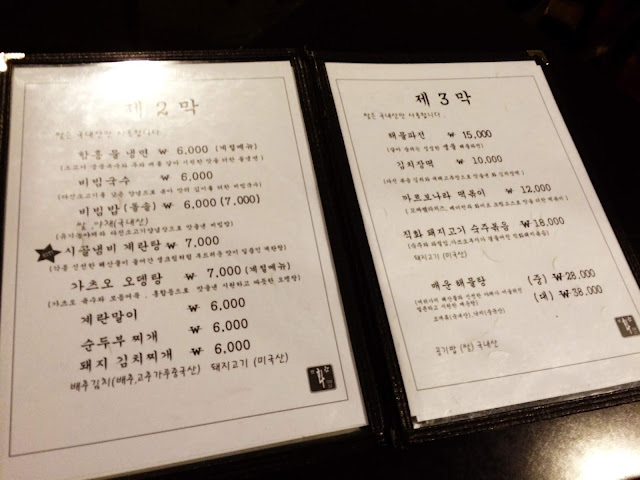 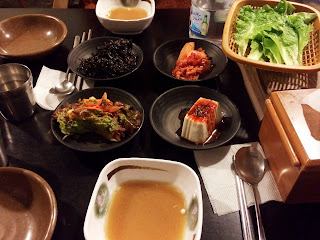 These were the side dishes we were provided: the fried laver strings (I don't know what they're called in English), kimchi, salad, and soft tofu.

If you order the bulgogi like we did, you'll also be brought a basket of lettuce and give the oil for dipping the meat.

The mains: Sorry the restaurant was pretty dark. 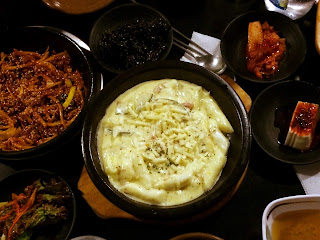 It was two of us and this was more than enough food. The left side is the bulgogi baekban (without cheese topping). We ordered a two-person amount because it's kind of weird to order separately in Korea. I'm not sure if it would have been a problem at this restaurant, but most require at least 2 person quantities to be ordered, even if the price is listed per person.

This bulgogi was pretty good. It's not the sweet kind of bulgogi that is served most often abroad. 1) it's pork based (I think most Americans expect bulgogi to always be the sweet marinated beef, but it's not), 2) It had vegetables in it, too, and 3) it's a little spicy, but not too much so. 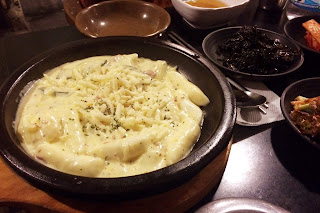 This menu item was one of our favorites. I go back and get this item on each visit. The Carbonara Ddukbokki here isn't too creamy/runny like you may find at other restaurants. It's the perfect balance of cream. The dduk is also firm, but yet not too firm.

I would recommend checking it out if you've never tried a fusion ddukbokki before. Don't let the other restaurants' attempts turn you off.


EDIT:
Locations
Daehakro - At Hyehwa Station (line 4), take exit 2 and walk straight to the first street. Turn left. Go straight past the GS25. At the corner by the Homestead Coffee, turn left. It'll be on your right. It's next to the Daehakro location of Uncles.

Insadong - From Jongro-3-Ga station (Line 3,5), take exit 5. Walk straight to the big intersection and walk straight. At the Club Clio store, turn left. The restaurant is on the second floor of the building next to the Nature Republic with the Korean writing out front.

Basically, if you're going to the Insadong location, it's right on the main street. The best landmark is probably the Nature Republic with Korean writing. It's across the street from the Lina's.