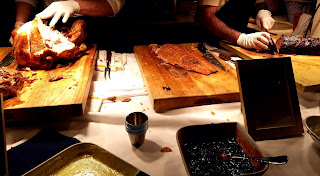 We went to Teddy and the Bully Bar for Thanksgiving dinner 2018.

A bit late, but not too late. In fact, maybe I'm a little early for next year, right?

Review up top. Just a disclaimer that these are our personal opinions. The reviews differ, so you should read bot hand make your own decision.

Meredith's Thoughts:
I would say that, I, personally, would NOT recommend this buffet based on my personal experience at the dinner. I think that if the restaurant is not a buffet restaurant, they should definitely not try to do a buffet. The buffet items were all super cold and stale. The workers kept changing out the trays, but then dripped the gross water from under the trays into all of the dishes.

The meat was fine, but variable quality - some pieces were SUPER DUPER dry, some were all fat, some were cold, and some were lukewarm. The starters were pretty okay, but that's because they weren't made in bulk. If the starters are any indication of the food in the restaurant usually, I would recommend!

The desserts were the absolute worst! There was no flavor and they were dry. The pumpkin pie had literally no flavoring in it - no sugar, no cloves, no cinnamon, no nothing. The eggnog creme brulee was...meh. The brulee part was well-executed again, but I could not taste any hint of eggnog.  The only thing good about the dessert was the ice cream.

I'm sure the restaurant is delicious on any other given night, but not for buffet.

Marissa's Thoughts:
The highlight of the Thanksgiving buffet was a choice of three great meats...turkey, salmon or prime rib. I'm not a big fan of prime rib but I filled my plate several times with turkey and salmon. The prime rib was good, as long as you didn't get an end piece like I did. The turkey was among the best I've had...either home-cooked or in a restaurant. The white meat was perfectly juicy and tender. The dark meat fell off the bone. The salmon was cooked evenly and it was easy to cut off bit-size pieces with a fork.

The buffet table hosted a generous selection of sides. I enjoyed the green beans, mashed potatoes and mac and cheese. Other sides included roast vegetables, which were good, caramelized yams, which were one of my favorites, and whipped potatoes, that were good and had a smooth texture and flavor.


The desserts were alright, but a little basic. The pumpkin pie crisp with bourbon ice cream was good, but was more like pie with granola. The ice cream was delicious--I wish there had been more of it to combine with the granola and pie. 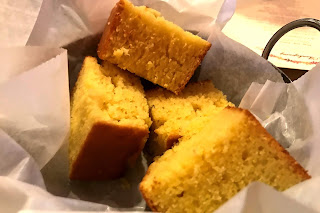 This is the starting bread. It was cornbread. I would say it was pretty dry and crumbly, so I had about a half of a piece and realized I was done. 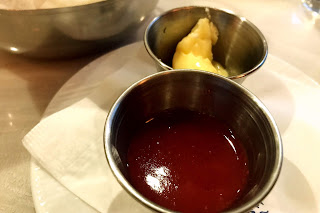 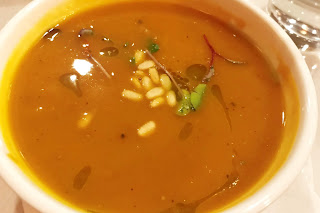 This is the Apple Butternut Squash Bisque. 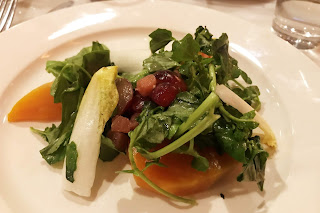 This is the Cider Glazed Beet Salad. 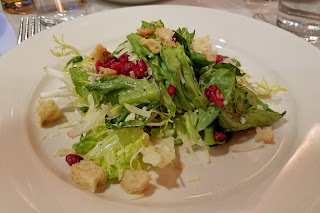 This is the Caesar Salad. 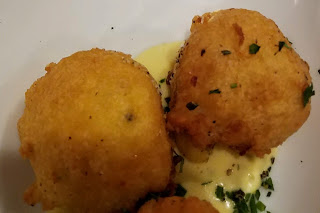 This is the Lobster Beignet. 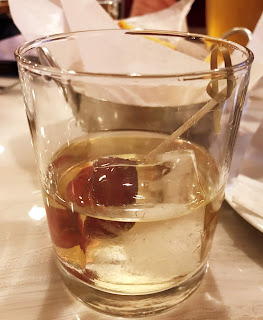 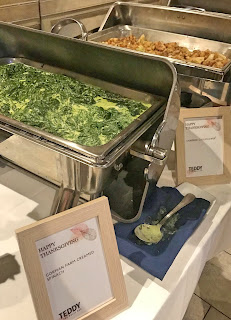 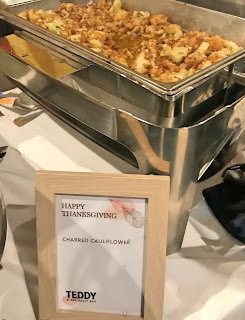 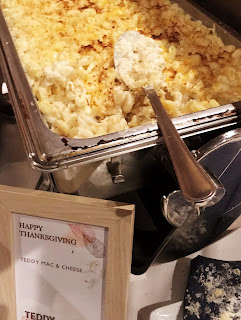 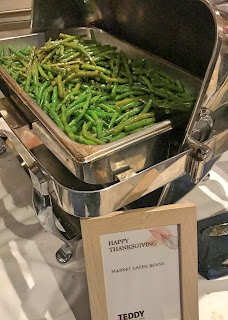 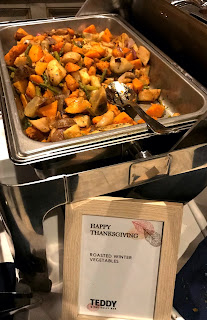 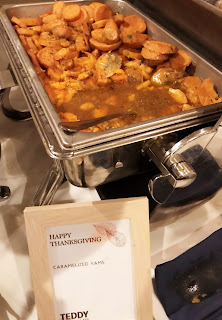 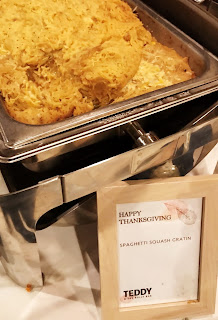 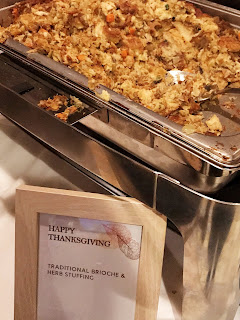 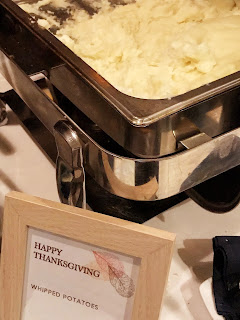 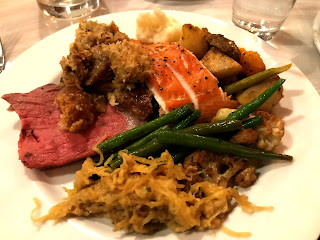 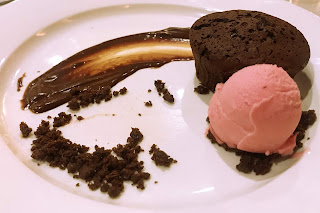 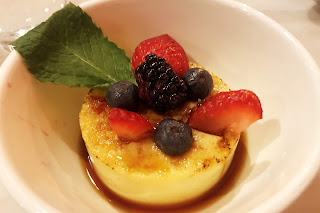 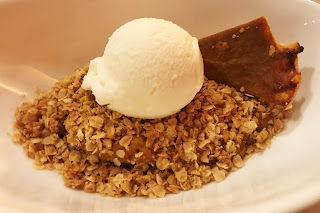 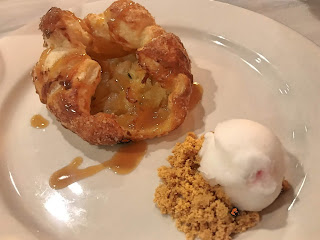 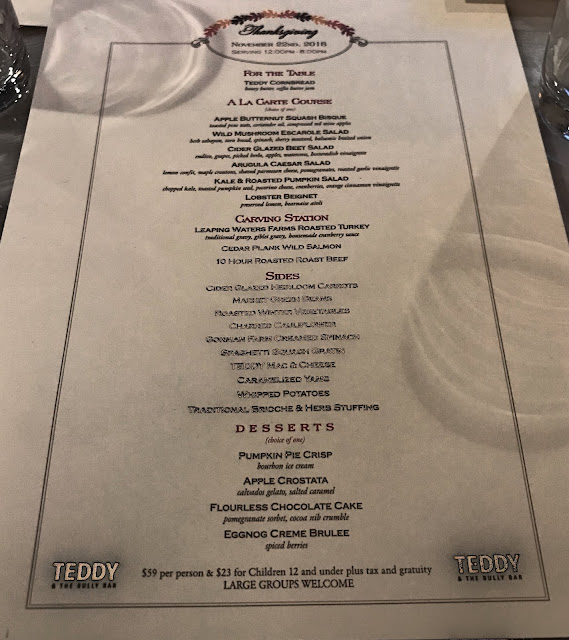 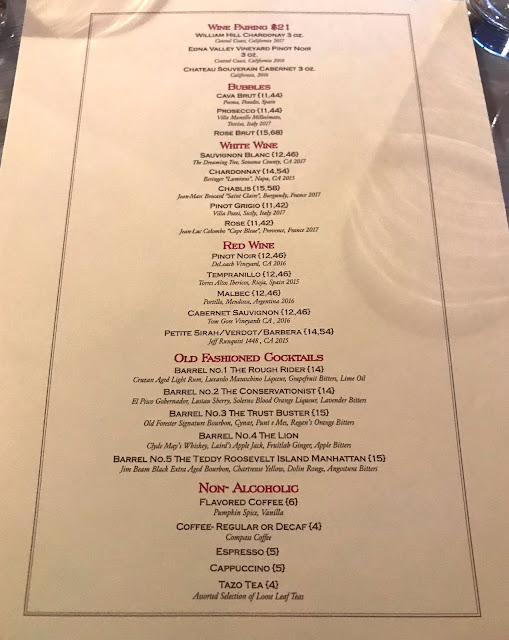