I recently checked out Zen 6, which is now under new ownership, after Nick invited me to visit.

Nick bought Zen 6 about one month ago, so if you check it out on Yelp or Google (or whatever your go-to review site is), make sure you sort by "most recent" reviews since the only thing that stays somewhat the same between the new owner and the previous owner is that it still offers ramen.

We had a sampling of many of the options on the current menu, but the menu will be in flux since it is so new. 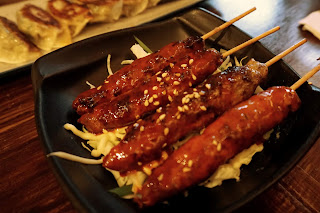 These are the cumin sausage skewers ($12). This was my group's favorite dish of the night. The flavors were so great and the sausage was still quite juicy on the inside. It's a very flavorful sausage made with a mix of ground pork and beef. The sauce was really good, too. It was slightly salty, slightly sweet, and slightly spicy at the same time.

I could imagine this being great with beer. 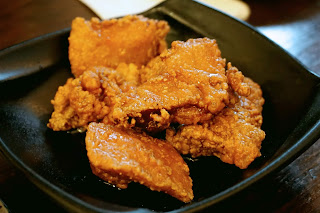 This is the fermented garlic honey karaage ($6), which was also a crowd favorite. It was crunchy on the outside and still tender on the inside. We also all appreciated that the chicken pieces were not overly sauced, so it wasn't messy to eat.

This flavor was great, too. The fermented garlic had a nice deep savory flavor, but the honey added a sweet element.

It's served with mayonnaise. Sorry it's out of frame. You can imagine what it looks like. I personally don't like mayonnaise, so I kind of ignored it when I saw it was mayo. 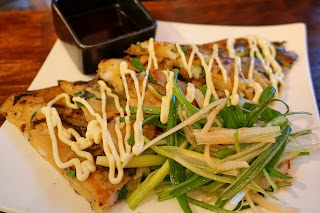 This is the pajeon ($7). I think some of my dining companions had never had a pajeon before, so they all thought this was super great. I'm personally a little picky with my pajeon (Korean pancake made with green onions). That being said, it's probably the best pajeon I've had in New York City. The pajeon was decently thick and I also liked that it was served with green onions and chives on the side - I like my pajeon on the onion-y side (also, love me some buchujeon). [Tangent - thinking right now about buchu (Korean chives) made me think of that bread I had a Gungjeon Bakery in Gwangju.]

I was also a little thrown off by the mayonnaise, personally (see above; also, I've never had pajeon with mayonnaise even in all of my rainy days living in Korea). However, my dining companions took the pieces with the most mayonnaise, so I could just taste the pajeon as pajeon.

I would also like to say, pajeon can be vegetarian if you choose to keep it original without seafood. 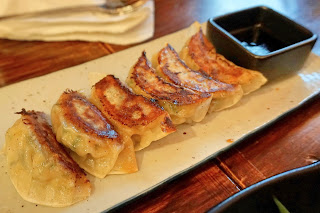 These gyoza ($6) are out here for you dumpling lovers. They were quite flavorful. We tried the pork gyoza, but there are vegetable gyoza (vegetarian) also available.

We did like how they were lightly fried and not super greasy. 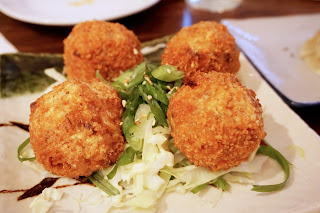 This is the jumok bap ($6), a fried rice ball filled with pork, kimchi, and cheese. Honestly, this was probably my least favorite small plates of the night, but that's really just my personal opinion because I really like OG jumok bap for its simplicity.

I can see that this would be a good fusion option for people who are a little on the fence about going to a ramen place. Like, for example, my dad would even like it. 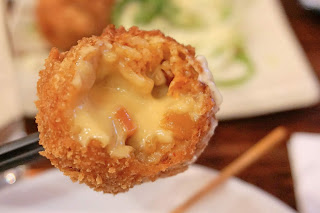 The filling is quite light on the kimchi and pork, just for people who are a little less than enthusiastic about kimchi.

If you go in knowing this, I'm sure you'll love it. It's kind of like how I wish every fried mac and cheese ball I've ever tried actually was. Crispy on the outside and filled with molten cheese. 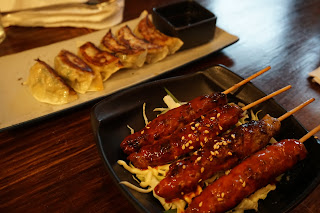 Verdict: The small plates are great for sharing. We were mainly meat eaters, so we were huge fans of the sausage and the karaage (fried chicken), but there are options for everyone (including vegetarians and people who don't like Asian food).

The mains:
(Sorry, it was actually kind of hard to take pictures of some of the mains because of the red bowls.) 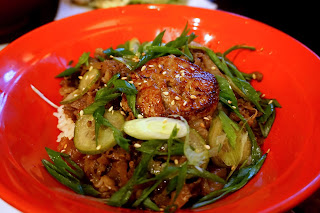 This is the foie gras gyudon ($13 gyudon, $9 foie gras). I love all things gyudon. It's one of my favorite go-to homestyle Japanese dishes - basically, it's easy to order in Japanese, so even someone who doesn't know Japanese like me can order it.

This one was fancy, though. It had a slice of foie gras on the top. I would like to say this added something unexpected to the gyudon. The foie gras added a savory flavor to the gyudon. I, personally, did think that there was a bit too much sauce on our bowl, but my friends shared the other bowl and said that theirs had less sauce. I did appreciate all of the vegetables on top because that's one of my favorite parts of gyudon, to be honest.

My boyfriend 100% loved this dish and thought it was a winner of the night. He said it tasted like his mom's cooking, so it made him nostalgic. He would like me to also inform you that he says it "brought tears to my eyes." 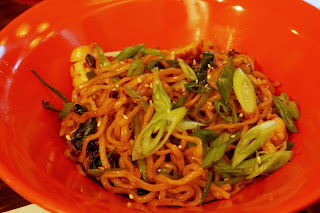 This is the seafood yakisoba ($12).  This was quite good, a bit salty, but we liked the seafood aspect and also the nice spicy flavor (not like super deathly spicy, but I could taste that there was a bit of spice in it).

My favorite thing about the yakisoba, other than the slight spice, was the noodle texture. Personally, I love it when noodles are still slightly chewy, not crunchy and not too soft. This was the exact texture of the noodle. 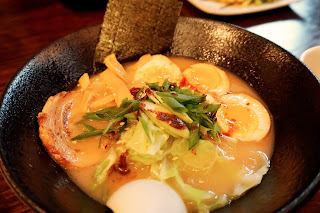 This is the ramen. It was pretty good and filling. Again, I really liked the noodle texture. It's also still somewhat chewy texture. I also really love menma (bamboo shoots) on my ramen, so I liekd that the ramen at Zen 6 came with so many of them without them being added as extras. I may have eaten all of the bamboo shoots.

The broth was quite nice and flavorful, a little salty, but not too salty. We had asked for some pepper (were given white pepper and the red Japanese pepper seasoning), but ended up not needing to add much of it because the broth was so flavorful.

This is the menu as it was on 12/16/2018, but, Nick mentioned that they will be tinkering with the menu since it's so new. So, don't be surprised if you see some changes.
Also, check out the fancy add-on ingredients you could add. 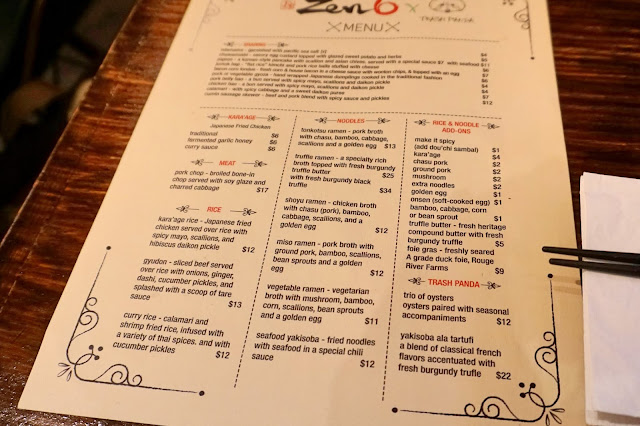 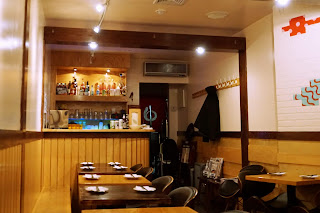 This is the interior. It's a pretty small shop, but that's okay by me. It won't get to crazy loud.

If you look in the picture, you'll see that the wall on the left hand side behind the benches is empty. The reason for this is because Nick and his wife want to highlight local artists and kind of make it into a gallery ramen shop, which is such a nice idea! He said that eventually the bios of the featured artists will be added to the back of the menu. If you would like to be featured, feel free to DM them at on Instagram. I linked their bio here. 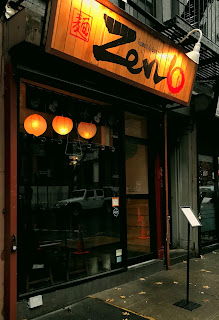