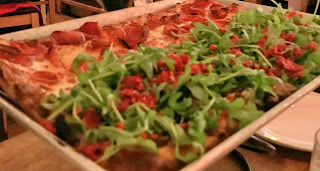 Adrienne's Pizzabar is quite popular with the after work crowd for its (relatively) cheap beer and delicious, high-quality pizzas.


I knew I had to check it out. Bonus, it's on Stone Street, which is always fun to visit because of the literal stone street.

We went in without a reservation at like 8PM on a Wednesday night. So, maybe we were lucky, but we got in right away and got the last available table. There is also delivery available if you're in the area.

The location is pretty great if you're traveling and visiting the 9/11 memorial and want to eat somewhere local (ie. not a chain). It does not have a kid's menu per say, but there were children in the restaurant when we went, so don't worry about whether kids are okay or not. Just note that most of the tables were high tops (I can't remember if some by the door were lower tables or not, sorry.)

It really is a locally owned pizza spot built in cooperation. From the Adrienne's Pizzabar website, which quoted the Wall Street Journal, Harry and Peter Poulakakos, the team behind other neighborhood favorites like Financier Patisserie and Ulysses, along with Nick Angelis, owner of the popular Forest Hills pizza spot, got together to start Adrienne's when there was still a dearth of casual restaurants in the area."

Also, side note, Financier Patisserie is great and nearby, so add that to your itinerary. 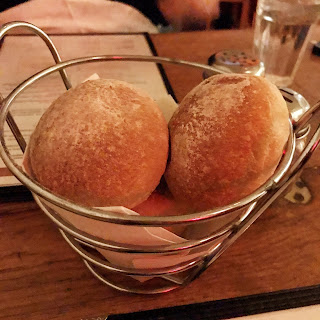 So, you start the meal with some bread rolls. Tangentially, I kind of wanted to start a series in which I write about the free starters (like bread, bar snacks, etc.) at restaurants. Let me know if that sounds fun.

These breads were fresh, crusty on the outside, but soft on the inside. Not too crusty, not like it'll cut your mouth when you eat it. They were also still warm when they arrived at the table. I ate half because I wanted to make sure I had room for pizza (definitely the way to go). 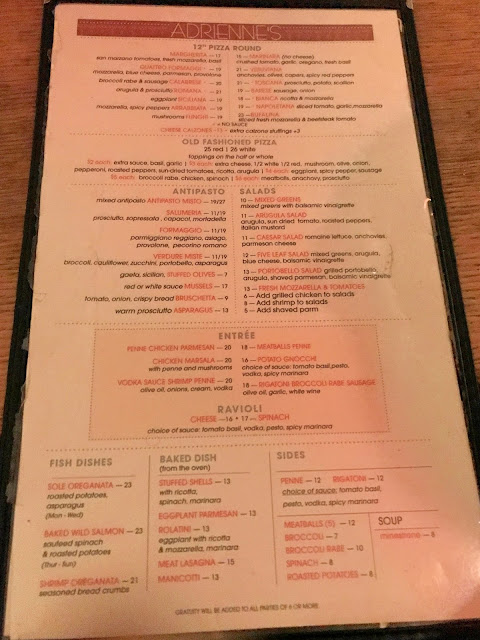 This is the menu. I went in knowing that I wanted to try the Old-Fashioned Pizza, which is kind of the claim to fame.

There are also round pizzas, other entrees (like a delicious-looking penne chicken Parmesan), raviolis made in house, eggplant parmesan, soups, salads, and fish dishes.

So, basically, there is something for everyone.

Also, hint! The professional reviewers mention the arugula salad, so maybe I should have gotten that one. 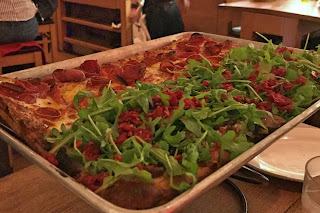 We got the Old Fashioned Pizza with red sauce. We ended up doing half and half. Half had just pepperoni and the other half had arugula and sundried tomatoes.

All I can say is...this is some of the best pizza I have had in a while. Maybe I just really like square (or rectangle) pies. I just really like the corner pieces because I'm a crust kid. The dough is so flavorful and I like the thickness of the crust. It's not a thin crust, but it's also not a deep dish. It's a good compromise in texture for both camps. The crust still gets somewhat crispy and is still somewhat fluffy at the same time, if that makes sense.

I also really liked that they didn't have a problem with us doing half and half for the pizza toppings. I mean, I'm sure that it actually made them more money because it's not like the ingredient price was split in half for it only being on one half of the pizza.

I'm not usually a fan of pepperoni pizza, but I tried a bite. I liked that they use the small pepperonis. It kind of cut down on the grease factor and, it's probably just mental, but I kind of felt like the pepperoni flavor was somehow concentrated into the slices.

I was a HUGE fan of the sundried tomatoes and arugula half. All the ingredients were fresh and they were quite generous with the toppings. Sometimes arugula gets kind of mushy on top, but you could tell that the pizza came out to the table right after it came out of the oven.

For your reference, these are the alcohol menus. 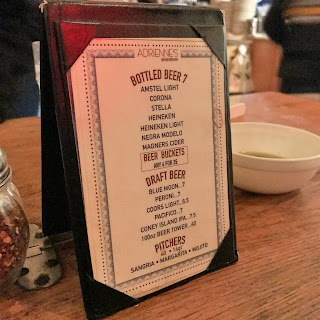 Cocktails are all $14 each. 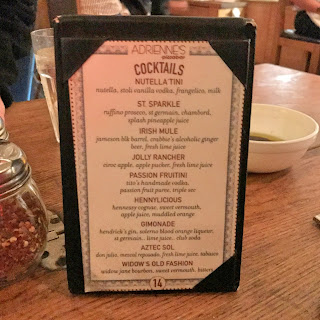