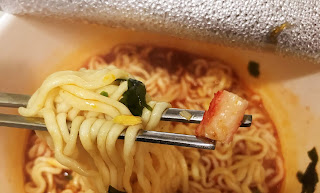 When I saw this unique flavor of cup noodles at CU, I knew I had to try it because it sounded "fancy." It's Sokcho Red Snow Crab Cup Noodle. 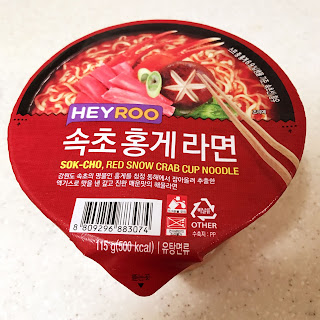 It's the CU store brand - Hey Roo. It was 1400KRW, so it's actually slightly cheaper than the other cup noodle brands like Shin Ramen (available on Amazon), which are usually about 1,500KRW. 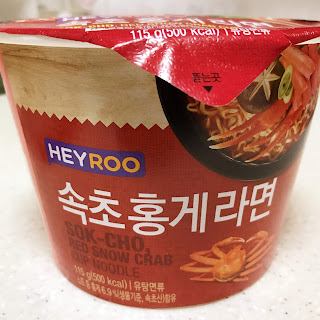 Sokcho is a city in South Korea in Gangwon-do, the same province in which the Olympics were held. Actually, I think there were some events in Sokcho, but don't quote me on that.

Sokcho is famous for red crabs, actually. This ramyun is reminiscent of a specialty dish of Sokcho. 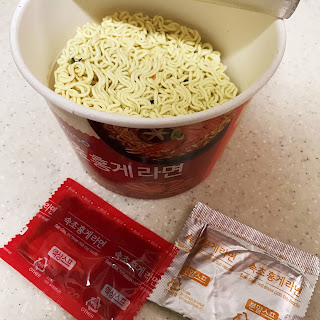 This is what it looks like when you open the package. There's a "wet" soup [red package] and a dry soup [silver foil package]. Unlike a lot of other cup noodles, the dehydrated vegetables are not in a small plastic packet. 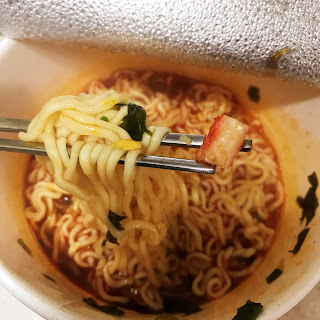 So, this is what it looks like after you make the noodles.

I kind of expected it to be really spicy given how red the soup broth looked, but it wasn't that spicy actually. It wasn't even "spicy" like Shin Ramyun is.

The flavor is actually kind of nice. It's not a one-dimensional flavor. Some of the dehydrated pieces were actually little slivers of egg, seaweed, and mushrooms. There are also some little pieces of crab, as I tried to highlight in the picture on the right.

You can kind of taste the sweet flavor of crab mixed in with the seaweed flavor, the salty flavor, and the slightly spicy flavor.

I would overall recommend testing this out during your next trip to CU.

Have you tried this before? What do you think of it?