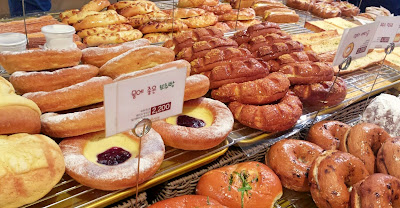 The Gungjeon Bakery (궁전제과) in Gwangju is a bread wonderland in South Jeolla Province (Jeollanam-do).

It was established in 1973, which probably makes it one of the oldest European-style bakeries in the region (if not in the whole of Korea). 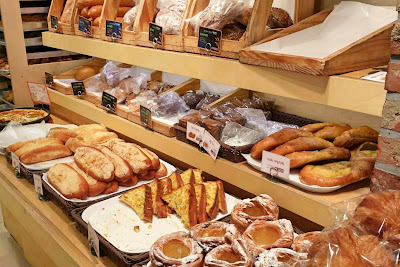 The bakery is quite famous in the region. As in, even my friends in Seoul told me to visit Gungjeon Jegwa when I went on a trip to Gwangju.

If you're from the south of Korea, I am sure you are somewhat familiar with Gwangju, especially if you are living in the Jeolla provinces.

If you're a newbie to Jeollanam or Jeollabuk (South Jeolla or North Jeolla) province, you should know that Gwangju is the largest city in the region.

It's famous for weekend trips for expats because of the nightlife, restaurants, and shopping (including foreign brands), so you'll probably end up visiting Gwangju from time to time.

If you're a Seoulite like myself, you should definitely consider visiting this historical city at least one time.

The bakery is run by a Korean master baker who was trained in France. Click on the above pictures to get a fuller idea about what's available (I was too shy to take too many pictures because it was so crowded and busy).

So, I only took closeups of what I actually bought. But, know that Gungjeon Bakery does stock/sell all of the typical bakery items in Korea (including the fusion stuff like honey garlic bread and hot dog bread), but also sells some more "European" influenced products like loaves of bread, pastries, etc. 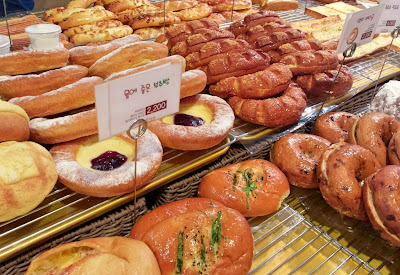 So, the prices are kind of steep for bread in Korea, but each is made freshly throughout the day.

EDIT: After doing some poking around after posting this post, I realized the prices have increased slightly since my visit.

For example, this is Boochu Bread (Chives Bread). It's 2200 KRW, which is kind of pricey for this type of bread. I got it and I can totally tell you that it's 10,000x better than the chives bread you can get at a chain bakery. The quality of ingredients are great and I really liked that they brushed the top with some salted butter. It made it nice and glossy and also kept it nice and moist inside.

Definitely eat this one fresh! It's delicious when it's still warm from the oven. 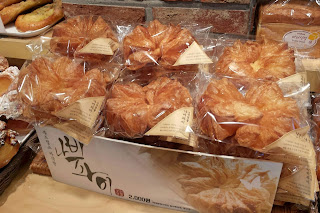 This is the FAMOUS butterfly pie. It's kind of the claim to fame for the bakery. As a result, you can imagine all of the tourist ajummas/ajeosshis were piling these onto their trays to bring home as souvenirs. They keep them nicely stocked as a result. The butterfly pies are 2,000KRW each.

This is a pretty unique item. I don't think I've seen it at any other bakery in Korea in all my years living there. So, this would definitely make a nice treat for colleagues, classmates, host family members, etc. 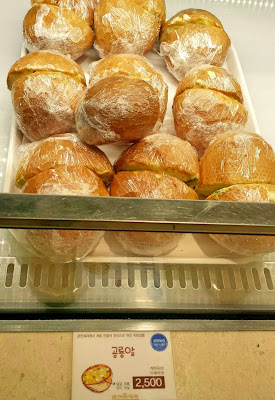 This is the other unique item sold at this bakery. It's a "Dinosaur Egg" (2500 KRW). It's another of those "must have" items at Gungjeon Bakery. They, probably obviously, are made to look like a dinosaur egg. They are filled with egg salad. 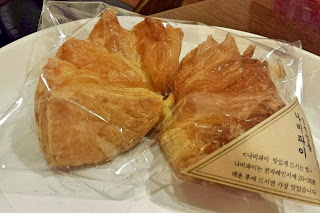 This is the Butterfly Pie. It's shaped like a butterfly, obviously. It's made with flaky pastry dough. The closest equivalent I can think of to the texture and flavor is this Korean cookie (buy from Amazon).

It was great! I can see why people flock for this treat. It's really like an entire box of those Korean cookies in one sitting, but made fresh!

It's not too sweet, so that was great. It had just a touch of sweetness.

If you're curious, yes, you can pull off layers. Also, yes, it is flaky so it does make some flaky crumbs. So, probably not the cleanest snack for the kiddos. 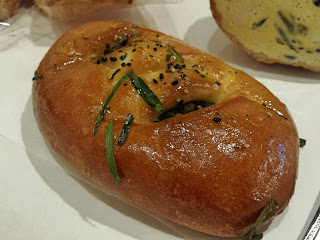 So, the glistening of this bread really got me. It was also right out of the oven and then so many people grabbed them, so, by the time I made it there, only a handful were left. Since it literally flew off the shelf, I knew it must be good.

This was seriously so good. I'd definitely recommend getting the chives bread if you see them bringing out a fresh batch.

Ours was fresh and was still warm when we brought it upstairs to the seating area and dug into it. 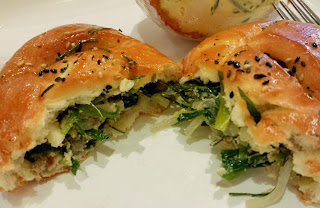 As you can see in the picture, the filling is made up of onions and chives. It's so flavorful. I don't know how they did it, but the chives were still somewhat crunchy, so you know that they're fresh!

Do know that it is pretty flavorful, so it tastes a lot like onions and chives. If you're going here on a date, maybe bring some breath mints (or even not, you may still want some breath mints). I am also saying this to warn you to plan your eating around this item. It'll maybe affect the flavor of anything you eat after, so maybe it won't taste so good with cake, for example. 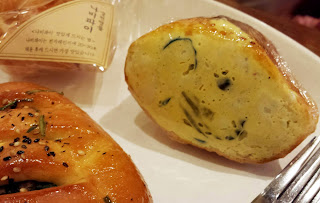 This is the dinosaur egg. It's filled with egg salad. I was a little leery since I'm not a huge fan of egg or egg salad for that matter. But, Korean egg salad is a bit different than American egg salad. So, if you've never tried Korean egg salad before, you may want to check this out for the novelty of it all.

The outside of the egg is made of a crusty bread, which is quite smart. It keeps the egg salad contained and also doesn't get too mushy. 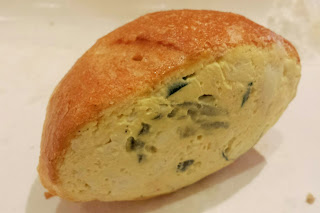 So, this Korean egg salad is made fresh, so that's why my hesitation was fleeting. I am still kind of iffy about Korean (and Japanese) convenience store egg salad sandwiches even though I know so many people who say they're great. Anyway, I knew the egg salad here was made freshly with quality ingredients.

The egg salad is somewhat unique. It has both pickles (Korean sweet pickles, not dill) and fresh cucumbers and also some pieces of crab. 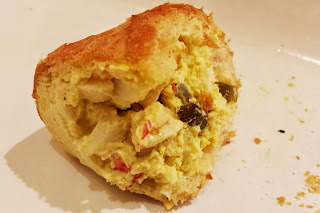 Sorry, I wanted to give you an extra cross-section shot, but I realize that it looks kind of unattractive.


I also want to say that this seems kind of small when you pick it up, but it's super duper filling!

Also, this item has to be refrigerated. 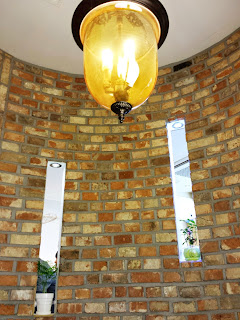 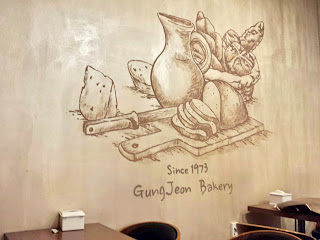