There are still a couple of weeks before Thanksgiving. If you're headed to New York City, perhaps to see the Macy's Thanksgiving Day Parade (or not), there were still a few spots left at The Smith for your Thanksgiving dinner.


We went to the location at Lincoln Square, right across from Lincoln Center. It's a convenient location if you decide you want to check out the Thanksgiving Day Parade or have tickets to see a show, like My Fair Lady. It's also quite walkable to the theater district.

These pictures were taken last year, but the menu appears to be the same. For reference, this is the official menu: https://thesmithrestaurant.com/thanksgiving2018/

I made some notes in my phone last year in preparation for this year's post. I think, for this year's Thanksgiving Dinner post, I'll try to post right after eating it and then repost next year. What do you think?

First off, this was a comically large amount of food. Our table was not big enough and we ended up bringing home like 10+ pounds of food. However, it's doable, I guess. There was a single diner next to us living her best life, reading books on her Kindle. She actually was able to finish off almost everything and I definitely applauded her internally. 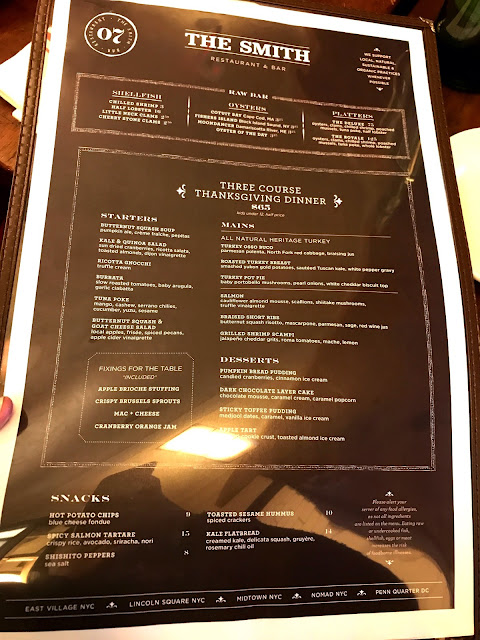 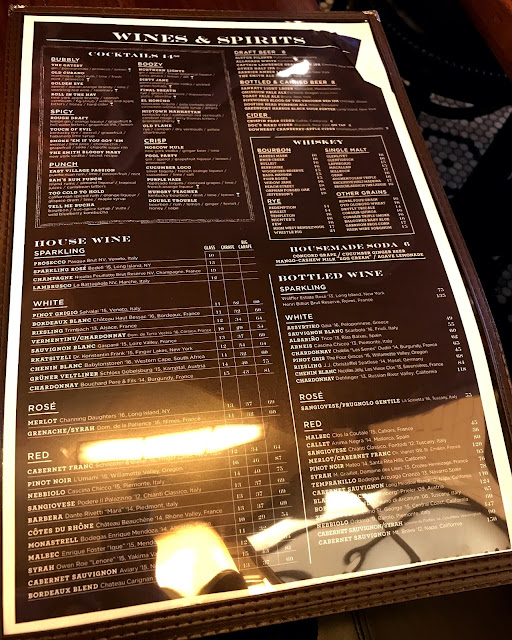 Cocktails:
There were a few seasonal cocktails. They're also relatively inexpensive for the area at $14.50. There were a few selections that you can choose between depending on your liquor of preference and flavor choice. 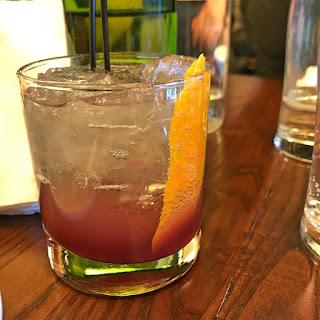 There are also a variety of wine and beer options if you prefer those over cocktails.

Starters:
There are six options and we chose four of them. I was tempted by the tuna poke, but decided to go with a salad. 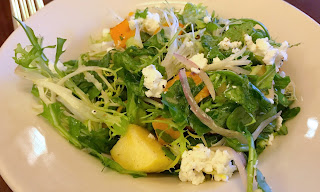 This is the salad - Butternut Squash and Goat Cheese Salad. The vinaigrette was nice and light, yet flavorful. I liked the crisp crunch of the apple with the soft goat cheese texture and the crunch of the greens. I would recommend this salad if you were planning on getting a relatively heavy option as your main. 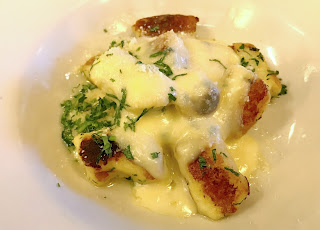 This is the Ricotta Gnocchi. We were all a bit hesitant because the truffle cream seemed like it may end up being way too heavy. It was pretty heavy, but not too much so. It was pretty delicious, but you would probably want to share the starters between everyone at the table if you decided to go with the gnocchi. 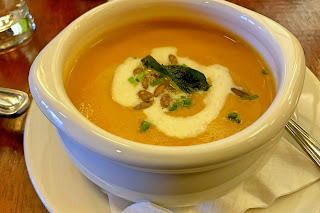 Butternut Squash Soup was also quite good. The ale flavor was pretty subtle. The pepitas added a nice texture and crunch to the soup. On the heaviness scale, this was probably in the middle since squash is an inherently filling food. 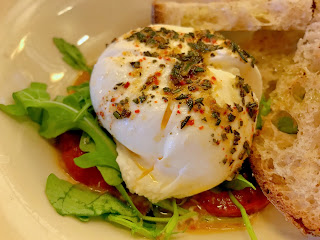 This is the Burrata. It was actually quite flavorful. All the ingredients were quite fresh. Since there's also a bread basket (not pictured), this could be a lot of bread, so plan your stomach room accordingly. 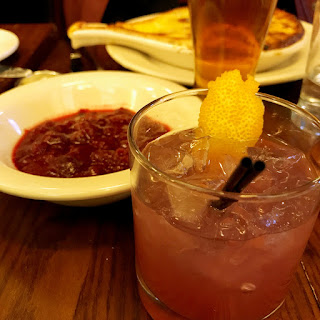 The Cranberry Orange Jam was nice (I love cranberry), but it was brought out in a weird order. It came with all the other food, including the mains. Maybe I just don't know how to eat jam, but I would think it should come out with the bread(?). Please correct me if I'm wrong. 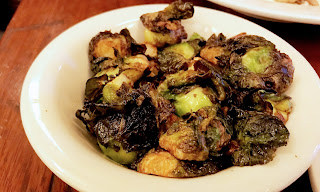 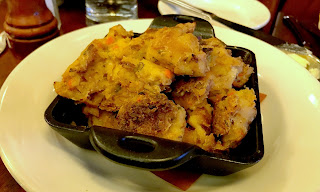 Typically, I love stuffing, but this Apple Brioche Stuffing wasn't my favorite. I think I really love stuffing when it gets nice and crispy/crunchy, so this was a little moist (?) for my liking. I also typically add tons of white pepper to stuffing when I make it. The flavor was nice, though, definitely something I haven't tried before (there wasn't any white pepper). I did take the leftovers home and baked it again and it was much more my style after I baked my leftovers. 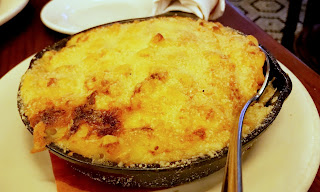 This is the all-famous Mac & Cheese at The Smith. This is one of the things that you must always order at The Smith, it's kind of a rite of passage. This Mac & Cheese isn't quite as rich as the Mac & Cheese at Jacob's Pickles. Me and my lactose-sensitive self still cannot consume massive quantities of it, but I definitely have consumed my share. I especially like the crispy edges that touch the cast iron. I also really like the bread crumbs on top. 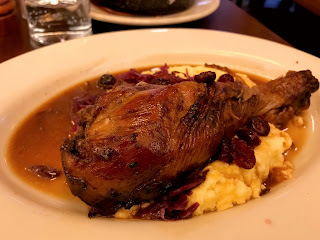 This is the Turkey Osso Buco. I think this was one of our favorites of the mains. The turkey was so tender and fell off the bone. It was crazy. It was so flavorful. The Parmesan polenta was a bit heavy, but it was quite tasty with the au jus. 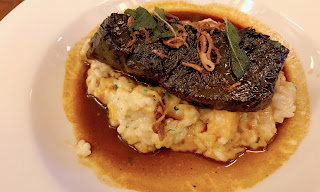 This is the Braised Short Rib. Sorry about the unclear photo. The short rib was delicious. It was so tender and flavorful. It actually did kind of melt in my mouth. The butternut squash risotto was a bit heavy, though and not my favorite flavor combination. From my research for this post to keep it current, it appears they have swapped out the butternut squash risotto for pumpkin spaetzle and added Brussels sprouts. I guess this year's combo is more my style. 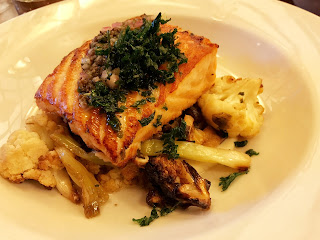 This is the Salmon option. This was easily the second favorite of the table! The sides for the salmon were mainly vegetables, so that would at least make you feel like you're slightly healthy even though you've probably eaten a ton of heavy food by this point. 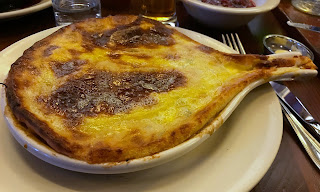 This is a beast of a main dish choice. This is the Turkey Pot Pie. None of us knew what to expect with this one. The crust was super buttery and rich, not quite as flaky as we had expected. The inside was creamy, but had an ample amount of turkey and vegetables, too. I think this is a pretty unique option, but probably not the most traditional or classy of choices. It's definitely hearty, though. We ended up taking a pretty sizable portion home. This was also one of those options that was pretty good heated up again in the oven, FYI. 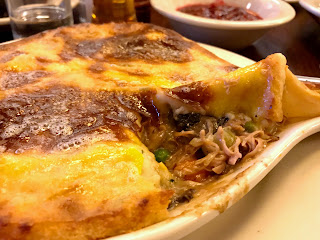 Desserts:
Luckily we were all kind of pacing ourselves and had it in our heads that we wanted to get through the dessert since ice cream-containing desserts do not typically transport well.

I would say, if you can't decided on the dessert, maybe make your choice by the type of (ice) cream that's served alongside.

We had one repeat, so there's only three dessert pictures here for you. 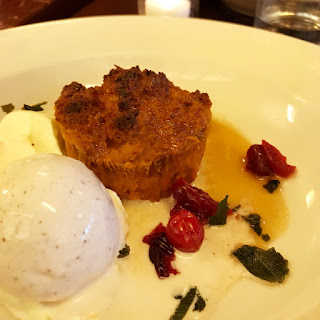 This is the Pumpkin Bread Pudding (not on this year's menu at Lincoln Square). Honestly, this wasn't my favorite. I thought it would be delicious because I really like pumpkin, not in the pumpkin spice type of way, and I like bread pudding, but it was just kind of...dense and not that yummy IMHO. The best part of this dessert for me was the cinnamon ice cream. It was quite photogenic, however. 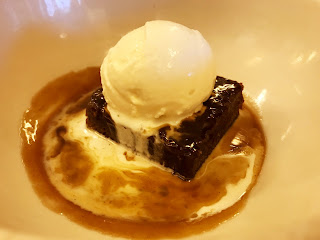 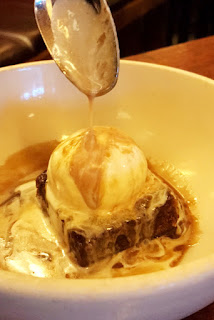 Since two people at the table got the Sticky Toffee Pudding, I decided it probably deserves two pictures. This is also a pretty famous option at The Smith, but the serving size is usually much larger. It is pretty sweet, but the vanilla ice cream balanced it out a bit. 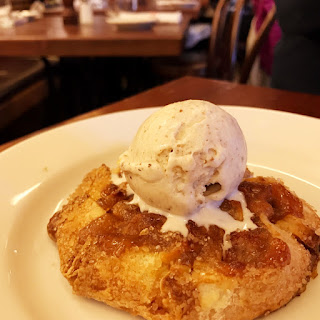 This is the Apple Tart (not on this year's menu at Lincoln Square). It was the perfect size. It was kind of sweet, so be prepared. I really liked the toasted almond ice cream since it kind of added a slightly savory flavor to the dessert.