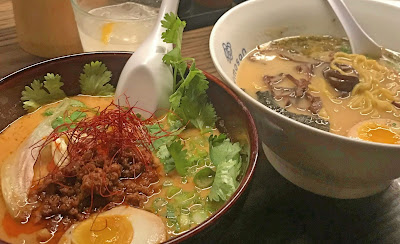 It's quite popular, so if you go on the weekend or Friday night, you should definitely expect a wait. We sometimes wait about 35-40 minutes. It all depends on timing. The tables are kind of family style, so you'll probably be seated at a large table surrounded by strangers.

Depending on your luck or the mix of people, you may be in an awkward situation like we were one time.Basically, this Dutch couple wanted to chat the whole time and kept offering us kimchi like it was something fascinating and spectacular (I don't eat kimchi even though I'm Korean and have lived in Korea so long...like everyone else in my Korean nutritional epi lab, we just don't think it's a good idea to eat) and then we felt compelled to share our food, but we really didn't want to share 😕 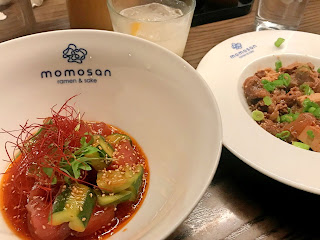 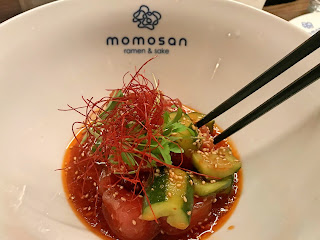 Definitely get the Zuke Maguro. It's delicious and a definite must for tuna fans. The cucumber is really fresh and crisp. The tuna is also quite fresh. I would say though, it was a bit heavy on the oil, so that may be a turnoff for some people. The flavor was fresh and light. I was a little worried maybe it'd be too salty, but it was just the right balance of flavors. 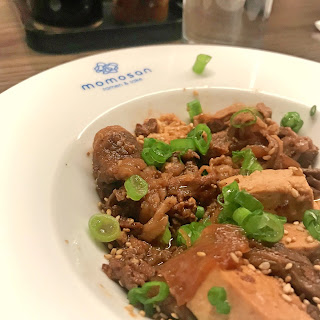 This is the Niku Tofu - simmered beef and tofu. This is one of my favorite homestyle Japanese foods. It's such a comforting food. At Momosan, the Niku Tofu was quite flavorful, slightly sweet, and pretty hearty. I actually preferred the tofu. It somehow took on enough of the flavor to be so yummy. The beef was quite thinly sliced, but wasn't quite as tender as I am used to eating. It wasn't tough, but it wasn't melt in your mouth tender. 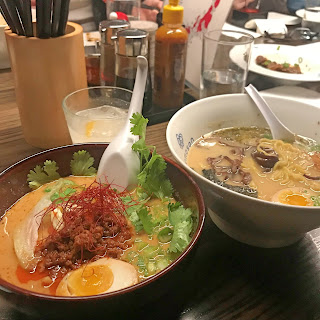 We got the Tantan Ramen and the Tonkatsu.

The Tantan!! Definitely get the Tantan! The broth is so savory and slightly spicy. The coconut curry flavor was very deep and added to the thickness of the broth. They also gave an ample amount of cilantro, which also added to my enjoyment of the Tantan (if you don't like cilantro, you can ask them to not add it to the top. The ground pork was very flavorful and a nice texture. I personally wasn't a huge fan of the chashu pork, but that's because I don't like pork very much. It was quite tender and flavorful, but I gave it to my boyfriend to add to his Tonkatsu.

The Tonkatsu (pork) Ramen was nothing special. It wasn't too salty and the broth was quite savory. Don't get me wrong, it's a good ramen, but it's probably not the best tonkatsu ramen in the city. It's one of the signature menu items, so maybe we were just unlucky. If I were craving a Tonkatsu broth ramen, I wouldn't probably choose Momosan first, but I also wouldn't say "no" if everyone else wanted to go.

All in all, I would recommend checking out Momosan if you are a major fan of Tantan noodles. It's also a good place to go if someone in your party is not a huge fan of ramen, but everyone else is craving it. The menu has a pretty big variety of food. However, this is probably not the best restaurant to come to if someone in your group is vegan. The menu options for vegans is extremely limited, if not non-existent. 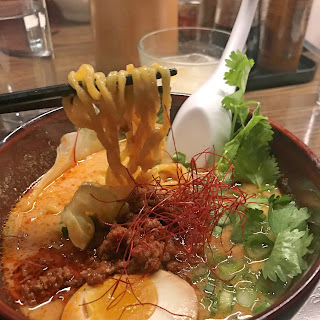 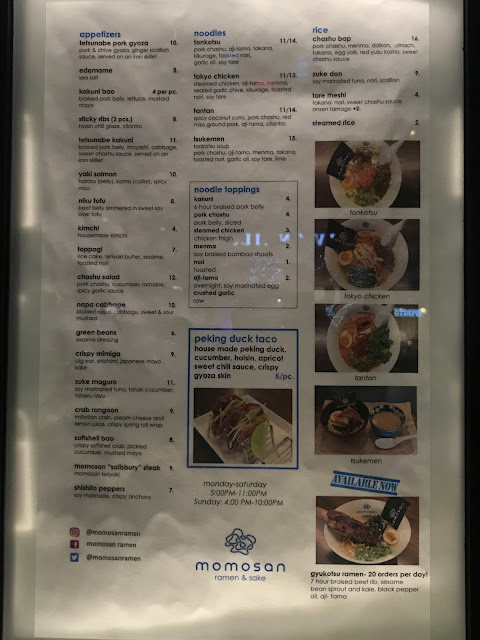