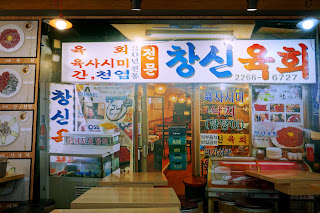 Book a Gwangjang Market Tour
If you go to Gwangjang Market (the market is somewhat famous when YouTubers visit Seoul), there are about 3 foods you MUST eat because they are the specialties of Gwangjang Sijang.

Also, Gwanjang market is also one of the places you can get sannakji - the octopus that is still living and served fresh to you (I can also write a post about that soon!)

Anyway, there is a whole row of shops that are famous for Yukhoe. The very famous one I wanted to go to was actually closed because we went at a weird time of day (and also on a red day), so we went to another famous place, Changshin Yukhoe.

I felt okay about going in here because there were relatively a lot of people in there and they all looked like blue collar workers, so I felt like they weren't just tourists that went to a random shop.

Yookhoe is a food you eat typically with alcohol. We were definitely the only people in the restaurant not drinking at 11am on a Monday/public holiday. 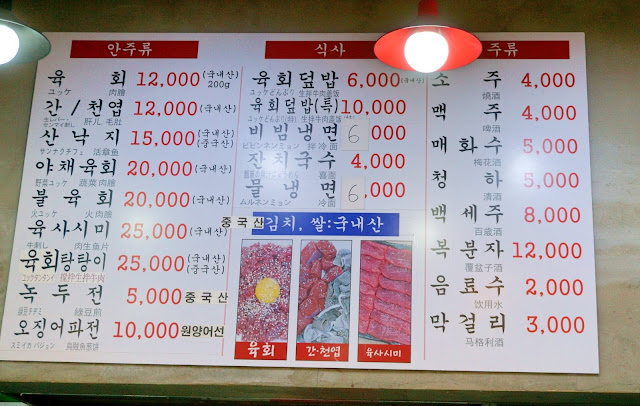 There's no English menu, but the menu has Chinese and Japanese written on it. I have translated the menu to English below. 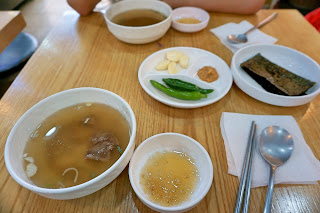 These are the side dishes that come with whatever you order. It's bare bones, but I didn't expect anything more.

You get seasoned kim (seaweed), a bowl with beef broth, and then also some gochu/garlic and samjang paste.

The second small bowl is sesame oil and salt. It's for dipping the yookhoe tangtangi we ordered. 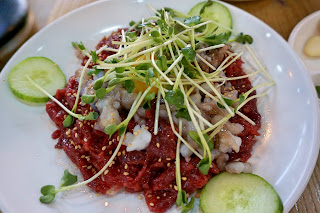 This is the yookhoe tangtangi. Everything was prepared fresh. It's all raw, so if you're squeamish, this is probably not the place for you. I felt okay since I saw them prepare everything.

It has steak tartare (Korean sourced) with some sesame seeds and sesame oil topped with the sannakji (live octopus), a raw egg, and some Korean pear. For decoration they added some sprouts and cucumber (it may be zucchini - I didn't eat it).

I really don't care for sannakji that much just because it takes so much effort to eat, but it was a good way to get two of the things my boyfriend wanted to try off the list at one time for a relatively cheap price - 25,000.

I would say, however, if you wanted to do a full market tour, definitely try out the yookhoe deopbap instead. It's 6,000KRW and comes with rice, so it is cheap and not just eating meat. It doesn't come with the sannakji, though, so I guess it's a tradeoff.


If you've never ordered at a more homestyle sort of Korean restaurant, this is the ordering form. When I first lived in Korea, this was a lot more common, but I guess it's kind of going by the wayside. There's a special way to write numbers and everything, but I think not many young people write it that way anymore, so I won't try to explain it to you.
I'll go over the list from top to bottom even though I translated it above. You can just write the numbers in the column next to the prices to indicate how many orders of each you want. 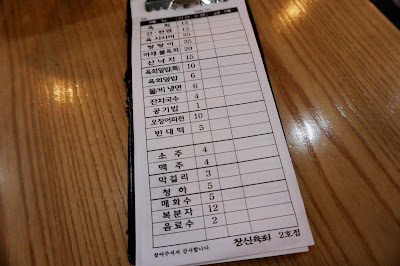