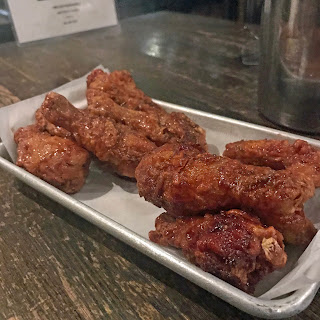 I've been trying out all the Korean fried chicken restaurants in NYC. This was one of the first stops - Boka in East Village.

We got the half and half - half spicy and half garlic. It's $21+ for 10 pieces of chicken, which is really expensive...even for New York. I guess it makes some sense, though.

Sorry I do not have pictures, the interior is very Korean style pub, like what you see around Korean universities. It's usually what you see in a makeolli bar, but I think it was on the menu, but the menu was kind of all over the place.

Cleanliness-wise a lot was left to be desired. Like, I know it's a bar...and I know it's a Korean bar and it's in NYC, but it was SO STICKY. Everything was sticky. The floors were sticky and the tables, also sticky. Let me preface this by the fact it was in winter (yeah, sorry this post has been a long time coming)...so it wasn't the natural humidity that was making the varnish/wax sticky.

So, we went at the weirdest time of day, so there was one other table in the restaurant. The service was less than extraordinary...far less. Pretty sure the server had a hangover, which I get, I guess...it was Saturday...at 3PM...

Anyway, the food:
So, as I said, the menu really is ALL OVER THE PLACE. There's like a bunch of random fusion food (like popcorn cauliflower), then a list of rice balls, and then random soup...and then randomly japchae, which is really random to find on a menu. 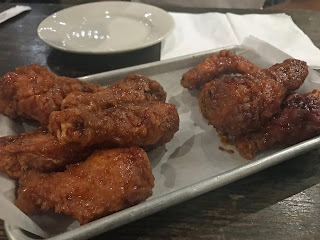 So, these are the chicken drumsticks. They're roughly $2 each. So, for $2 each, I would expect them to be amazing drumsticks. They were fine. They were crispy like Korean fried chicken to be. They were cooked thoroughly and came out hot, but they were NOT super memorable. These 6 months later, I don't think I'd ever crave them like I crave BHC Chicken and the chicken I am going to write about for next week's post! Overall, it'd be find if my friends and I were drinking there and wanted some anju, but I would not go out of my way to seek this chicken again.