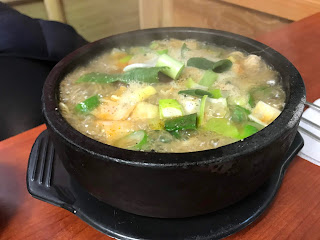 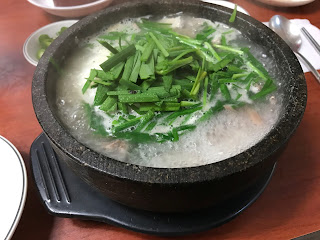 One day, my friend and I met up and she was on a really tight budget. The area around Gyeongbokgung is not really known for being super budget friendly, especially these days with the influx of the "hot places" and the tourist restaurants.


I ended up just going with the dwaeji gukbap (돼지국밥) (pork rice soup). It was good and somewhat light, which is kind of what I was looking for. It was 5,000 KRW. Make sure you salt and flavor it to your liking, otherwise it's just kind of water with some meat essence.

The broth was actually quite flavorful at this restaurant. I did a spoon test before adding my flavorings. I also appreciated now fresh the green onions were that topped the soup. Dwaeji gukbap is one of those like or just really hate foods amongst my friends. I'm in the "like" category. I would never crave it, but it's always a pretty safe option and it's quite comforting. I just wanted a mild soup (which is why I didn't go with some of the other options) because I was feeling a bit under the weather and I wanted to be able to control the amount of solid food (if that makes sense) that was in my broth (you're typically served the rice in one of the metal rice bowls and you add it yourself).

My friend decided she wanted to be "authentic" and went with the 선지국, which is basically a spicy hot broth soup flavored with coagulated ox blood. At this particular restaurant, there was a patty of ox blood in it. It was 9,000KRW.

I did try some. The vegetables were super fresh and crisp still. The broth was flavorful and not overly salty. It was a bit spicy, though, but not like death to my tongue spicy.

We both got specialties of the restaurant, so definitely check them out. 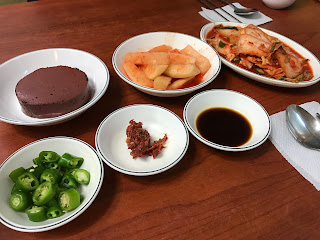 These are the bare bones side dishes we were served. The kimchi was actually pretty good. I don't usually like kimchi because of the influence of my nutritional epi work at SNU, but this one wasn't super fresh and it wasn't the really really fermented kind that you put in kimchi jjigae. It's at the sweet spot for me.

My friend actually ended up cutting more of the blood patty thing and adding it to her soup to enhance the protein value. 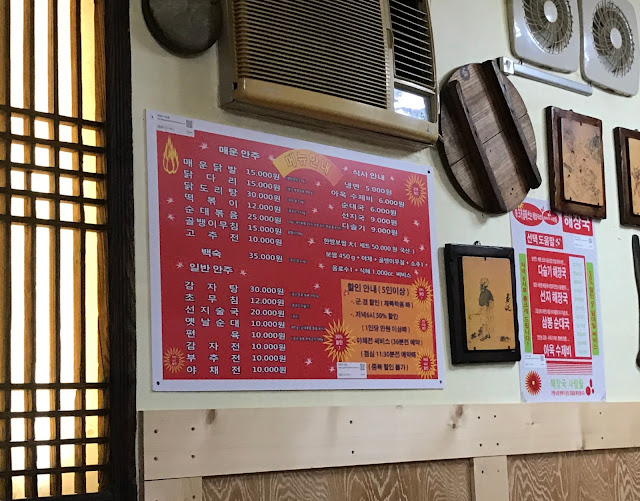 In terms of the menu, it's pretty obvious that this is a drinking spot for ajeosshi since most of the food on the menu are foods you eat while drinking.

Entrees:
냉면 - cold noodles 5,000KRW
아욱 수제비 - I'm not entirely sure what 아욱 is in English, the dictionary says "mallow," it's basically a kind of spicy green leafed herb that is good for digestion...anyway, this is mallow sujebi (sujebi is hand-pulled dough disks) -6,000KRW (I believe this will be meat-free, but sometimes it's topped with some ground pork, so just ask)
순대국 - soondaegook Korean blood sausage soup - 6,000KRW
선지국 - coagulated ox blood soup (what my friend had) - 9,000KRW
다슬기 - snail soup - 9,000KRW

(Apparently what I ordered isn't printed on the menu I took a pic of, it was a special menu item, sorry, but it's 돼지국밥 and is 5,000KRW)

Everything is very cheap and probably SUPER healthy. So, if you're not at all squeamish about trying new foods, definitely check this place out. It's probably one of the most authentic places you'll visit in the Gyeongbokgung area.