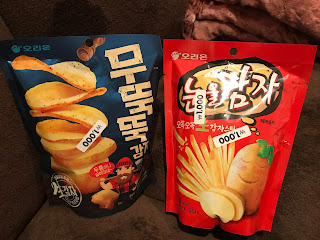 I went on a little Daiso potato chip shopping session and picked up a couple of my favorite Orion potato snacks!

Gah! These are kind of my go-to potato snacks in Korea, well, these and Oh! Gamja (Oh! Gamja just has so, so, so many more flavor options).

Orion is a snack brand in Korea. They have been branching out from the usual Choco Pies, etc. and now have a few potato snacks including 눈을감자 (red bag) and 무뚝뚝감자칩 (blue bag). These aren't new per say, but I just haven't written about them before.

Both of these potato snacks are made using fresh potatoes, so that's also really nice. 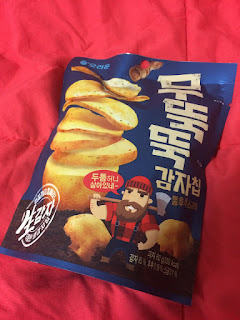 So, I found these guys at Daiso, which is also my favorite place to snack shop because it's easy to find new products and also some hard-to-find products there at cheap prices (like remember honey butter chips from a few years ago? Yeah, well, they were sold out everywhere or if they were available, they were being sold for the price-gauged price of like 4500KRW, but I was able to always comfortably find them at Daiso.

Anyway, I discovered the blue bag (muddukddk gamja chip) when it first came out because my local convenience store was selling it for l+1.

I decided to check it out because the flavor is black pepper and my favorite potato chips ever are the salt and black pepper chips from Trader Joe's, which are obviously not available in Seoul.

The bag is not resealable, which is not really an issue because I love potato chips, but if you don't want to eat it all in one go, it's a little annoying.

The chips themselves are cut very thickly. It's like you were making potato chips at home by hand. They were perfectly crisp and the flavor was quite nice. It wasn't as black pepper flavored as I had hoped. In retrospect, I think the reason I like the TJ's chips so much is because the black pepper is coarsely ground, whereas this one is kind of fine ground black pepper.

It's also quite salty and not very sweet (as you know from my other Snack Attack posts, Korean chips tend to skew sweet), so these were a welcome change.

Since these chips are thicker slices than usual chips, they don't tend to have the "curled" or "folded over" appearance...you know what I mean. So, the flavor is always evenly distributed across the chip.

I forgot to take a picture of the red bag (nuneul gamja) before I devoured it, sorry.

These are quite nice, too, actually. They were the original potato snack from Orion...pretty sure. They are cut into little sticks. Unlike the Calbee potato sticks (Amazon link for reference), the Orion potato sticks are really thin (not as thin as Pikniks (Amazon link) - I didn't know they still made these). I guess in fast food terms, Clabee potato sticks would be more like Burger King fries and Nuneul Gamja is more like McDonald's fries.

The name for Nuneul Gamja is kind of clever, too. Gamda means "to close" in Korean and nun means eyes, so it's like "Let's close eyes."

They're super crispy. When you bite into them, you definitely get a satisfying crunchy snap. The flavor is kind of hard to describe. I think it's kind of like a light seasoned salt, but it's kind of sweet, too. Next time I pick some up, I'll try to remember to take a look at the ingredients (I don't tend to read ingredients because I kind of think reading them sometimes turns me off of a product, don't you agree?).