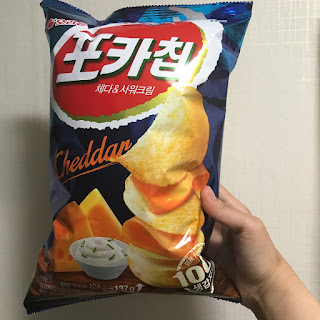 Are the Cheddar and Sour Cream Poka Chips as good as cheddar and sour cream Ruffles?


One of my guilty pleasures in terms of potato chip flavors is Cheddar and Sour Cream...especially the really cheap Ruffles brand...I can't eat that many of them or eat them that frequently, but when I do it's definitely satisfying. So, I was quite excited when I saw this flavor pop up in my local convenience store.

Also, since my Korea trip is coming up soon (like in less than a month, eek!!!), I was thinking of doing a fun sort of comparison of Korea vs. American chips for a post. What do you think? I was also thinking of dabbling into the linked YouTube channel for this blog (since they're all powered by Google). So, maybe that might be a fun first try at an awkward video.

So, anyway, back to these chips.

I was SO excited since it had been a long time since I had cheddar and sour cream chips, so I thought I'd test it out.

Sadly, Poka Chips are the flat chips, not the small ridged variety like Ruffles, so the flavor doesn't get trapped in the ridges as much.

Flavor-wise, it's passable, but it's not exactly the flavor I was craving. I think they adapted it a bit to fit the Korean flavor palate, as to be expected. As a result, it was kind of sweet...not like super sugary like they used honey or something, but definitely the cheese was a sweet cheese, not the salty cheddar like I get back home (in Minnesota, if you're curious). Or, maybe it was a sweet sour cream component? Not sure.

It was kind of chive-y, so that was also a little unexpected for me.

So, in summary, if you're American and have been in Korea for a longggg time and need your Cheddar and Sour Cream fix without paying for the crazy foreign market price, this is a passable alternative.

If you're a traveler and just want to try fun potato chip flavors in Korea, this isn't really worth it.

If you like this kind of post, check out my other Snack Attack posts! I have eaten a ton of other Korean chips.