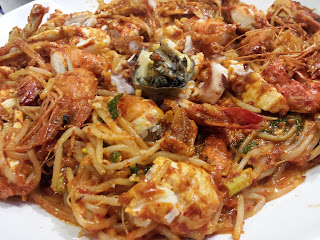 On my trip to Busan, I just had to have some must-eat spicy braised seafood at Jeongdongjin Haemuljjim.

When you go to Busan, one thing you have to check out is the seafood, obviously. I was recommended this haemultang/haemuljjim restaurant by my co-worker, a Busan native, so we had to check out Jungdongjin Haemultang (정동진해물탕). 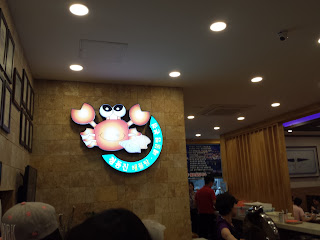 First thing I need to write down before I forget, but this place was packed. We had to queue for this huge restaurant. Not sure how many people were Busan-ites vs tourists, but I did hear a lot of the Busan dialect.


MENU:
The menu is pretty simple and everything is seafood-based. I tried to label the menu to make it easier, but it made it super hard to read, so I will type the original Korean and English translations next to them. 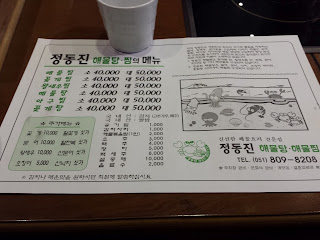 *The asterisked part says you can request spicy kimchi if you would like. 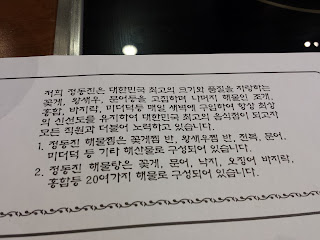 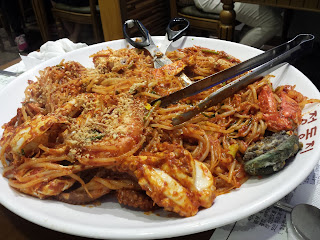 So, we decided to get the Haemuljjim in the small size. I wasn’t really feeling like having a stew that dinner. Looking around at the other tables, most of the others also got the haemuljjim.
Does anyone else do that? When you go to a place for the first time and then you look around and determine what to get based on the volume of other people who also ordered the same item? That’s not what we did, but it was reassuring.

The waitstaff was really nice and friendly and the service was prompt. 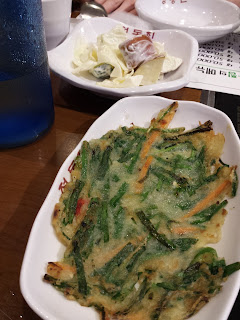 They brought us the Korean side dishes first. Just a warning, if you’re anti-mayonnaise like me. Don’t look at the apples…they’re covered in mayonnaise...
We all really liked the pajeon (green onion pancake). It was really thin and not too greasy (even though it may look a little greasy in the picture). 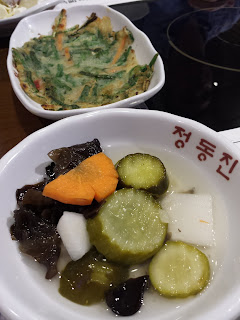 Also included are some fresh pickles. I am not really a fan of pickles, but I tried one of the brown guys and carrot (I don’t like pickled cucumbers, I think it’s a texture thing). They were fresh, so it wasn’t too brine-y.
We also got some soup, fresh soft tofu, and some seaweed salad. 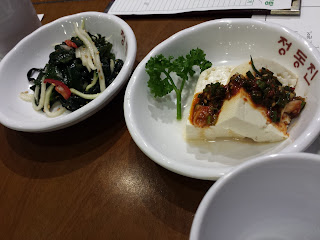 Next out came our haemuljjim. I know some at our table were SUPER worried because it was so red when it came out. It actually wasn’t spicy. I’m not sure if it is usually not that spicy at this restaurant or if they made it less spicy because it was me + a group of white people…hard to say. I do know that usually when I get haemuljjim with Korean or East Asian friends in Seoul, it’s usually spicy to me. Some of my eating companions did find it spicy, so we did have to add a side of rice later in the meal.

The spice worry out of the way, the seafood was very fresh. There were large pieces of crabs, large shrimps (prawns), abalone, octopus, 미더덕 (warty sea squirt – according to my dictionary), and some clams with some bean sprouts mixed in for good measure. 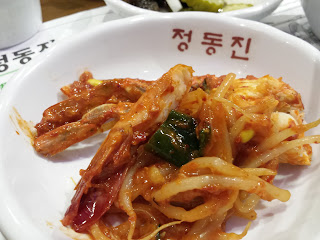 Let me also state that I’m not the hugest fan of seafood because it’s so much work to eat with little reward for your efforts. So, I kind of kept with my octopus and abalone because they required little work…and also because my dining companions were all over the crab and I didn’t want to take their joy away.

That being said, there is definitely a good mix of seafood in Jungdongjin’s dish to make it possible that you can get some of everything and you don’t feel cheated. You know…like how sometimes there’s only one small piece of crab and the rest is all clams or some other cheap dish.
Overall, would I eat there again? Yes, probably. But, in true honesty, there’s probably plenty of other places to try in Busan before I would go back here.

DIRECTIONS:
Address to give to the taxi driver:
부산 부산진구 서면문화로 37

Alternatively:
Seomyeon Station (Lines 1,2), go out exit 9 and follow along that street. You should pass two CU convenience stores on your left with the second one being one street before you get to the building with the 정동진 해물탕 해물찜 storefront.