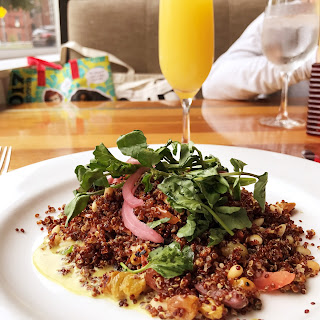 On a recent weekend trip to DC, we stopped off at District Commons in Foggy Bottom for some bottomless brunch.

The location is great for GWU students living on/near campus. The prices were slightly higher than I would have thought for what seems like a student hangout spot, but they were about on par with the other brunches in DC (actually cheaper than the other bottomless brunches in DC).

The dining room is quite massive actually, so it can get loud if it's busy. The weekend crowd was kind of mixed, actually. It was definitely skewed towards young female groups of 2-6, but there were also families and some groups of middle age adults. There were a few children at brunch, so maybe this is a child-friendly brunch, too.

We each got a bottomless brunch (mimosas and bloody Marys). What's nice about this one is that everyone at the table does not need to participate. 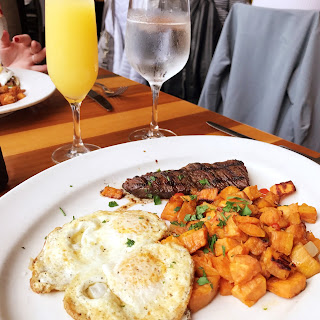 This is the steak and eggs. I kind of laugh now that I see the picture...look how teeny tiny that steak is. It's like a steak finger. That being said, the meat was actually quite tender...which is kind of a feat given how small it is.

The sweet potato hash was nice, but we weren't really sure what made it a "hash." It's kind of just sweet potatoes...with some salt and a little seasoning.

Do you the reason steak and eggs is listed in quotation marks on the menus is because it's not really a steak because it's so tiny? Speculations requested. 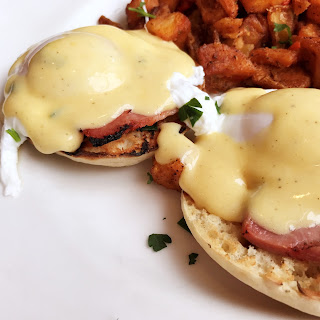 This is the Eggs Benedict. Not really much to say about these. The hollandaise wasn't broken. I think it didn't stick out in any way, so that's kind of a good sign. 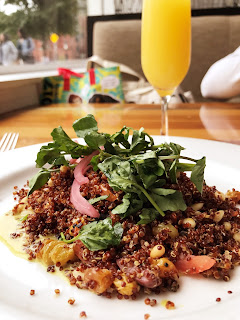 I got the Roasted Portabello Mushroom. I wanted something light since we had eaten a really big burger the night before. It sounded like it was going to be really nice, filling, yet light. It's coincidentally vegan (there are plenty of vegetarian and pescatarian menu items, actually).

Overall it was really good. The flavors were really nice together. UNTIL...I ate a bite and there was a really really briny-salty olive in it....which completely ruined the whole thing for me. I thought maybe it was a fluke and maybe something got in in there by accident. A few bites later, though, I got another olive...and there went my enthusiasm for the dish.

I really wish they would have listed the olives on the menu, because I would have gone with my second or even third choice. 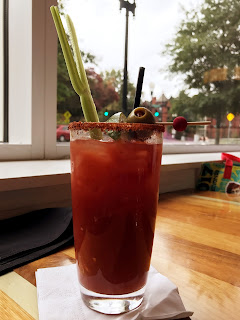 For the most part, we stuck with mimosas, but I switched it up for my last drink and got a Bloody Mary, just so I could let you know how it was. It was fine, but VERY vodka-y. Sometimes bottomless brunch places water down their drinks, but both option were pretty normal.
The service was actually pretty okay, but I had really low expectations after reading other reviews online and after my one visit years and years ago. The service was attentive at first, however after like 2 drinks, our waitress and the other waitstaff was nowhere to be found. The first refill, they came without us even having to mention anything and topped us off. However, after that, we had to ask about four times to get a refill. So, maybe plan ahead with that in mind. If you know you're going to want a third drink, make sure to try catching someone's eye about halfway through your second drink.

Overall, I may consider coming back here again for bottomless brunch in the District, especially if I'm with a large-ish group, but if I'm with a smaller group, I'd probably head over to Founding Farmers (review here).

You can make a reservation via OpenTable. 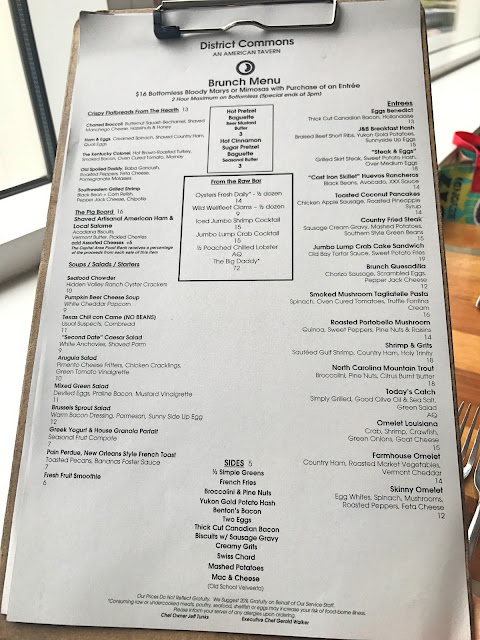