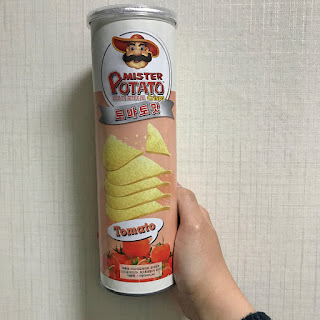 Lotte Super carries a brand of fake Pringles for only 990 KRW! Who can say no?

I had a craving for Pringles one day after work, so I headed out to Lotte Super. I was in the chips aisle and I noticed they sold Mister Potato brand chips...for 990 KRW, a fraction of the normal Pringles price.

So, I didn't read...the Korean or the English....and also didn't look at the picture of the tomatoes...I just grabbed the red can, thinking it was going to just be plain.

I was wrong...and that's the story of how I got this weird flavor.

Since I was desperate for chips and I was too lazy to return it and also don't like wasting food, I decided to just...eat it.

The flavor was SO strange...but not like the sweet mayonnaise flavored Pringles flavor (a Korea-only flavor, I believe). It was not good, but it was also not terrible. I definitely wouldn't buy it again, but I could see why other people may like it.

It was kind of sweet, but definitely also tasted like tomato soup, a sweet tomato soup. Since I'm from Minnesota...and we're relatively close to Canada, for some reason my school served us ketchup potato chips a couple of times...an experimental flavor on Old Dutch's part perhaps. It definitely reminded me like that. So, maybe for the Canadian expats in Korea, this may be a taste of home for you?

The texture was just like Pringles and had it been a salt-flavored chip, rather than tomato flavored I would definitely say it was as good as, if not better than, real Pringles. The flavor was very evenly distributed. Maybe I noticed that because it was such a unique flavor?

Have you tried this or any of the other flavors of Mister Potato chips?