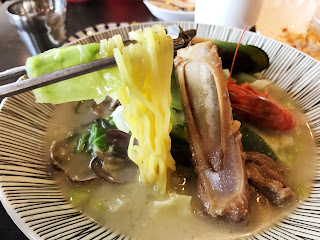 One of the best meals we had in Jeju was at Seopji Hyang (roughly translates to Scent of Seopji). 섭지향

I found this place while pursuing Korean blogs, but I think maybe there may have been other foreign tourists there because there is a English menu (very rough translations, but available nonetheless).

What drew me to this place was that it was a modern Korean twist on classic food and the simple menu - only 3 items.

We, of course, ordered all three items. There's actually a fourth item, but it's only available for pre-order.

All of the items are made to order and seemed very fresh. 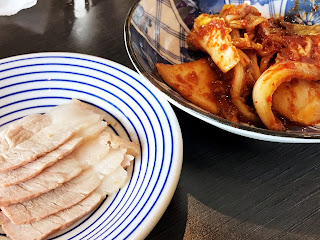 These are the side dishes. I actually don't really care for kimchi much, but the kimchi here was very nice. It wasn't too fermented and still had a bit of a crispiness to it. They also gave us some slices of pork. 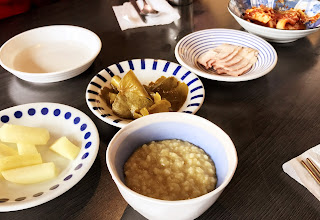 They also gave us some pickled seaweed/kelp and some pickled radish. The abalone juk (porridge) and the cheese sauce were provided as accompaniments to the abalone donkatsu we ordered. 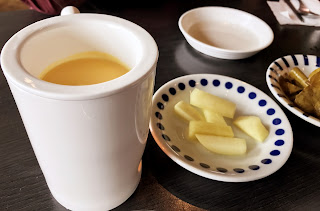 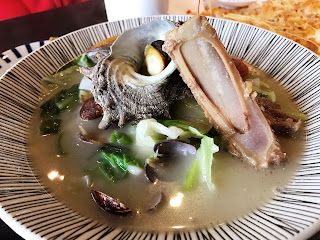 This is what it looks like when it comes out of the kitchen. The seafood is all very fresh and the soup is served VERY hot.

This is the noodle pull, just so you could see what the noodles look like. The flavor of the jjamppong is not like the typical red jjamppong. It's very similar to the Nagasaki jjamppong flavor. It's deceptively spicy. The great thing about this one is there are TONS of vegetables, all of which were very fresh. 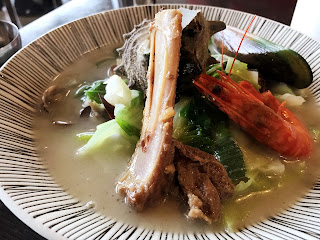 This is another top view. There's a large prawn on there, too. 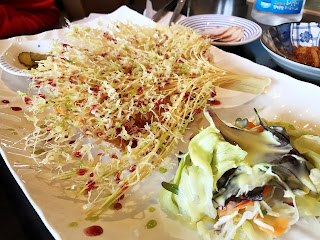 Sorry that the pictures didn't turn out so well. This was actually quite beautiful when it arrived. It's topped with what I think is some quickly fried noodles. There's a small salad on the side...and some...Korean pickles (rumor has it Koreans serve the bread and butter pickles alongside food when it's greasy to break up the grease, but that may have just been nutrition lab chatter). 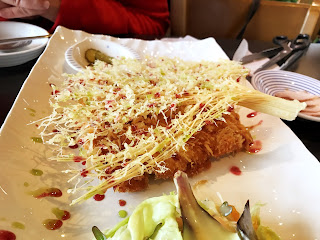 This is another view. Not going to lie...when it first came out, I was a little confused about it, even though I had read all the blog posts, but since abalone was a large part of the menu name, I thought it would be more prominent...so I was confused why it was a pork cutlet. Until I cut the cutlet and looked inside.... 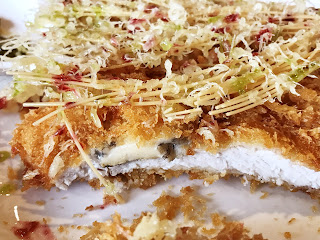 The abalone is in between the pork chop and the breading. Even though this was fried and stuffed, it didn't seem as heavy as I had expected. Some other restaurants' cutlets that had fillings were very heavy. The outside was very crisp and the inside was still quite tender. This is a safe choice for someone who maybe can't handle spice well. 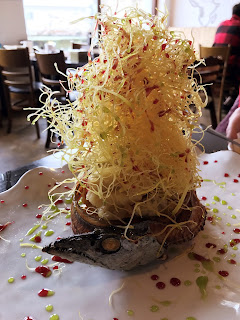 This was the craziest dish visually. I give the presentation 15/10.
It was also topped with that fried noodle topping. It added a nice visual, but also added nice texture to the dish itself. They also fried the remains of the fish itself, which also added to the presentation. Some people might think it's creepy, but I kind of think it's cool...am I weird for thinking so? Probably. 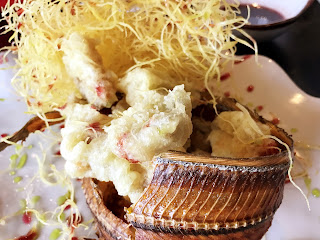 So, the main parts of the dish are in the middle. The fish is wrapped around the fried fish pieces, underneath the fried noodles. These were SO good! The fish was nice and tender and the batter was light, yet crunchy. It was great! Maybe a bit expensive for the amount of fish you get, but everything else was pretty reasonably priced, so treat yourself and feast your eyes on this prize.

Actually, Jeju food prices are SUPER high, so on second thought these prices are all very reasonable! 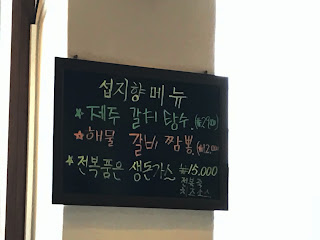 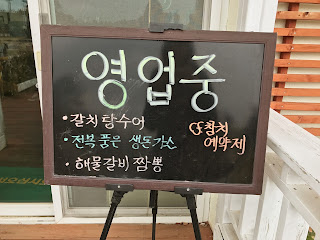 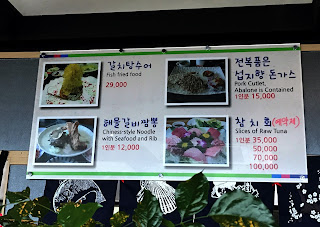 There is a parking lot next to the restaurant. Not sure about public transportation, though. Sorry! 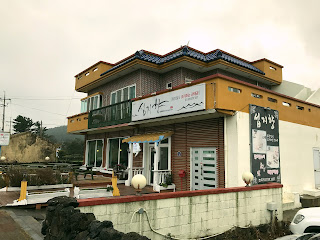