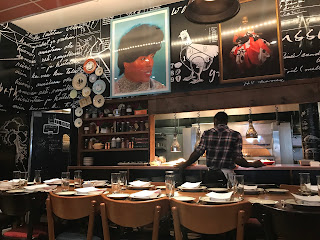 Red Rooster in Harlem is famous for fried chicken (yardbird).

I have been wanting to check out Red Rooster in Harlem for a while now, but I have always failed at getting reservations for brunch.
However, I finally made it!

I was waffling between Red Rooster and a ton of the other soul food brunches in the area, but the celebrity chef status of Chef Marcus Samuelsson (on Food Network Chopped, among other shows) kind of tipped the scales. 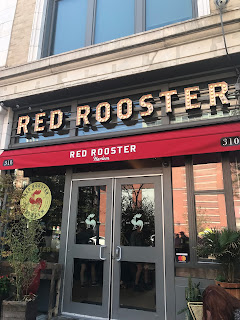 The exterior is kind of cute there are some...red roosters. There's also a little bench where you can wait if you're a bit early.

There are also a handful of outdoor seats for when the weather is nice, maybe about 10-20 seats. 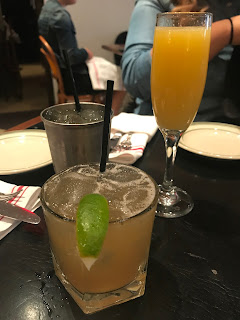 We decided to treat ourselves and get some brunch cocktails. I got the Earl of Harlem (bourbon and spiced earl grey tea) and the others got the Harlem Mule and a Mimosa.

I really enjoyed my Earl of Harlem. I thought the flavors were well-balanced overall and yet subtle. I would consider ordering it again if I ever make it back. The Harlem Mule was not the best Moscow Mule any of us have ever had and not the worst, either, same with the Mimosa. 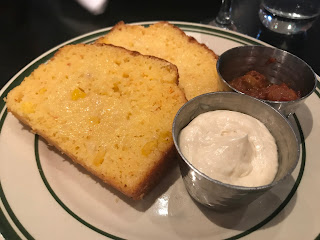 We started off with an order of the cornbread, which is accompanied with honey butter and tomato jam. They were quite concerned that there were only two pieces of cornbread, but it was definitely the right amount of food for us, especially since we just wanted to try it to figure out what all the fuss was about. The cornbread was kind of just...cornbread. I did like that there were actual chunks of corn in it and it wasn't just made with only cornmeal, but it wasn't that mind-blowing. We really did like the tomato jam. It really complemented the cornbread flavors! 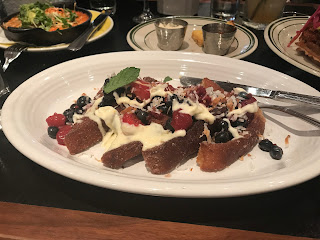 We were all separately intrigued by the West Side French Toast (orange creamsicle frosting, berries, coconut, and lingonberry), but were worried it was going to be too sweet. Answer: it was quite sweet, like our childhood selves would be soooooo happy to have ordered that french toast. If your entire party doesn't really have a sweet tooth, it would be a nice entree to share and accompanied a more savory dish well. The lingonberries were a nice tie-in or nod to his Swedish upbringing. Also, fun fact, there were a ton of Swedish people at brunch that day. 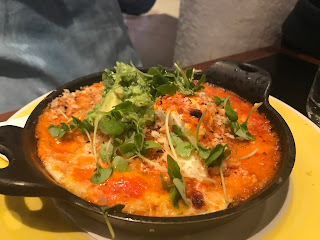 The Shakshukatory is Red Rooster's most recent brunch addition. It's 3 baked eggs, grits, ricotta cheese, and a spicy tomato stew. This was definitely the most "stick to your ribs" order of the brunch and it was definitely filling. The flavors were deep and it was nice and warm (probably a super great brunch order for fall/winter). It wasn't too spicy, so don't fret when you read the menu. Any spiciness of the tomato stew is kind of counteracted by the ricotta, eggs, and grits and also the little avocado mash on top. 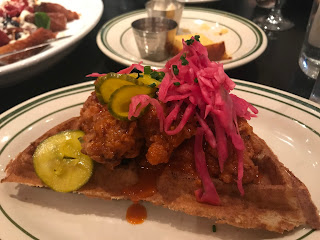 I knew I really wanted the Chicken and Waffles, like I had banked my carbs and calories that week so that I could order the chicken and waffles. We all agreed that this is probably the best food we ordered of the brunch. So, if you're looking for something safe, this one would probably be a crowdpleaser. I was a bit hesitant because I don't care for pickles, but I'm happy to say I didn't die. I probably would ask for them on the side next time so that pickle lovers would be able to indulge and I didn't have to have them. I really liked the slaw..it was sweet and kind of vinegary, so it was a nice melding with the hot sauce and the maple syrup on the chicken. Oh, the hot sauce was actually kind of spicy, so take that one seriously. It wasn't like firehouse spicy, but there was a bit of a zing to it. The chicken was the real showstopper! It was fried and, when you cut into it, it was nice and crispy on the outside, crunchy even, and the meat was nice and juicy and really hot still, too.

If I ever make it back, I kind of want to try the Yardbird. Have you tried it? What did you think? 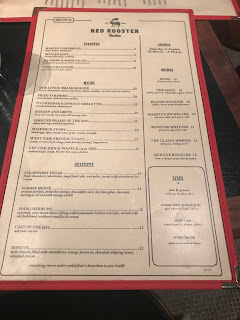 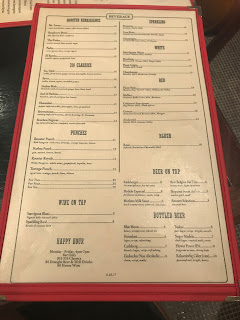