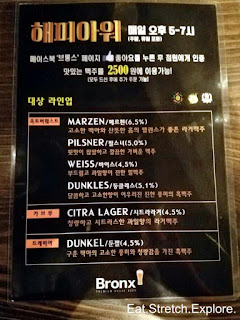 Bronx is a beer hall chain throughout Seoul and it has an AWESOME happy hour.

I usually go to the Sadang location because it's right by my house, but I have been to the locations in Yeoksam and Jongak.

All locations have this happy hour promotion though.

They have 6 beers that are 2500 KRW during the happy hour period. The happy hour runs from 5-7PM every day, including weekends and holidays.

The top 4 beers are from Oktoberfest. The middle one is from Kabrew and the bottom beer is from Trevier. The three breweries are Korean craft breweries.

I typically go for the Citra Lager, but sometimes I choose the Weiss. My friends tend to get the Weiss. If you like dark beers, you should go for the Dunkles or the Dunkel.

There are some rules, you cannot order another beer until you have finished your whole glass. It also says that you have to like Bronx on Facebook and show it to the worker, but I haven't ever had anyone check that before.

The full menu is available for purchase during the Happy Hour, so if you want some beer that is not on the Happy Hour menu, you will pay full price, but that means you get the full size glass (the happy hour glass is slightly smaller).

We also usually get some pizza. It's really, really thin crust pizza, but the pepperoni is real! It's kind of almost like a cracker crust. They kind of also put some sort of garlicky butter on the pizza, too, which is great.

They have expanded the pizza menu a bit, so we tried some of the new offerings.

In the future, I would probably stick with the pepperoni. We have shared the full pizza, rather than slices, in the past. It comes sliced into 6, but they are willing to make other slice arrangements, if you ask politely. It looks quite massive when they bring it out, but since it's so thin, two slices are about the actual volume of maybe one slice of an average large size pizza. When there's three of us, we are sated, but not necessarily full.

I have also tried the "House Food" and the "Dried Snack" on another visit. The House Food is a basket with country sausage, spicy fried potato wedges, and garlic bread (forewarning, this is Korean garlic bread, so it also has sugar on it). The "Dried Snack" is basically the traditional sort of ajeosshi bar snack basket of mixed nuts and dried pollack. 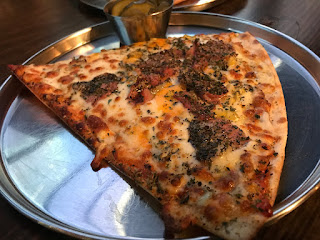 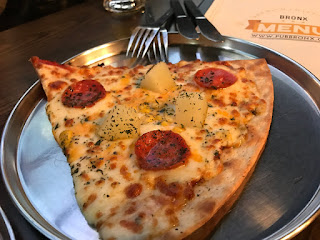 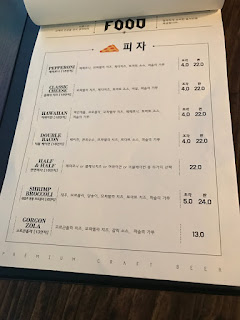 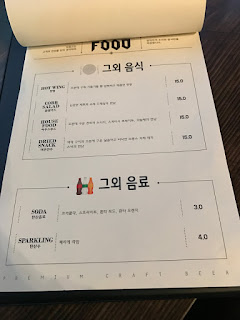 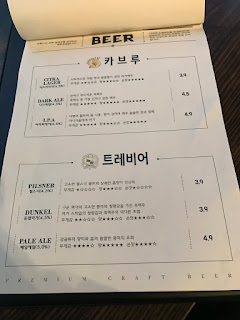 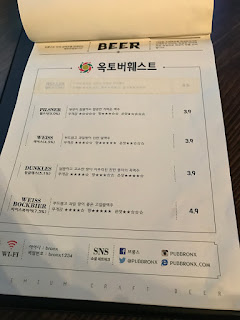 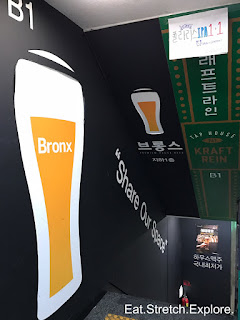 Location:
Sadang - Located right outside Exit 4, just look for the sign...it's in the basement.

Just leave a comment, if you want me to tell you how to get to a location near you.