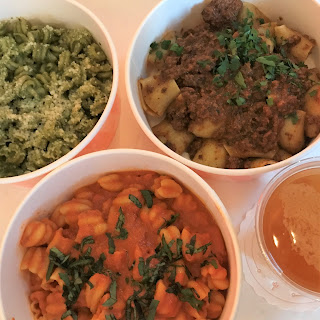 The Sosta is a new fast-casual Italian spot in Soho with cheap pasta options and wine on tap.

After seeing all the NYC food Instagrammers posting it, I had to check it out with my friend.

The most Instagrammable item is the Antipasto Board, but we decided to forego ordering that because we had planned to go on a slight food tour afterwards. 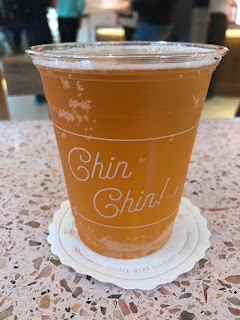 They have a beer and wine list, while not exhaustive, it's still quite reasonable.
I went with an IPA. Even though it may seem like a reasonable value on the menu, the cup isn't a pint, so it's really not a good value.

The coaster and cup are both on brand...with the "millennial pink." 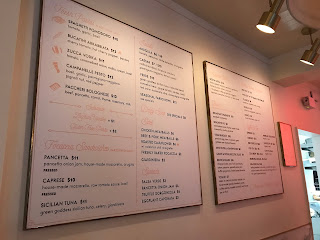 Sorry for the awkward angle, but I hope it's still readable.

The pastas are all less than $15.
You can swap out the regular noodles for zucchini noodles or gluten-free noodles for a small additional fee.

Most of the pastas do not have meat in them, so if that's what you rave, you could consider adding a meatball side.

The cartoon image to the left of the menu item is the shape of the noodle. 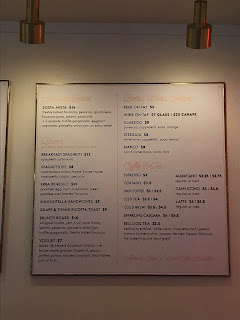 There's also a separate brunch menu for the weekend from 10AM to 4PM and a coffee/tea menu. 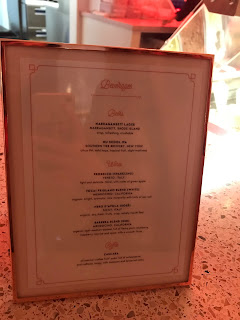 This is the beer and wine list for September, I believe there will be a rotating cycle. 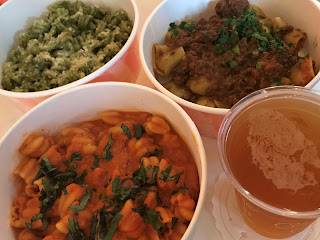 First off, let me state that the portions are hefty! The worker also made note that, in the future, the dishes will not be the paper bowls. It was cute she gave me a long speech about that...seriously, it was like a minute-and-a-half explanation of the dishes.
The pastas were all slightly more firm, slightly more cooked than al dente. 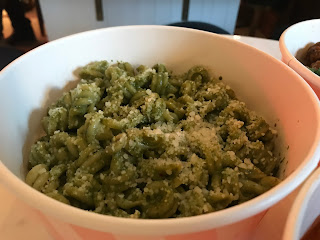 This is the Campanelle Pesto ($12). It's quite colorful and definitely Instagrammable.

However, it's SUPER salty. At first, it was doable, just moderately salty, but by the time you get to the end of the huge portion, it gets really salty. 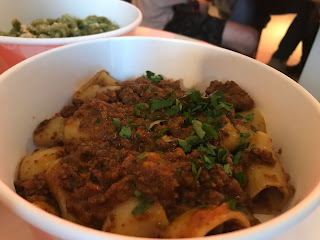 My friend's boyfriend got the Paccheri Bolognese ($13) because it is the only pasta that had meat in it. It has both beef and pancetta. As a result, it is pretty savory. After the pesto pasta, we were kind of worried it would be very salty, especially with the pancetta, but it wasn't too bad, actually. 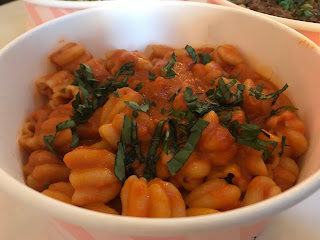 I ordered the Zucca Vodka ($11). We all agreed early on that this is probably the only pasta item we ordered that would be good the whole way through without getting bored or overwhelmed with the flavor. I liked the addition of the fresh basil on top. The pasta's shape made eating it kind of fun, but maybe that's because I'm still kind of a child. There were enough different levels of flavor, that it really was the only one that was good the whole way through. It was somewhat spicy, while still being creamy and tomato-y at the same time. 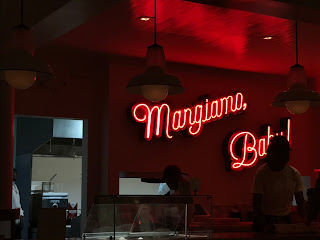 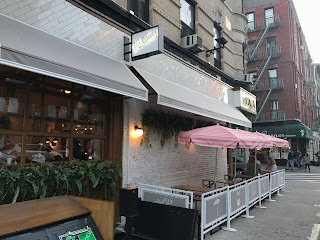 There's some cute tables outside for outdoor seating, too.