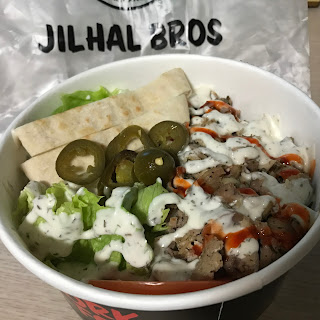 Since I first wrote about Jilhal Bros back in 2015, it has become somewhat of a chain throughout Seoul.


I decided to give it another go, this time at the location in the shopping arcade by Jongak Station/across from Seoul Global Center and Immigration (perfect for a lunch/dinner on the go before or after you go to SGC or immigration). 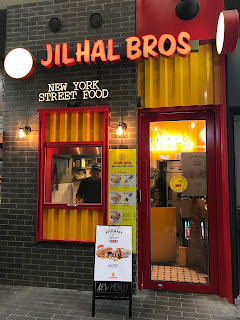 So, this is the exterior of the Jilhal Bros. One thing to note is that this particular location is takeout only! There are no seats in the shop...in fact, there's not really even any room to wait in the shop.

If you are lucky, there are a few tables and chairs throughout the shopping/food arcade.

I wish this place was around back in 2013 when I used to work in the Seoul Global Center. It would have been a perfect place to pick up to-go lunches and bring it back to my company's lunchroom and eat when I didn't have time to pack my lunch.

Since it is a food court-type atmosphere, the food is meant to be portable and is pretty cheap. That being said, the food vendors(?) are all pretty high quality food shops. For example, the premium kimbap shops Kim Seonsaeng and Robot Kimbap both have set up shop and Flying Bowl has a Flying Bowl Express shop if you want to pick up a yummy egg sandwich. 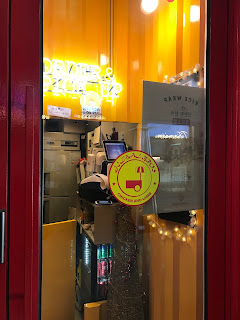 The shop is very small, so even though I was the only customer (I went at a super weird time...like 3:30PM after my immigration appointment) I waited outside for my order to be finished. You can also order at the window during busy times, but since I went at a weird time, I ordered inside the shop. 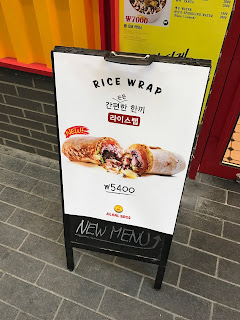 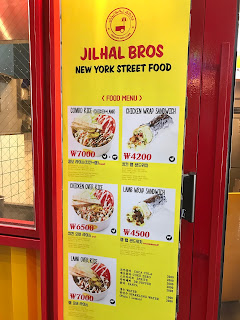 This is the full menu. Since it's an English menu, it's pretty self-explanatory. They just released the "rice wrap" and I was slightly tempted by it, but I just wanted my rice.
As you can see all the menu items are less than 10,000 KRW, so it really is a good price for lunch. 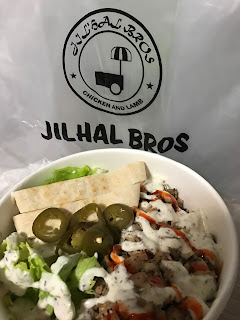 I decided on the Combo Rice (lamb+chicken) - 7000KRW.
I brought it all the way back from the restaurant to my apartment, so let me just say I was amazed by how portable it was. In total, it took about 1 hour door-to-door.

I did get white sauce and red sauce.

The only thing I would say that I didn't like about this visit was that they put the sauce on for me. So, you might want to ask them to give you the sauce on the side if you travel a long distance because it gets kind of soggy(?)...can rice get soggy? Not sure.
Also, they gave me far more white sauce than I would want, which is super surprising to me because I can not get enough white sauce at Halal Guys. But, this was so much that there was a pool of white sauce at the bottom of the bowl when I finished eating.

The rice was still a little off...and I wish I would have known they put jalapenos on it because I would have asked to put those on the side...since they were of the pickled variety.

Unlike at Halal Guys, there are only a couple small strips of pita bread.

Now that Halal Guys is in Seoul, I can see that the competition may be increasing in this particular market. Jilhal Bros is a good alternative if you cannot get to the Halal Guys location and it is cheaper, but it's still not the original. 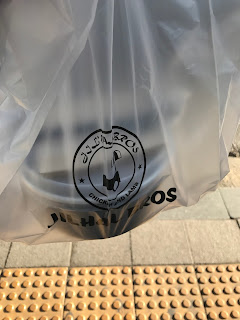