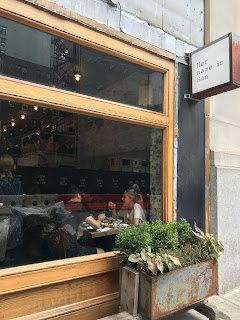 I have been meaning to visit Her Name is Han for a month or so now because I've been seeing it all over Instagram.

Her name is Han is a modern, trendy space serving up Korean "soul food," Seoul food if you will, and cocktails.

The menu has some pretty standard fare, but I was excited when I saw some of the unique salads on the menu (we tried two of them) and the cocktail list is pretty good. They have home infused fruit soju that they use as a base in the cocktails. They also serve a makeolli (rice wine) cocktail.

They do have a few vegetarian options, which is pretty good for a Korean place, even in America, but there are only a FEW items, it's not a vegetarian paradise. 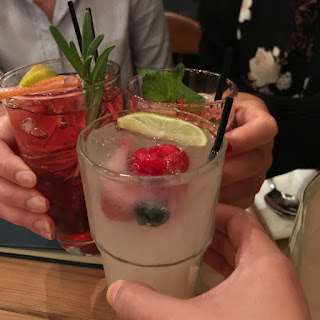 We started with some cocktails ($10-$12).
I got the Lychee Sparkling (soju base) cocktail, my friend got the Berry Milky (makgulli base), and her friend got the Pomegranate Sangria (pear infused sangria base).

All the cocktails we ordered were really well conceived. They were pretty strong. You could definitely taste the different alcohols - if you're not a huge fan of Korean alcohols, then definitely go for the Pomegranate Sangria.

The Berry Milky was quite strong and you could definitely taste the makeolli (or makgulli) flavor.

I was a little worried the Lychee Sparkling was going to be kind of sweet or too syrupy, but luckily it was just right. It was pretty balanced, semi-sweet with lychee flavor, but you could still taste the soju.

Another nice thing about Her Name is Han is that they describe the banchan/side dishes to you when they serve it. So, it's really great if you're not that familiar with Korean food.

Small plates:
We started with A13 - the candied anchovy salad ($11). So, one of my favorite banchans is candied anchovy, so I was super excited when I saw this on the menu.

The salad greens are topped with Korean pear, almonds, candied walnuts and a yuzu vinaigrette dressing. It wasn't overdressed, so that was also a plus.

For our final small plate, we ordered A12 - shrimp and hot peppers Korean pancake ($13). I was kind of iffy about this one. I mean, I really like Korean pancakes (jeon), but this one was just kind of...not that amazing. It was kind of greasy...and was kind of thicker(?) than what I'm used to...and smaller in diameter, too. It was kind of spicy thanks to the green gochus, so beware if you're sensitive to spice. I probably wouldn't order this one again just because I'm pretty sure I could make the same thing at home.

Mains:
We ordered two mains. The first was B1 - fire-grilled bulgogi ($23). This was one of the "must order" dishes, if you took a quick survey of all the tables in the restaurant. I don't really eat that much Korean meat other than chicken dishes, but I can say this one was pretty darn good. This style bulgogi was kind of a "hot" thing a few years ago in Seoul, so I was kind of happy/surprised when I saw it here. It's minced beef, marinated, and formed into a patty of sorts before being grilled. The marinade is sweet and slightly salty. There was a Turkish person in our group and she was even amazed. In fact, she said along the lines of "I'm Turkish and we love our meats and I approve of this and can't get enough." Also, this is not a grill-at-the-table scenario, so you don't have to worry about coming out of the restaurant with your clothing smelling like meat smoke.

One of the members of our group really wanted the mandu/dumplings small plate, so we compromised and got C3 - seafood and mandu hot pot casserole ($35). This hot pot has 5 large dumplings and has huge scallops, prawns, crabs, fish cakes, mussels, clams, and vegetables, including greens, green onions, and pumpkin, and various types of mushrooms.

I think value-wise, going for a hot pot is a good idea, it'd easily serve 2-3, even without small plates, especially if you opt for adding rice (we didn't). I might go back to try the ddukbokki hotpot (C5 - $35) since my friend and I were eyeing that one. 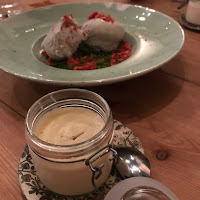 Dessert:
We splurged for dessert...just because we couldn't resist.

The green tea and black sesame ice cream was nice and refreshing, not too sweet. The green tea cookie crumbles were super nice and added a nice texture, especially with the airy, fluffy texture of the dried strawberries.

The makeolli/rice wine tiramisu was nice and creamy. It still really had the makeolli flavor, which I rather enjoyed. It was warm and savory, which I like in a dessert, since it wasn't too sweet.

We had enough food for 4...we were all pretty full, but we didn't over-order.

I am kind of considering trying it again because the lunch/brunch menu is quite famous.
One thing to note, the lunch is CASH ONLY.
For dinner, you can definitely use card! 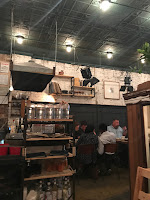 Have you been? What did you order/what did you think?
I have heard from others that they were somewhat disappointed...but I think they tended to order the more mainstream food and the grill/BBQ meat, which I could see being more so-so (esp. since mainstream food is so..mainstream for a reason, so you can definitely get the food for like half the price or make it at home.