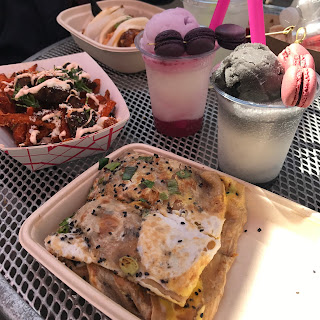 The 2017 Mad. Sq. Eats Fall Market will run from September 2 until September 29.
My friends and I stopped by and checked out a few of the offerings.

Bao by Kaya - they were good, but the chicken one was a miss.
Bankok BAR - Thai iced tea was good and made with real tea.
Jicama NYC - loaded sweet potato fries were good, super filling, but the meat was a little overcooked/dry.

I got Mr. Bing - BBQ Pork (they were sold out of the drunken chicken) and the Onyx lemonade from Renegade Vice Parlour. My friend got the Sapphire lemonade with soju added. 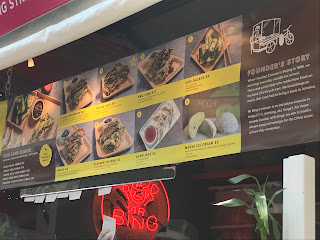 This is the Mr. Bing Menu. I really wanted to try the drunken chicken, but it was sold out that day, so I went with the BBQ Pork. 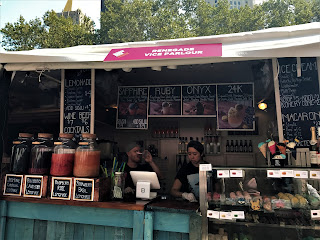 This is the Renegade Vice Parlour menu. I went with the Onyx (no soju added) and my friend went with the Sapphire (soju added). If you're a high roller, they have the 24K made with champagne and edible gold...for $42.

This was a kind of cool concept...Renegade Lemonade partnered with Ice and Vice Ice Cream and with Macaron Parlour to turn out ice cream slushie lemonade topped with macarons. However, each is available for purchase separately. 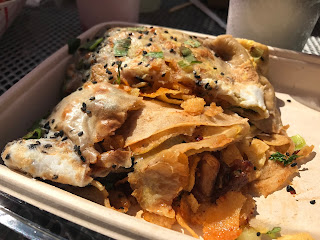 This is the Mr. Bing BBQ Pork. It's a Chinese-style crepe filled with BBQ pork, cilantro, crunchy and crispy wontons, egg, and topped with hoisin sauce, chili sauce, black sesame seeds, and scallions.

I got it medium spicy (they had only three spicy levels: not spicy, medium spicy, and extra spicy). I got a little scared when he said "extra spicy," but I definitely should have gone with extra spicy because medium level had no spicy and barely any kick. My guess is that extra spicy would be about the level of spice of the hot sauce at Chipotle (?). Maybe I'll try it next time...

I did like it enough to go again, but I kind of think it's a little expensive even though it won awards for being the best new "cheap eat." It was filling though, but I guess I'm not quite used to the NYC Asian food prices yet (seriously, my wallet weeps when I eat Korean food outside).

It was SUPER hot and they do make it to order, though, so that's a major plus. 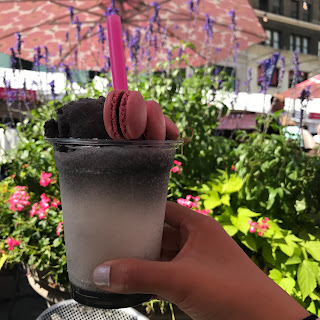 This is the Onyx lemonade slushie from RVP. It is definitely Insta-worthy and Insta-ready. So, if you're in it for the Instagram, it's definitely worth it.

Is it refreshing? Yes? Is it worth the $9 to have a slushie lemonade with some ice cream and macarons? Maybe not. It is a nice treat, though, and is beautiful to look at. So, yeah $9 is a little high, but it's a one-time thing.
It was WAY too sweet for me, especially after the ice cream melted.
I wish I would have read the sign a little more closely, too. I only realized that the macarons were filled with chocolate cream after I ate the first one, which kind of made me sad. Again, this is a special, weird Meredith thing...
I was also a little sad that the color wasn't mixed throughout when I received it...I mean...it didn't match the picture. 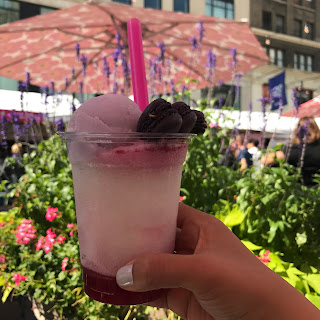 This is my friend's Sapphire drink. She added soju for an extra $5. However, it was not that much soju added...like I know it's American/NYC and hipster prices on soju, but $5 is still a bit much. It was a cool concept, but the fig macarons were a miss for our group.

So, answer - yes, the $9 is worth it if you have a large Instagram following or if colors make you happy.
If not, you might just want to get one of the specialty lemonades...they're $4 each and you can still add soju, if that's your thing.

Location: Across the street from Madison Square Park/Flatiron Plaza.