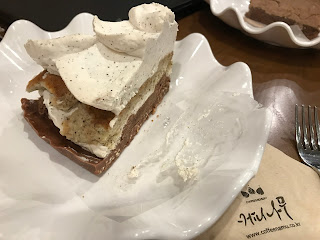 We tried tarts at Coffee Namu (Coffee Tree). (This is a chain, by the way, so you can find it many places! Just look for 커피나무.

My friend and I were trying to get to All That Sweets (check out my previous post), but I had misremembered the closing time, so that was a no go :(

We wandered around the area and had a hankering for some dessert still.  Luckily, in Seoul, crave and it will appear.

We were drawn in by the bakery cases filled with cakes and tartes. There were 15 different cakes to choose from...so, that led to a ton of indecision on my part. 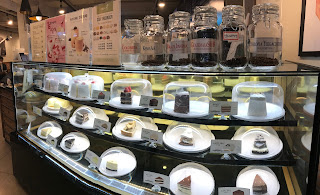 Also, I'm sooooo sorry about how awkward the picture is! It's a panorama because there was no way to take a picture of it all in one frame, but then the area was a little constricted, so I have that weird lump. I was going to fix it and retake it, but then felt too awkward. So, there you go! 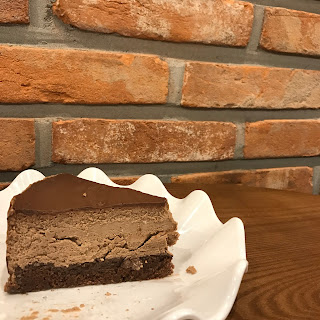 My friend went with the chocolate cheesecake. 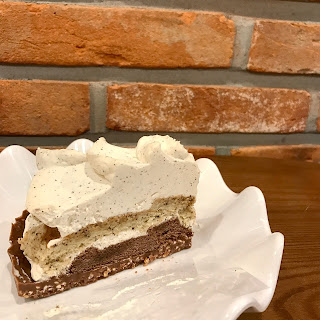 I finally decided on the earl grey tart.

I believe all of the cakes in the case were 5800 KRW per slice, or at least, I know both of ours were.

On a side note, as a native English speaker, saying "earl grey tart" in Korean has got to be one of the worst things ever..it's like eol geu re ae ta reu teu since it's completely Konglishized. That night, I decided to try to do it...like try to actually say "Earl Grey tart" in Korean (I usually just translate it to black tea, which is hong cha by the way), but...nope. So, I had to resort to telling them the "hong cha tareuteu."

The cakes were quite good, actually. I love me a good earl grey tart, which is why I'm always so bummed that it's so difficult to pronounce for me. Unlike some other chains' earl grey tartes, this one had the tea in the cream on top and in the layer of cake in the middle. So, the flavor was really pronounced without being overwhelming.

They also had a black tea chiffon cake, that I made a mental note to try the next time I have the opportunity.

One of my other friends commented on my Instagram post saying that she and her friend also stopped by this exact cafe once, also drawn in by the cake case. She got the same as I got, but her friend got the sweet potato cheesecake (another one that I was considering). To me, the sweet potato cheesecake seemed a little heavy to eat following my big meal, but it's also SUPER Korean, so if you check it out, definitely let me know how it is.

Location:
This particular location, near Namseong Station (line 7) only has seats for about 12 people. It's located in the market area near exit 1. You can walk out straight from exit 1 to the first road. There, turn right and go to the second street and turn left. Walk straight and it should be about halfway down the road before the next street.

I've also been to the Seoul National University Station (line 2) location. This one is much larger. It took over one of my previously favorite cafes (AtPanini) and has a second floor. It's perfect for students at SNU! If you go out exit 1 of SNU station (서울대입구역), go straight and you'll see it on your right. :)