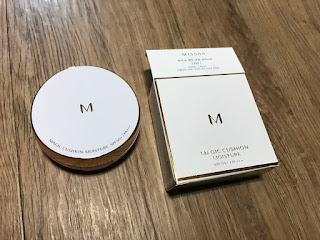 I've been using cushion foundation for a while now. I have been using the Iope Air Cushion
I've switched to the Missha Magic Cushion Moisture since Iope re-worked their formulas and colors and the new colors didn't match me as well as the old version did.

I waited to write this until I had used one entire cushion so that the review would be fair.

The one thing I really like about cushions is that the compacts are refillable. You just pop out the bottom part of the compact that holds the makeup and then you pop the refill pack in (picture below).

The one thing to note if you're used to using other brands' cushions and refilling the compacts. With the Missha Magic Cushion line, you do have to buy the "Air in Puffs" separately. I actually found them for quite cheap on Amazon, like almost the same price as you can buy them in Korea. (SIDE NOTE: Can I just say how cute this Sally LINE FRIENDS puff is? You can have a cutesy item, but hide it under the case. However, if you have no shame in using character items in public, there is an entire LINE FRIENDS SET!)

Also, I, being my cheapskate self, thought it was all marketing...and I was like "I don't need that refill, I'll just get a cheaper one from like Nature Republic or something." I did try the Nature Republic cushion puffs with my Missha compact and...the makeup really didn't go on as nicely with the NR puff. (I don't have a Nature Republic cushion, so I cannot try the converse, just to see if the puff is the reason or if the makeup is formulated specially to go on well with the Air in Puff. 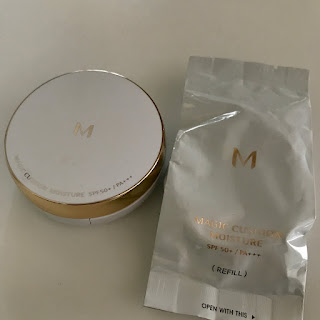 So, this compact was much better for my skin in the winter. Since it is the "Moisture" line, it was a little more moisturizing for my skin than my Iope cushion. However, one thing to note is that the coverage is not quite as good as the Iope brand cushions for my particular color.

Now that it's humid and hot out (hello, summer), the coverage is a big issue for me. It does stay on relatively well, even if I'm sweaty and stuff, but it just seems like it doesn't cover my skin as well now that my skin has its own moisture. 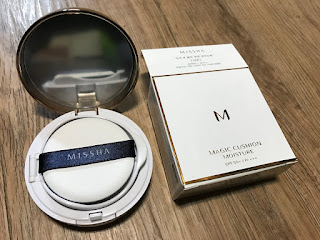 If you're just starting out with cushions and don't know if you really want to invest in a more expensive one like Iope or Hera off the bat, I would recommend the Missha Magic Cushion. Also, if you, like me, like to keep a cushion in your bag for touchups throughout the day, I do think the Missha Magic Cushion line is good. It's color matches me as well as Iope or Hera, but it's cheap enough that I can keep one at work or in my bag and not worry about it getting lost or stolen.

One downside of the Missha line is that it doesn't come in as many colors.

Let me know what you think down below! Since my skin is my skin, my review of the color may not match your opinion.