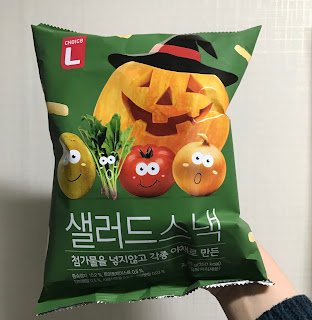 I really like crunching on chips, but I know that it's not exactly the best thing for me to do because of all the additives and oils, etc. and also not the best for my wallet at the same time.

So, I'm always on the lookout for alternatives.

I was in Lotte Super to make my weekly natto purchase and had a craving, but they didn't have a good offer for any of my usual go-to snacks.

I saw this was a new flavor, so I decided to go for it. Like all the other Choice L snacks, they're 990 KRW per pack, so my wallet was happy.

And, even though it may seem like I bought these snacks around Halloween, I promise this isn't the case...they just have a jack o'lantern on the packaging for some unknown reason. 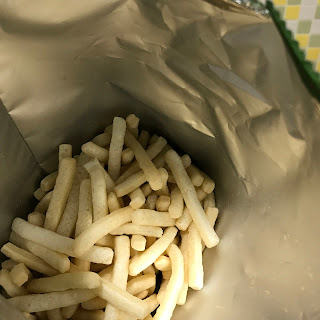 The labeling promises that there are no additives in the pack, so that's great.
I was somewhat impressed by how many were in the bag....sometimes when you pay less, you get less, which makes it a not great deal, ya know?

Anyway, this is how many sticks were in the bag as soon as I opened it and they were all pretty much intact...not all crumbs or crushed, which was kind of good, too.

This snack isn't very salty, which is kind of a disappointment for me, but also isn't sweet like Korean snacks tend to be. So, it's a definite possibility for my future snack purchases.

It actually kind of does taste like vegetables? However, I was kind of expecting that the sticks themselves would be devoted to a single vegetable...you know like veggie chips usually are?

Instead, this is just like the regular potato sticks, but with dehydrated vegetable flakes on them.

I am also quite aware that they aren't really healthier for me, but variety in my snacks is kind of good for my mental health 😅