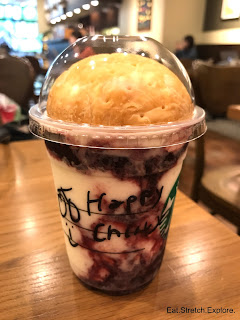 While America had its Unicorn Frappuccino, Japan has the American Cherry Pie Frappuccino.
I saw advertisements for it as I was traveling around and was slightly intrigued by it. It is kind of expensive, 640 JPY + tax, and is only available in tall size. 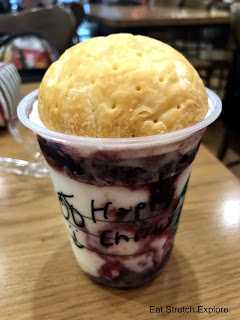 I honestly would have preferred the opportunity to purchase it in short size because it's such a unique flavor. Also, if you've never been to Starbucks in Japan, just FYI, you can purchase beverages in a short size, which unique to Japan, I think.

Yes, that's a pie crust dome on the top. Yes, it's flaky and buttery. What you don't see is that under the dome is a mountain of whipped cream.

The Cherry Pie Frappuccino itself is quite difficult to eat. Even if you follow the instructions below, the whipped cream makes it super messy. 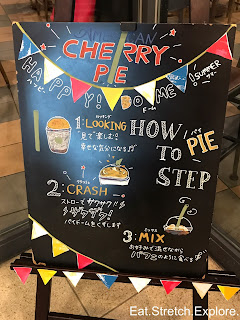 The cherry part of the cherry pie is made with a generous helping of cherry compote. The rest is a vanilla cream flavored beverage.

I gave myself ample time to finish this beverage. This is not a Frappuccino you can easily walk and drink. You have to really break the pie crust...like it takes some actual force.

At first, I was not a fan of the flavor. However, after I let it melt and mix together, the flavors also came together. It's kind of like a cherry cream drink, but not overly creamy like a cherry shake would be.

It was also kind of good once the crust became soggy (?). However, if you drink it while the crust is still flaky, it's still quite good. I like the texture dimension the crust added to the drink. It is SUPER sugary...like it's not shocking it is sugary given the fact that it's pie-flavored. Even though it was super sugary, it was not super cloyingly sweet, either. 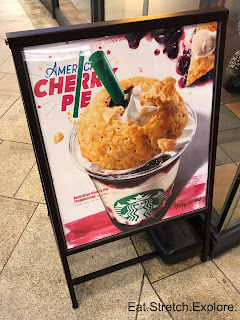 All in all, it was a good one-time experience for the novelty aspect. I, however, wouldn't order it again. I only ordered it because of the novelty and because I was on vacation. 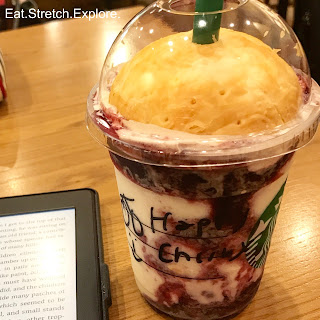