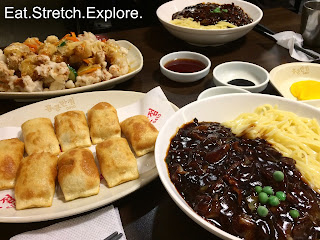 I've been craving Korean Chinese food for a while now. Had to go to me and my friend's standby restaurant, Hong Kong Ban Jeom for some jjajangmyun, tangsuyuk, and fried mandu.

This chain is all over the place in Korea.

The particular location we went to was the one right outside Sadang station, exit 4.
It's in the basement, so just look for the red sign that says 홍콩반점.

My friend and I have been to a particularly bad location - the one in Insadong. But, if you're in Insadong, I kind of suspect you're not going to be looking to eat Chinese food. We got major stomach distress after eating there...something just tasted a little off.

Anyway, this one is pretty clean and isn't pre-pay. Some of the locations are pre-pay, so look out for that! They may say it is sun bool (선불), so make sure you have easy access to your cash or card.

We kind of had eyes bigger than our stomachs, or however that saying goes, when we ordered all this food. We were just two people...

We ordered 2 jjangmyuns, 1 full order of mandu (there's a half order of only 4 mandu), and a tangsuyuk.

If you do not eat pork, you should probably avoid this restaurant (and many of the other Chinese restaurants, for that matter). There is pork in the black bean sauce, in the mandu filling, and, of course, in the tangsuyuk.

The jjamppong does not have pork in it, but it has seafood like mussels, squid, etc. So, just as a forewarning if you follow some religious dietary restrictions.

They do have sweet and sour fried chicken - called kkan-poong-gi and the Chinese yeast rolls - kkot ppang.
If you prefer rice, you can order the jjajangbap, where the black bean sauce is put over rice instead of noodles. Or, the jjamppong bap - instead of noodles, you get rice for your red spicy seafood dish.

I am not sure if they do the half and half option here, where you can get half of a serving of the jjajangmyun and a half serving of jjamppong.

All in all, I think the total came to about 12,000 KRW per person for all this food and they do not offer set menus. You can get the