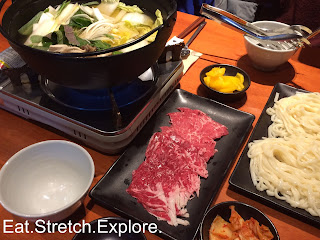 The other day my friend and I went to 제일제면소, it's a chain noodle restaurant operated by CJ Company.


The Korean name Cheiljemyeonso did not live up to expectations. Maybe it was the particular branch we visited, but we were very underwhelmed.

We both wanted some shabu shabu (샤브샤브) because it was cold outside. We were around Seoul Station, so the opinions were quite limited.

The first place we tried to go to had a huge wait (토끼정), so we wandered around a bit and found this place.

It's CJ brand, so you can use your CJ One point card, which was about the only positive thing I had to say about this meal.

The beef was really frozen, like really frozen, as in we tried to melt it by placing it near the flame and all the slides continued to stick together in one slab, so we just gave up.

The picture made it seem like we would get a ton more vegetables. Honestly, that's my favorite part of any shabu shabu meal, but this one was so disappointing. We barely got any vegetables and mushrooms. 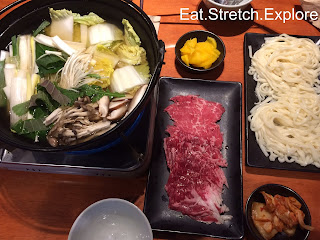 They give you some "spicy" sauce. It's definitely not spicy. My friend can't really handle spice well, so we were quite conservative at first adding it to the broth. We ended up adding ALL of the spice because the broth had no taste.

The noodles were fine, but could definitely have been served better with a tastier broth.

So, after this, we were still hungry, so we went to KFC and shared a meal. We both commented on the fact that we wished we had started our evening out at KFC instead of wasting our hard-earned money at the noodle restaurant.

Everyone else in the restaurant had gotten their own soups with noodles, so maybe those are better? What are your thoughts about this place?