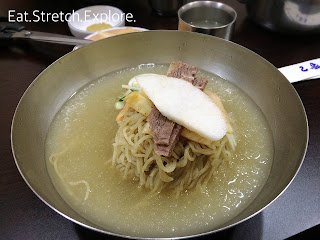 My friend and I met up after work for some Pyeongyang-style naengmyun in Gangnam at Eulmildae 을밀대  (another location in Mapo).


It is now definite naengmyun (cold noodles - naeng = cold, myun = noodles) season in Korea and it has been for quite some time.

If you want to check out something a little different from your typical naengmyun, I recommend checking out some of the Pyeongyang-style noodle houses around Seoul.

These places sell noodles and flavors that are in the North Korean style.

South Korean naengmyun is usually very salty and kind of has a pickled/vinegary taste. 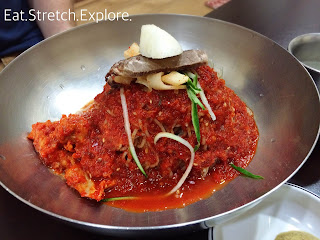 North Korean naengmyun is a little different, although still salty, it is not hit your face salty, it's a semi-light combination beef and water radish broth. Hence, there's sometimes even a kind of cucumber-y fresh/light/cool flavor going on. It's a little sweeter than typical South Korean naengmyun.

My friend decided to order the hwae naengmyun. It is topped with some raw fish, the spicy sauce, a couple of strips of beef, and some radish slices.

Menu translations:
The beef used in the menu items is all Korean hanwoo beef, so it is high quality beef, hence the slightly higher prices. 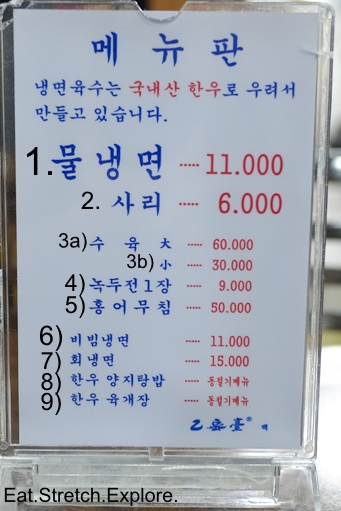 I do recommend you trying the mool naengmyun! It is what this restaurant is known for, otherwise my friend was happy with his hwae naengmyun. Others around us had the nokdu jeon, which looked pretty good, not too greasy, and the soo yuk. I think in order to properly eat soo yuk, you need more than 2 people in your party.

Gangnam Station: Go out exit 4 and walk straight to the first street. You'll see a sign for Blooming Garden. Take a left and walk straight. You'll get to a office building with a Holly's Coffee and a post office. Go in that building. You'll want to walk to the back of the building and to the left corner.

I forgot to take a picture of the entrance, but there is a large entrance with some wooden signs with Chinese characters.

Address in case you get a little turned around:
강남구 테헤란로4길 46쌍용플래티넘밸류 B-147