Posted by Meredith on July 31, 2016
Hi, thought I'd update you on what my friend and I did on our trip to Taiwan.
We had a 3 nights, 4 days "free tour" package from a Korean travel agency.

I'll post more with pictures later! So, check back!

MAKE SURE YOU BRING CASH! It's very rare to find places that take card.

I failed and ALSO forgot my American debit card and I never set up my Korean bank card to be used abroad. So, I had to be very frugal. I also only had an American Express card, thanks Delta for the most useless credit card on the planet (American Express isn't accepted very many places in Taipei).

10:50 AM Jeju Air flight from Incheon Airport to Taipei
(I'll have a more detailed post later about Jeju Air later, but our flights were both delayed 20-30 minutes.)
12:40 PM Arrival at Taoyuan Airport (Taipei)

Took the 1819 bus from the airport to Taipei Main Station
Travel time about 50 minutes. This includes a free transfer to Ximending station, where our hotel is located.

After you get off the 1819 bus, you can do a free transfer to Ximen/Ximending using the ticket stub from the 1819 but, but honestly, it was probably a waste of time. The bus is only once every 30 minutes, so if you miss the bus, you'll wait a long time. The subway is only one stop and costs about 20 NTD (about 0.60 USD).


If you do want to take the bus, you have to walk to the West Bus Station, so walk through Taipei Main Station and go out the west doors, then cross the street and keep walking. You'll come to the bus station where you can pick up the 1819  bus back to the airport, but you'll want to keep walking through that building and then find the building where you can take buses to other parts of Taiwan. Then, on the left hand side, there will be a bus stop for Ximen there. There isn't an English sign, so you'll have to make sure you memorize the Chinese characters for Ximen (西門町).

We ended up arriving at our hotel around 4 or so.
Then, the trip really started. (I'll post more later with pics.)

Started off at Din Tai Fung, the original store. We took the bus because it was a very simple route, just took 7 stops from Ximen to Dongmen station.
Luckily, we waited only 25 minutes! We had arrived at about 5, but if we were even 20 minutes later, the wait time would have been 50-60 minutes.

After our lunch/dinner, we walked around Yong Kang Street. It's a cute little area filled with cafes, restaurants, and little stores.

Then, we got the famous scallion/green onion pancakes on the end of Yong Kang Street. You'll definitely be able to spot this place because of the long line. It's definitely worth the wait! (I'll also update with some pics so you can make sure you get the right place!) It's across the street from Smoothie House :)

Then, we walked around a little more, just doing some exploring. Then, made plans to do another one of the hard hitters the first day! We had been talking about getting the original bubble tea for the whole time and it was definitely on our itinerary. PLUS, on the bus, I saw we were only 2 stops from the CSK Memorial Hall/National Theatre area, which is where the bubble tea is!

Although tempted by the Coco, we rushed back to get the original bubble tea before closing. They close at 8:50 btw.

We made it to Chun Shui Tang! We had just about one hour before they closed! It was so worth it!
Then, after we had to leave at closing time, we walked around a bit and took a look at the grounds at night. HIGHLY RECOMMEND THIS! The buildings are so grand in the day time, but the aesthetic is so different at night and also as grand!

We took the bus back to Ximen and then walked around a bit and did some shopping.

We stopped at Sasa, which is a really great place to shop for cosmetics/beauty supplies. However, I found the prices in Taiwan to be about on par with Olive Young at sale time. It was more expensive than what I remembered the prices to be in Hong Kong.

Then, we decided we wanted to get vacation cocktails, so we headed over behind The Red House and went to Cafe Dalida for some mojitos.

We decided to get breakfast at the hotel (it's included). It's a pretty decent spread, lots of Chinese/Asian foods, including noodles, rice, vegetables, salads, breads, etc.

We then decided to do a daytrip to Jiufen from Taipei. It's about 1 hours away.

We went to Taipei Main Station, then changed to the local train to Ruifeng station. This was the most confusing ticket buying process ever. Unless you can read Chinese, I recommend you just get in line right away at the ticket window! It would have saved us so much time! The ticket is 49 NTD (about $1.50 USD)

Right away when we arrived, we really needed food. So, take the exit that mentions Jiufen. I highly recommend walking straight to the end of the street. There's a food hall. We walked around and found what we wanted to get. Also, there's a pretty famous black pepper beef bun near the entrance. Make sure to pick up one!

It was forecasted to be about 40 degrees C, so I advocated quite strongly for a taxi tour once we got to Ruifeng station. Doing the recommended public bus tour in my tour book seemed like it would have been miserable.

We opted for Option A (More later...with translations of all the options and pics).
Ruifeng Train Station to Nanya Rock to Yinyang Sea to Jinguashi 13 Ruins to Golden Waterfall and ending at Jiufen Old Street.

The taxi tour was so great and so worth it. It's 1200 NTD (as of July 2016), so that's about 40 USD. I'm sure you can take the bus, but it is so much more convenient in the taxi. Also, I guess some people walk it, but it's a pretty dangerous, narrow, twisty street up a pretty steep mountain. So, it looked so dangerous whenever we saw anyone on the street. Also, it's pretty hard to get a taxi along the way, so you're committed to whatever you choose.

We walked around the street, had a disappointing Peanut Ice Cream Wrap (don't go for the first one!!! THE ORIGINAL ONE IS THE SECOND ONE YOU'LL COME ACROSS).

Then, we just ventured around, but nothing was really catching our eyes.

We decided to stop for a tea break. We ended up going to A-Mei Teahouse and got the Oolong Tea (hot). It's actually the teahouse that inspired Spirited Away, so says my guidebook...I know nothing about Japanese animations.

Then, we decided to just head back to Taipei. We were also toying with the idea of going to Pingxi, since we are so close, but it was just pretty hot. Regretting the decision a little, but we were only in Taiwan such a short time.

We took the bus back directly to Taipei rather than the train. It's a little more expensive, but was still only 120 NTD (about 4USD)

We then decided to go to the Taiwanese Beef Noodles...one of the most famous ones. Definitely MUST EAT Taiwanese beef noodles while you're in Taiwan. We went to Wang Yuen Beef Noodles, very close to Ximen station.

Then, we went back to the hotel a bit to change and then went to Shilin Night Market, just because it's one of those MUST DO things. We went a bit later than regular eating time, so many of the food stalls didn't appear to have very fresh food. We did end up getting another black pepper beef bun and I got my frog's eggs drink.

We then went back to Ximen and then decided to just get a Hot Star Chicken and some sweet potato fries and some Taiwanese beers and enjoyed them back at the hotel.

We got a bit later start than we had anticipated. It was another SUPER hot day...as to be expected. I was just trying to avoid being at CSK Memorial at like peak sun hours.

We started off the day with Taiwanese breakfast at Fu Hang Dou Jiang. We got the warm soy milk, the fried doughnut, and the egg sandwich.

Then, we took the bus back to CSK Memorial. We walked around in the museum to cool off a bit and we learned a very brief amount of Taiwanese history. We also happened to be there at the 1PM changing of the guard ceremony. It's about 15-20 minutes long. So, if you're sensitive to the heat, I really recommend you plan accordingly and drink a ton of water. So many people were not looking so good at about minute 8 of the ceremony.

Then, we did some souvenir shopping at the CSK Memorial Hall (more later). These are a little more expensive, but they did take credit card (NO AMEX), so no choice.

We then went back to the hotel.

My friend went to Fonda Coffee. I went there 3 years ago, so I can update later with some information and pictures later.

I then got my Coco Milk Tea (3 Gems, of course) and then also got a bread.

We went out again to Yong Kang Street to meet my friend's friend. We went into a cute cafe called 'Ecole Cafe.

We then sped to Taipei 101 and the ATT 4 Fun shopping center for my Mocktail Ice Cream.

Then, we met my friend's other friend at a Taiwanese beer house. (I forgot to take pictures...sorry). Everyone referred to it as "Taiwanese tapas" and that's semi-true, but also semi-false. The items are kind of small plates, but not as small as many tapas, so it is semi-difficult to get a taste of a large variety of plates. We ended up getting stinky tofu (finally, my stink tofu), black pepper beef, and a fried rice.

They did have an English menu, but it's definitely useful to have someone who can read Chinese and order properly.

Then, we went off to Ounce Taipei, which is one of the speakeasy-style bars in Taipei. We each had a couple nice cocktails (more later), then went back to our hotel.

We decided to get my sea salt coffee at 85C, more on that later, but highly recommend that!

This barely counts as a day. Our flight was at about 1PM, so we should arrive at the airport around 11AM.

We actually left about 9:00, but we highly overestimated travel time. We ended up getting to the airport at like 10AM, so we weren't even able to check in.

That ended up being okay, so we ended up eating lunch (or brunch?) at the food court.

Items I didn't have time to eat this time around: mango shaved ice (so sad about this one), pineapple bun, the REAL peanut ice cream wrap (so, SO sad because we were SO close), stinky tofu at night market (semi-sad. I could have bought it, but it's so much food to eat alone). 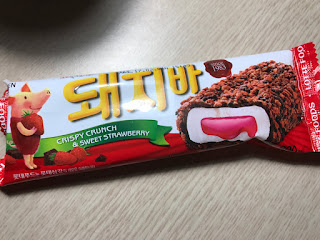