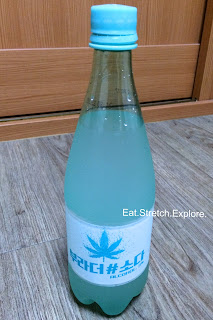 부라더#소다 is a carbonated soju soda (3% alcohol) that has been appearing at Korean convenience stores as of late.

For the past few weeks, I have been seeing pictures of this popping up on social media and found it at the CU next to my house when I went there to buy my chips (BTW, potato chips are 2+1 at CU until the end of the month, so you get 3 bags for 3000KRW.)

I decided to start writing some information about new snacks and convenience store products I have been finding these days...hope it doesn't get too annoying.

Apart from it being soda-like alcohol, I had no idea what it was when I bought it, so I went into drinking it blind.

It comes as the newest addition to the influx/fad of flavored sojus.

You may also notice I decided after partially opening it that I wanted to write a post about it...but it's not completely full when you buy the bottle. At the time of the picture, I had just opened it about halfway.

Since I was completely uninformed about it, I kind of assumed the liquid would be blueish. That was surprise number one. It was kind of just a cloudy/clearish color (I forgot to take a picture, sorry).

The taste: This was surprise number 2. It tastes like bubble gum...which is really, really not my style.
The carbonation is light, which is nice, but the flavor was just a big no for me.

It really has no alcohol flavor or soju flavor for that matter. It will be great for people who like a sweet light flavor and aren't looking to get drunk.

Like all of the other flavored soju, it really isn't my thing. I'll pass on it next time...aka there will not be a next time for me.