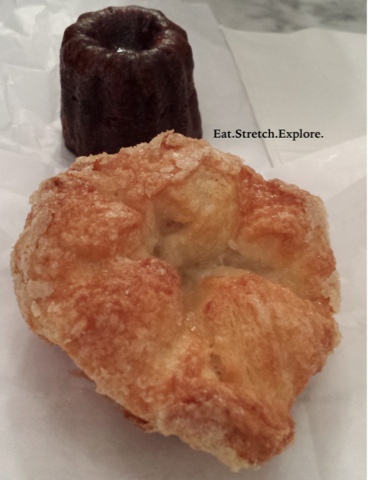 Dominique Ansel Bakery received a ton of publicity a couple of years ago because of its creation, the cronut.

I have still failed to get one...well, actually I've never tried, so is that a failure?

My friends and I went with his long-standing popular creations - the DKA and the cannele. 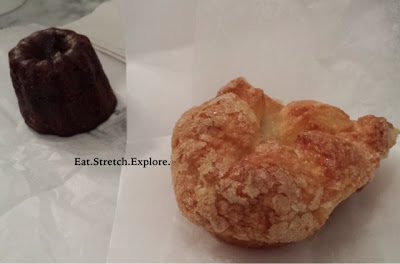 We arrived right before closing, so it was kind of slim pickings. We were able to get what we wanted, though. I was slightly tempted to get a madeline, but my friend recommended getting the DKA instead.

DKA: $5.25
The DKA is "Dominique's Kouign Amann." It is kind of like a croissant covered in sugar. Even though we arrived late, the DKA was pretty flaky, fluffy, and moist.  It was sweet, but not overly sweet like doughnuts. 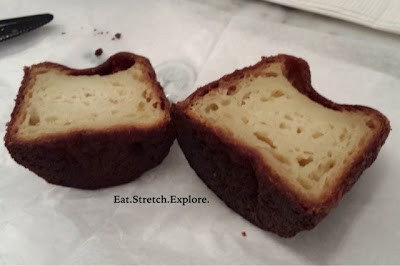 CANNELE: ($3)
The Cannele de Boudeaux is crispy on the outside, but very moist on the inside. The outside is caramelized and inside was soft, but quite dense and eggy (think like custard). I was kind of surprised by how dense it was, especially in contrast to the flaky, fluffy DKA.

COFFEE: $2 (small)
We each also ordered a coffee. The coffee is actually quite cheap and isn't too bad.

CRONUT: ($5)
In case you have been living under a rock or something, a cronut is a croissant-doughnut hybrid. I thought after I got back from Japan/Korea last January the hype would have worn down and I would be able to get a cronut without any problems. Boy, was I wrong. My friends were telling me about their visiting friends waiting in the line for hours. Not my thing. I like sleeping.
There are different cronut flavors each month.
You can pre-order the cronut online, but even then you are kind of in a line. You can only preorder it on Monday at 11AM astern time. You can order up to 6 cronuts if you are able to get in the preorders. You have to order it TWO WEEKS prior to the week you want to pick it up.
Check it out here: http://dominiqueansel.com/cronut-101/

COOKIE SHOT: ($4)
I have tried the cookie shot. I will review it soon! It is available daily at 3PM, so most people line up around 1:30 or so, I guess.
It's his other creation that has recently become a new food fad, with daily line.

ATMOSPHERE:Since we went late in the day, there were maybe 3 others in the shop, which was nice since the workers did not seem to be harried. There are seats available indoors and also some outdoor seating. Otherwise, it is kind of sparsely decorated.
There are also soups and sandwiches to be had at lunch, so maybe check it out if pastries are not totally your thing.
My friend recommended the frozen s'mores, which seems to be a great concept. It is a marshmallow wrapped around vanilla ice cream with chocolate wafers. They serve it on a wooden stick and they scorch the marshmallow to order.
Dominique Ansel Bakery also has monthly specials, flavors and types of pastries.

If you want to try to make the DKA, hot chocolate, or other of his unique pastries, check out his cookbook. It's now available on Amazon.