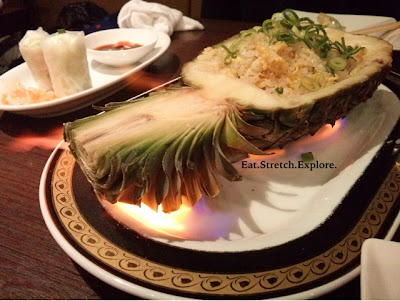 We went to Chao Sai Gon in MINT Kobe at Sannomiya station for dinner.

We waited about 10-15 minutes for a table. While we were waiting, we looked over the menu and choose some goodies. We were both pleasantly surprised about how relatively inexpensive the food was (compared to other Vietnamese restaurants and other dinner in Japan). The price is still higher than I am accustomed to paying for Vietnamese food.

If you, like me, are not skilled at reading Japanese, they have pictures next to each menu item. It my, however, be a little difficult to order the set menu if you do not speak/read Japanese. 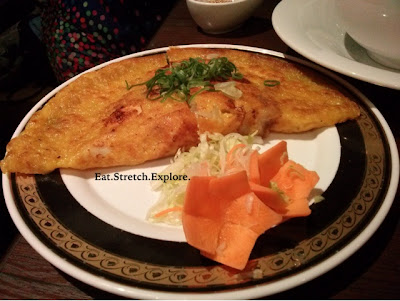 The Vietnamese okonomiyaki was interesting (1080JPY, about 11USD). It was a very thin egg omelet, filled with vegetables like bean sprouts and herbs. I would probably characterize it as a crepe rather than okonomiyaki, however. It was fried, so it was slightly greasy, but not overwhelmingly so.

The shrimp spring rolls were very light and fresh (290JPY, about 3USD). You are served two spring rolls and some delicious dipping sauce. 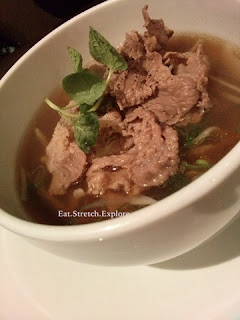 The beef broth was light, but satisfying. It was served hot. It was not the best pho we have ever had, but it was pretty good. My friend approved of it, saying that it was probably the best pho she has had in Japan (she's Japanese).

The pineapple fried rice was good, really fresh and light. Additionally, there was a crazy visual display. They serve it to your table while the with the pineapple flaming beneath the rice. The sad part about this is you do not get to eat the pineapple after finishing the rice. I felt bad about wasting that half of the pineapple. Usually, when I order this, the restaurant slices up the pineapple for you to eat as dessert, but I guess they do not do that here. 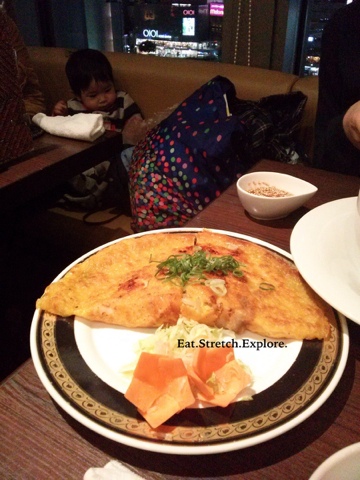 We ended up eating much more than we would have if we had each ordered the set menu and for a little bit less than the cost of the set menu, we paid just under 3000JPY (30USD).

The atmosphere of the restaurant is very cute. It is decorated like a café in Vietnam. There is also an open kitchen/bar design, so you can watch then prepare your food if you wish. Outside the restaurant, there are also some seats. You can also ask to sit near the window. There, you can have a great view of the Sannomiya area.

They also had a dessert menu and drink menu. Some others in the restaurant ordered desserts and they looked quite nice and fresh. The Vietnamese coffee also looked great.

I would recommend this place if you are looking for some cheap, ethnic food in the Kobe/Sannomiya area.

They also offer a discount if you use this special Japanese app/website. It's the Japanese version of Yelp, but I am not sure what it is called, sorry!