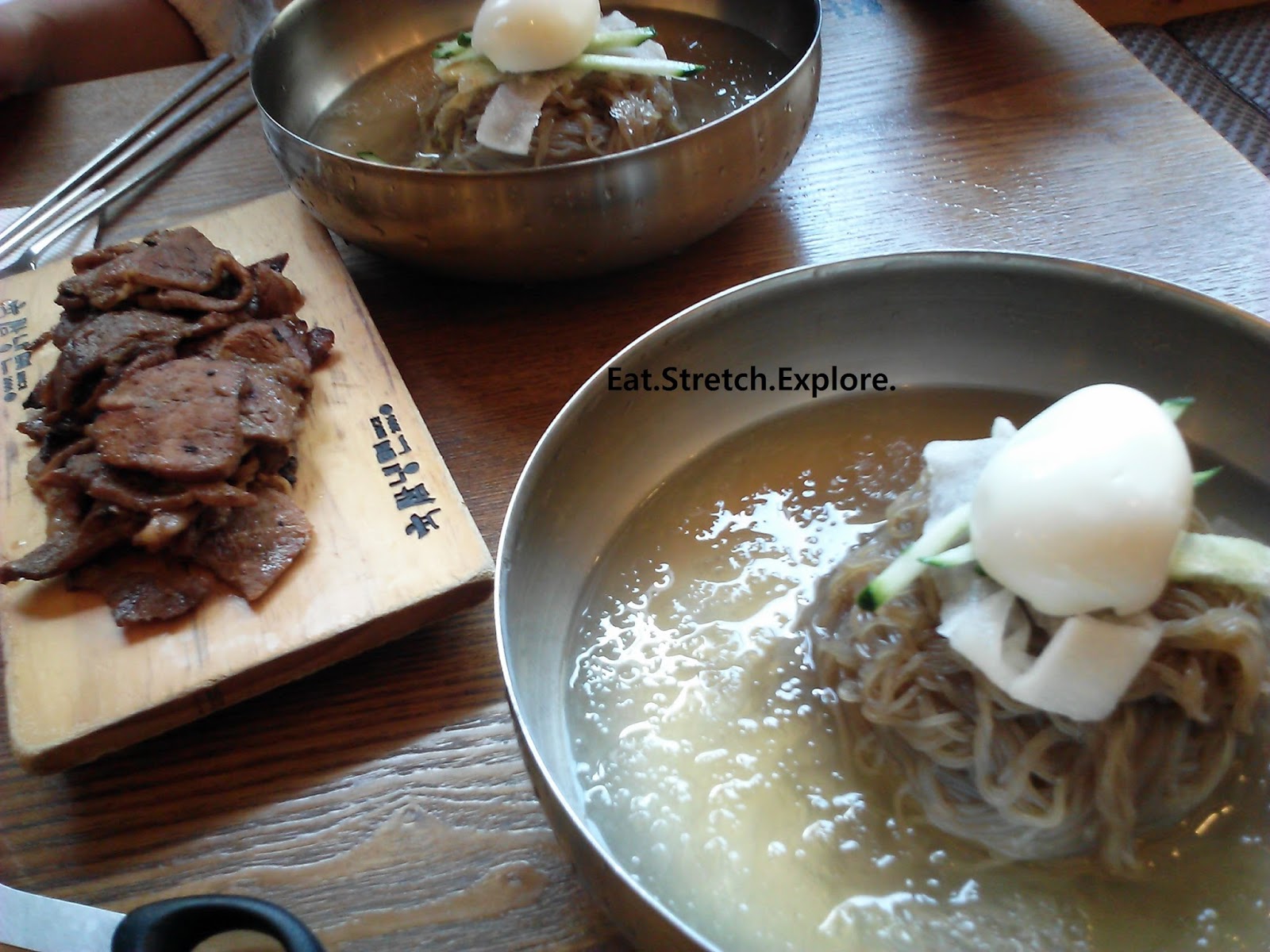 Yukssam naengmyun is one of the cheapest places to eat in Seoul when you're craving cold noodles (naengmyeon)!

The restaurant I am introducing today is a fast service naengmyun (cold noodles) eatery.

There are only like four options on the menu, but the great thing is that the each order comes with a board of charcoal-grilled meat. That's this restaurant's claim to fame - it's known as 육쌈냉면 숯불고기 주는 냉면집 in its full name. That translates roughly to the naengmyun restaurant that gives you charcoal bulgogi.

On hot days, I prefer to order moolnaengmyun (물냉면) - pictured above. The noodles are topped with sliced cucumbers, a hardboiled egg, and some strips of Korean pear.

Bimbim naengmyun doesn't have the water/soup with ice part. It is just the buckwheat noodles with the Korean red paste. The soup is served on the side. To eat it, you should mix the noodles and the sauce and then pour some of the broth in the bowl.

You typically add vinegar and mustard to the bowl before eating, but that is up to your personal preference. The soup broth here is beef and Korean radish/pear broth. It's pretty good, not the best I've ever had, but better than the broth found at some other places that are even cheaper (like kimbap cheonguk).

It is also sometimes refreshing to drink the broth separately. I like doing that if the broth is really good flavored and not too watery.

What I ordered is 육쌈냉면+고기 (You can choose between mool 물 or bibim 비빔). It costs 6,000KRW (about $6USD).
The meat is great. It's charcoal-grilled and marinated.
The broth/soup for the 물냉 is really refreshing and comes with some crushed ice.

They also sell mandu (Korean dumplings) and bibimbap, but I would recommend just sticking with their claim to fame.

The original store is near Sillim station (line 2), if you really enjoy going to original stores. I don't know, some people are really into that.

Otherwise, I'm sure you'll be able to find a store anywhere you happen to be. Just search for 육쌈냉면 on your favorite map app.

FYI, the water is self-serve typically.