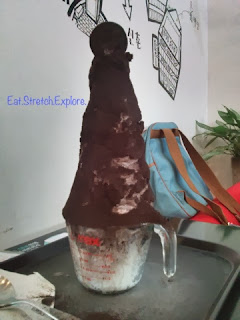 Pop Container in Edae and Sinchon (by Yonsei and Ewha University) has a crazy tower of a bingsu!

So, I really really love bingsu. I was really eyeing this Oreo bingsu for weeks.

One day, finally, I got my ex-coworker from research lab to go with me!
I was actually kind of worried about trying this bingsu. There is a tendency for stuff to be very visually appealing in Korea, but actually not taste that good and be a major letdown.

This was not the case with this ginormous Oreo bingsu from Pop Container located in between Ewha and Sinchon.

When I say ginormous, I am not being overly dramatic. This thing was about, my our estimations, 50 cm (20 inches) tall. HUGE!

The Oreo bingsu is 13,000KRW. It is listed as a 2 person serving, but I am pretty sure that is a ridiculous claim. I have had this twice and both times we didn't come close to finishing it and I hate not finishing food because I feel guilty wasting it.

And...we totally only had two people eating it. And...we definitely ate dinner right before this...and I had also definitely eaten buffet for lunch. Please don't think I'm a huge pig. The buffet was at Ashley's and I hate Ashley's...seriously my hatred for Ashley's is so strong...but I had to go because it was an event for an organization I am pretty active in.

Actually, I have had this twice. Each time, only two people eating it. Both times, there was no way we would ever finish.

Anyway, the "tower" part of the bingsu, for lack of a better term, is actually ice cream covered in Oreo dust. I mean covered in it. There is no way to eat it without making a mess. As soon they deliver the bingsu to your table, thank goodness they deliver it...I doubt I would be able to carry that beast, the ice cream starts melting. Rivers of the ice cream and Oreo powder begin flowing down the sides of the tower. 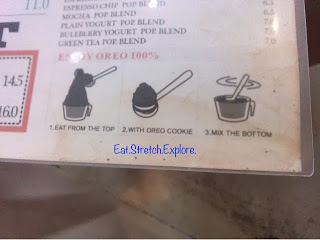 Luckily they provide you instructions about how to eat the bingsu. You should start from the top. And, even after following these instructions, you will still make a huge mess. I do not envy the kitchen staff.

When you finally get to the part in the measuring cup, I mean if you do, that is where the bingsu starts. There is shaved ice and there is this sweet cream in the center of the ice part. This is to mimic the cream center of the Oreo. It was very surprising the first time I ate it because I was totally not expecting it and thought that the bingsu flavoring would come just from the melted Oreo ice cream.

Honestly, by the time we got to this part of the bingsu, we were pretty stuffed, but we tried our best to follow the eating instructions.

If Oreo bingsu is not your thing, I heard that the pancakes here are pretty good, but pancakes are really not my thing, so I have never tried it. When I went, they were still saying that the Tim Tam bingsu is coming. I'm pretty sure the idea is about the same as the Oreo one, but the flavor will be Tim Tam instead of chocolate Oreo. I kind of want to try it...or, rather, really want to try it, but currently, I am stuck in Japan.

The atmosphere is very modern. They have these crazy beanbag chairs...they aren't even beanbag chairs, but more like beanbag recliners (?). Be careful though, I guess people can get stuck in them...*cough my coworker cough*

Directions: go to the main street connecting Sinchon and Ewha areas...go right out of the UPlex exit of Sinchon station. It is on the second floor. You will see an orange shipping container-esque facade. If you walk to the T-intersection with the Starbucks, you have gone too far.

You will probably have to wait a little to get in, especially if you go right after dinner.

Good luck finishing it! If you finish it, let me know how it was! I want to hear about the full experience!