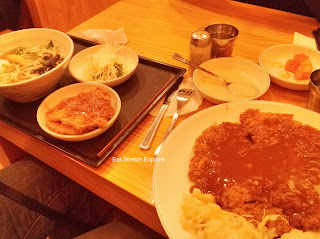 While my parents were visiting me in Seoul in October, we went to a few places that were not included on the itinerary I made for their trip (click here to take a look!).

One day, they were getting sick of eating Korean food and wanted something "light," so obviously I took them to the famous dongatsu restaurant in Myungdong. Because, you know, what's a lighter meal than a slab of fried pork bigger than your face? Well, at least we got Japanese food and not Korean?

It was recommended that I take my parents to this particular store by a friend AND I was having a hankering for some donkatsu before I moved to Japan. Logical, right?

So, we walked from our hotel near City Hall. I will provide walking directions soon for getting around central Seoul on foot since I think it's useful to know. You can save money and time sometimes since many times you have to transfer trains (from City Hall to Gyungbok Palace, for instance). 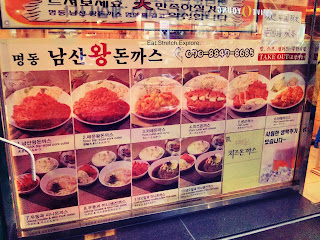 The restaurant is very easy to find. Go out exit 5 of the Euljiro-1-ga station (line 2) - the exit with the California Pizza Kitchen - and walk straight. You will walk past a Smoothie King and the Metro Hotel on your left. Then there is a block of restaurants in between you and The Coffee Bean and Tea Leaf. The restaurant is located in that strop of restaurants, across from the Olive Young.

Honestly, I have walked past this restaurant many times and I have never tried it. You will be greeted by this picture menu of the offerings of this restaurant.

We researched the menu choices before going since we were all pretty hungry before we left the hotel. My dad decided on the spicy big-sized pork cutlet (2) (매운왕돈까스) because he really likes spicy food. I selected the original Nam San Big-sized pork cutlet (1) (남산왕돈까스) and my mom selected the udong noodle and mini pork cutlet set (7). I decided on the original, just because it's my first time at the restaurant and I like ordering what the restaurant is well-known for the first go around, but I was strongly considering the fish cutlet (5) (생선까스).

As you can see on the picture menu, apologies if the words are not very clear, but they also offered some fusion options, too - curry donkatsu (3), cheese donkatsu (4), curry rice (6), and spicy cheese donkatsu (11). They also had other set options - 8. udon noodles and a mini fish cutlet, 9. cold buckwheat noodles and a mini pork donkatsu, and 10. cold buckwheat noodles with a mini fish cutlet. The food ranges in price from 7,000KRW ~ 9,000KRW.

For your information,  rice, soup, and salad are offered with unlimited refills. You can also do take-out.

They require that you order one menu item per adult and you can take leftovers home, if you want. Honestly, though, I don't think a leftover fried pork cutlet sounds at all appealing.

The cutlet was definitely bigger than my face. There's a picture of it compared to my face, but I will leave that one off of this blog.

Along with the rice and cabbage salad on your plate, they bring a cream soup to start, kimchi, and some macaroni salad. The macaroni salad with corn and mayonnaise for which Korea is well-known.

I was not a fan of the soup. It was only kind of lukewarm and didn't really have any flavor. I also cannot really eat cream very well, so I decided to just leave my taste of the soup as just that, a taste.

I don't have a picture of my dad's spicy donkatsu, but you can imagine it, by just looking at the one I have and imagining the sauce to be red. I tried his donkatsu and I can tell you it is spicy, but not death-level spicy. I can handle a moderate to moderately-high level of spice, but definitely can't handle food like buldak (fire chicken) and this was not at that level of spice. Also, if you order it, you can scrape off some of the sauce if you find it to be too spicy for you.

The pork was definitely too much pork for me. The reason I was having such a hard time deciding between the pork and fish cutlet is because I try to not eat that much pork. I  could have, however, probably finished the entire entree, but I practiced some self-control and fought against my urge to not waste food...probably better for my health. I was kind of worried before going that the breading was going to be overly greasy and that the pork would maybe be overcooked and super hard, but it wasn't at all. I was also worried about the sauce. I am kind of picky with the sauce. I don't like when it is super ketchup-heavy, but luckily this one was not like that at all.

Next time, I will definitely order the fish cutlet and maybe order it as a set.

The pictures do not really do justice in showing how HUGE this cutlet is.

Personally, I think the flavor of the cutlet and the sauce is better than that of the chain stores like Saboten. The food at Myeongdong Namsan Wang Donkatsu is a great value and is definitely worth the experience. 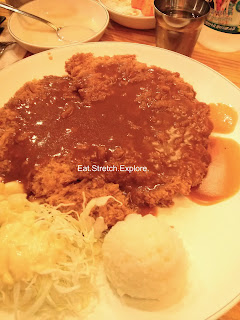