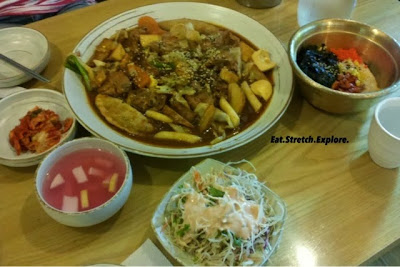 Jjim and Jok is a pretty popular spot for jjimdak and jokbal in the Korea University (Anam) area.
My favorite Korean food is jjimdak, maybe I mentioned it before, followed very closely by bingsu. If you don't know jjimdalk is a delicious chicken dish. If I explain it, I will not do it justice. Do you ever get the feeling that when you describe something it never sounds as good as it tastes?

Basically, this is stewed chicken with vegetables, sweet potato noodles, onions, dduk (Korean rice cakes) and the sauce. You typically also eat it with a side of rice, just because it tastes better and the sauce goes well with the rice..also because it'll fill you up.

One day, I was doing my typical food blog searching right before lunch at my research lab and I stumbled across this place near Korea University. Since my lab was near Cheongyangri, my co-worker and I took the bus to Anam and ate here.

It was super SUPER rainy this day, monsoon season. So, we were the crazy kids walking around during the crazy downpour. We got a little turned around since the bus stop is not exactly near the restaurant and neither of us went to school at Korea University (we were students at Seoul National University, Yonsei University, and Kyunghee University and were working for Hallym University at the time), so we were definitely outsiders.

If you have never been to Anam/Korea University before, it is definitely a strange atmosphere over there. You get this "are we still in Seoul?" feeling. The people kind of act like people who live in the countryside and they have just a different attitude than other parts of Seoul. To answer the question, yes, you are still in Seoul, but you are kind of barely in Seoul.

Well, we had two missions that day. Eat the 사리찜닭 (listed on the menu as "supreme jjimdak") and eat the 알밥 (albap). Then go to 2cha (second location) and eat the fresh fruit homemade ice cream (post to come later).  We succeeded on both fronts, yay!

As always in Korea, side dishes were served. We got kimchi, chilled radish soup, and a salad.

When you order jjimdak, you have the choice between 1/2 chickens, 1 whole chicken, and 1.5 chickens. Which one you order depends upon how many people you are, how hungry you are, and what else you are ordering.

We really wanted the albap because we had never seen albap served with jjimdalk before and because the blogs all made it look so delicious. (Sorry about my terrible photo in this post, this was before I got a new phone, so the phone I was using was about 4 years old...so you know what that means, the camera was terrible). Albap is basically rice with fish eggs and vegetables and has Japanese origins.

When you order the albap, you can choose how many servings you want. We ordered only one because this was lunch and also because of our plan to eat ice cream after lunch.

I have never had jjimdalk with fried dumplings in it and never imagined I would ever have it, but it was definitely good. The dumpling soaked up the flavor of the sauce and the sauce married well with the flavor of the dumplings. Just so you know, the dumpling was pork, so it is not Halal/Kosher. The sauce had a very unique flavor, too. Compared to usual jjimdalk sauce, this one was spicy. It wasn't like you were eating fire, but it was definitely not the typical sweet sauce. Ordering one serving of the albap was definitely a good plan. It was so much rice! The rice was topped with seaweed shreds, the salted/seasoned laver kim that Korea is known for, fried kimchi, and flying fish roe. When it was mixed with the sauce at the end it was a very unique, but delicious flavor and textural combination.

The store also sells other fusion jjimdalk varieties, as well as the original Andong style. I'm sure that they will be made with their uniquely spicy sauce, too. They have cheese jjimdalk, black bean sauce jjimdalk (think jajjangmyun sauce), curry jjimdak, and garlic jjimdalk. They also have samgyetang, dalkdoritang (spicy chicken soup with vegetables), regular chicken and beer restaurant-type dishes, too. It's a one-stop shop.

They also sell dishes that go along with the "jok" part of their name. "Jok" means foot. You can buy jokbal  - boiled pig's trotters here, too. I heard from one of my friends who went to KU as an undergrad that some of her friends have tried it and said it was good here.

They also sell beer, so I'm sure this is a place that KU kids go on the weekend to eat their chicken and beer and also their jokbal.