By marissa December 06, 2013
One of the biggest tourist destinations in York is Betty's. Betty's has an awesome afternoon tea!

This past week I went with a couple of my friends and I know why so many people are willing to wait in long lines to get in. There are actually two Betty's in York. The main one is in in St. Helen's Square, near the Mansion House. It has a main seating area and a basement. We were in the basement, which was nice because it has a little more space.

Depending on when you go, there can be a long line--it wraps around the outside of the storefront. We went in the early evening and had to wait, at most, 2 minutes. They also offer reservations of Afternoon Tea. The second Betty's doesn't have the line but it is also smaller. It is at 46 Stonegate, which is roughly halfway between big Betty's and the Minster.

One of Betty's specialties is Afternoon Tea, which is a selection of sandwiches, sultana scones with jam and clotted cream, miniature cakes and a macaroon, and a pot of Betty's Blend tea. One of my friends ordered it and was surprised at how filling it was. They also offer cheese scones if you prefer a savory option. 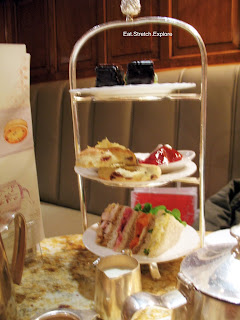 Additionally Betty's offers a full menu, including all day breakfast, a variety of tea and coffee blends, and in-store made baked goods. If you don't want to eat in the store or wait in the line, they have a counter where they sell most of the desserts and teas/coffees, as well as bread.

My other friend ordered a tomato and bacon omelet. She said it was perfectly done and really good. She also got a frangipane for dessert.
I ordered french toast and bacon. I didn't think it looked like a lot of food, but it was filling. There were two slices of thick french toast and three slices of bacon. Both were really flavorful. For dessert, I ordered a chocolate and praline eclair. There was a lot of filling and the chocolate was really good.

Overall, I was really impressed with Betty's and I will be returning. In the lower eating room, in a corner is a mirror that was signed by roughly 600 men from British, Canadian, Australian, and, possibly, New Zealand service members during World War II when the room was a sort of base (mostly for the Canadians). So, if you go, check it out!