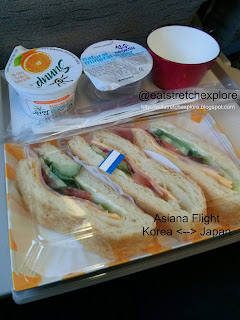 Do you get food on an Asiana Airlines flight from Korea to Japan?

Answer: Yes, you do.

I moved from Seoul to Kansai (Kobe, Japan) in October.
My flight was over the noon hour.

I, being ridiculously frugal, did not really want to pay money for an overpriced airport meal...and I was flying Asiana, so I knew the food should be ok...if I got food.

But, I figured there was a slim chance that I would get an in-flight meal since the flight is a whole 1.5 hours.

But, I did some searching anyway. I could only find information on Korean blog sites, so I figured I would share this as a resource for anyone who is doing some traveling (or moving) from Korea to Japan or from Japan to Korea.

YOU DO RECEIVE IN-FLIGHT FOOD SERVICE!
It's nothing much, but it is enough to hold you over until you get to your destination and can buy real food.

You get a sandwich, orange juice, water, and then tea/coffee service after your meal. They will also offer you some other beverages (soft drinks, I was not offered wine/beer on this flight).

The taste isn't too spectacular, but it's satisfying nonetheless. It's basically a croissant sandwich. I was worried it would have ham on it, since I'm kind of scared of ham, but this sandwich didn't have any. It was mainly vegetables, but did have mayonnaise and sliced cheese.

Now you know, you do receive a sandwich on flights between Korea and Japan.