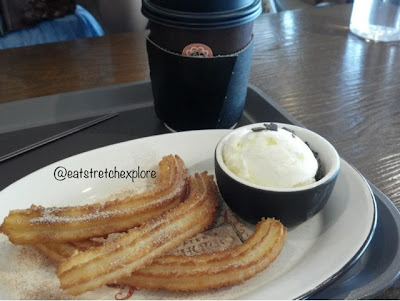 I discovered San Churro about three or four years ago. It used to be the only place where you could get churros in Seoul. It's actually an Australian cafe chain.
However, following recent food trends in Seoul this has definitely changed based solely on the emergence of a lot more churro cafe chains.


I discovered this cafe three or four years ago after my Danish roommate said she was craving churros. I did a quick Naver search and found Chocolateria San Churro. AND, luckily for us, it was in Edae. (We were living in Yonhui-dong - neighborhood next to Yonsei University.)
So, we made a study plan and went and tried out their churros set. 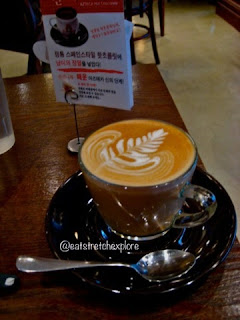 Apart from selling churros, it is also a chocolateria which means you can buy their chocolate bars and chocolates. The chocolate dipping sauces they serve with their churros are also made with their house chocolate. You can choose between three flavors: white, milk, and dark. They also serve Spanish Hot (or Iced) Chocolate. So it's a little bit spicier. I have tried it and it was pretty good. I'm not usually a huge fan of hot chocolate because it's often too sweet, but the spicy element of this hot chocolate is quite nice.
Since Seoul always changes, I did not expect it to be still around last summer, but it was still holding strong. I met up with one of my Korean friends who goes to Ewha. She had never been here before and didn't even know it existed! Unfortunately for us, however, it had gained popularity after being featured on a bunch of Korean network food shows. As a result, the prices for the sets increased and the number of churros you receive decreased.
I went again this year. Yes, it still exists and the prices increased yet again and the portions decreased again! Now you only get three churros per order. 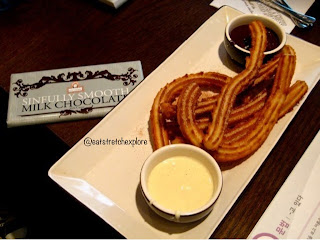 The set menu options are decently/relatively reasonably priced: 1 person set menu (single set): 6,800KRW; This menu includes 3 churros, a scoop of ice cream, and one "long black" aka americano. The "couple set": 11,800KRW; the one person churros item (3 churros) and a dipping sauce, and 2 americanos. The couple fondue set: 19,800KRW; this includes the fondue set (there's a picture on the menu when you are ordering) and 2 americanos
When you order the churros, you have the option of having them topped with either powdered sugar or else cinnamon sugar. I opted for cinnamon sugar each time I have had them, so I don't know how the powdered sugar tastes. The cinnamon sugar is good, but could be more cinnamon-y in my opinion, but it is still good nonetheless.

Oh, there's free WiFi here. One bad thing is the bathroom, though. It's located kind of outside the restaurant and was kind of dirty. You have to get a code/key for the bathroom at the counter. The atmosphere is pretty good and the huge windows overlook a side street in Edae. Great for if you want to gaze out the window during studying. There are TONS of chairs and I have never seen it completely full, so it's a great option if you want to sit somewhere and rest.

They often run promotions on the Korean deal sites. So, if you are living in Seoul and can read Korean or have a friend who can help you out, keep a look out for San Churro on TiMon or other sites like that. I'm all about saving money.

Location:
Ewha Women's University (line 2). Go out exit 2 or 3 and walk down the hill to the university. At the street with Olive Young on one side and LucyCato on the other, turn right. You will walk past Caribou Coffee and San Churro will be on the second floor on your left.